You are in : All News > Memphis Meats rebrands as Upside Foods, announces chicken as first cell-based consumer product 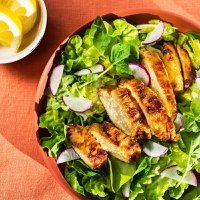 “Our team introduced the world to cultured meat, and the evolution to Upside Foods communicates our passion and potential to make our favorite foods healthier for the planet,” says Uma Valeti, CEO and founder of Upside Foods.

The cell-based trailblazer caught the interest of John Mackey, CEO of Whole Foods, who invested around US$500,000 in Upside.

“This has the potential to revolutionize the way people eat and is incredibly exciting. The world 20 years from now may be completely different due to Upside Foods, which is why I’ve personally invested in the company,” Mackey comments.

“Consumers are hungry for products that are humane, sustainable and delicious, and Upside Foods is meeting them at the center of their plates with meat they can feel good about.”

Chicken without the egg
Grown completely from animal cells, the Upside chicken is real meat cultivated without the need to raise an animal, and is not a plant-based meat alternative. “Our new name showcases the work we are doing to make eating meat a force for good,” says Valeti. 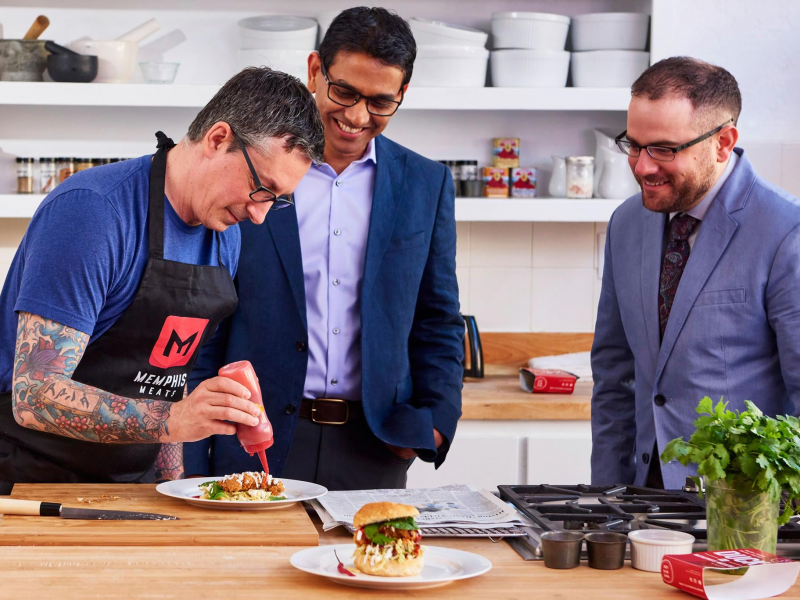 Memphis Meats co-founder and CEO Uma Valeti with chef Derek Sarno. (Source: Memphis Meats)Chicken was chosen as Upside Food’s pilot product because it is deemed the meat of choice for global market. Its versatility lends itself to a diverse set of recipes and culinary applications spanning geographic regions and styles.

To create this sustainable chicken meat at scale, the company has broken ground on a US pilot plant in the San Francisco Bay Area. The company is branding its new site an “international model” for resource-efficient meat.

Pegged as the first custom-built for meat cultivation, this end-to-end facility will produce, package and ship cultured meat “at a larger scale than any other company” all under one roof.

“We wanted our brand to reflect the essence of what our product and company is all about: delicious, sustainable and humane meat for everyone. The future of food is all about activating the upside,” says Maria Occarina Macedo, director of brand and creative at Upside Foods.

Alt-chicken is a reality
Upside Foods is not alone on its ambition to carve a commercial path for cell-based chicken. Cultured chicken meat from Eat Just has been green-lighted for sale in Singapore as an ingredient in chicken bites. The island nation is the first to give the go-ahead to meat being grown in a lab following a rigorous consultation and review process by the Singapore Food Agency (SFA).

In other moves, MeaTech 3D recently revealed its latest move to establish, own and operate a pilot plant to commence scaled-up cultured chicken fat production in 2022. Simon Fried, head of business development at MeaTech, says it is possible that avian cells “could be easier to scale and bring to market,” than other meat cells, such as beef and pork.

Demand for cell-based chicken is linked to the same drivers of demand for plant-based proteins, which appeal strongly to consumers’ sustainable consumption credentials. KFC was the first national US quick-service restaurant (QSR) to introduce plant-based chicken when it tested Beyond Fried Chicken at an Atlanta-area restaurant in 2019 – and has since expanded its operations to China in partnership with Cargill.

Cell-based: a “major part” of future diets?
As first movers in cultured meat are poised for the commercial greenlight, consumer research has affirmed that many consumers are willing to incorporate cell-based meat into their regular diet. Published in the journal Foods, the new analysis goes so far as to suggest that cell-based meat is likely to make up a “major part” of consumers’ future meals.

This recent study revealed “patterns of greater openness” to trying such products by younger generational groups: 87 to 89 percent of Gen Z adults, 84 to 85 percent of Millennials, 76 to 77 percent of Gen X, and 70 to 74 percent of Boomers were “at least somewhat” open to trying cultivated meat.

These positive sentiments toward cultured meat were mirrored in Germany and France, according to separate research also published in Foods, which hinted at similar trends across the broader European foodscape.

Overall, these findings come in line with a recent forecast by Boston Consulting Group and Blue Horizon Corporation, which indicates that consumption of animal-based products in the US and Europe could be on its way down after hitting a “peak meat” apex in 2025.