You are in : All News > Animal-based diets in US and Europe may drop after “peak meat” point in 2025, report forecasts

Animal-based diets in US and Europe may drop after “peak meat” point in 2025, report forecasts

24 Mar 2021 --- Consumption of animal-based produce in the US and Europe could be on its way down after hitting a “peak meat” apex in 2025. By 2035, new research suggests that every tenth portion of all meat, eggs and dairy products eaten across the globe will be from an alternative protein source.

A report by the Boston Consulting Group (BCG) and Blue Horizon Corporation indicates that the meat-free sector is expected to hit US$290 billion in 2035.

It could potentially capture 11 to 16 percent of the global protein market, with nine out of ten of the world’s favorite dishes – including pepperoni and sushi – having “realistic alternatives” by 2035.

Each type of alternative protein is currently at a different stage of parity with conventional proteins, outlines the report.

Plant-based alternative proteins are anticipated to achieve parity by 2023, while those based on microorganisms by 2025, and those based on animal cells by 2032.

“One promising source for ‘superstar’ ingredients like the heme in Impossible Foods’ burgers is precision fermentation.”

Profits aside, the report’s base case highlights that the shift to plant-based meat and eggs alone could save more than 1 gigaton of CO2-e.1 by 2035 – or the equivalent of Japan going completely carbon neutral for an entire year.

Achieving parity against conventional meat
Nick Halla, the senior vice president for international at Impossible Foods, summarizes the issue of parity: “You’ll buy the product once based on novelty, you’ll come back if the taste was good and if there are benefits such as nutrition and sustainability, and you’ll buy it in the long run if the value is right.”

To reach parity, new and affordable taste and texturizing ingredients for meat analogs will be needed. Substitutes for commonly used binding agents like gelatin and egg whites need to be found.

In targeting naturality, ingredients such as methylcellulose – a chemical used as a binding agent in many industries – are becoming less popular.

To reach parity, new and affordable taste and texturizing ingredients for meat analogs will be needed.Meanwhile, experimentation to scale texturizing capacities to compete with conventional meat is still expensive. Highly skilled extruder operators must be able to experiment with large batches of product and adjust many parameters in order to perfect the final texture.

This can generate “very realistic fibers” and are well-suited for small- to medium-scale manufacturing of specialized products. This offers the potential for “radical decentralization” – gourmet restaurants might even be able to make bespoke alternative-protein dishes right in the kitchen, the researchers note.

Made by microorganisms
Microorganism-based alternatives are at second place in the race to reach parity. These include proteins produced using bacteria, yeasts, single-celled algae or fungi that are flavored and texturized into edible products.

Nature’s Fynd is among the emergent players in this novel space. The company has unlocked the yeast-like properties of microscopic extremophiles sourced from the geothermal springs of Yellowstone National Park in its creation of dairy-free and meatless cream cheese and breakfast patties.

Microorganism-based proteins, however, have a way to go before they fully reach taste, texture, and cost parity with conventional animal proteins.

At present, the report highlights that this food source still costs two to three times greater than that of conventional proteins, especially for precision fermentation. 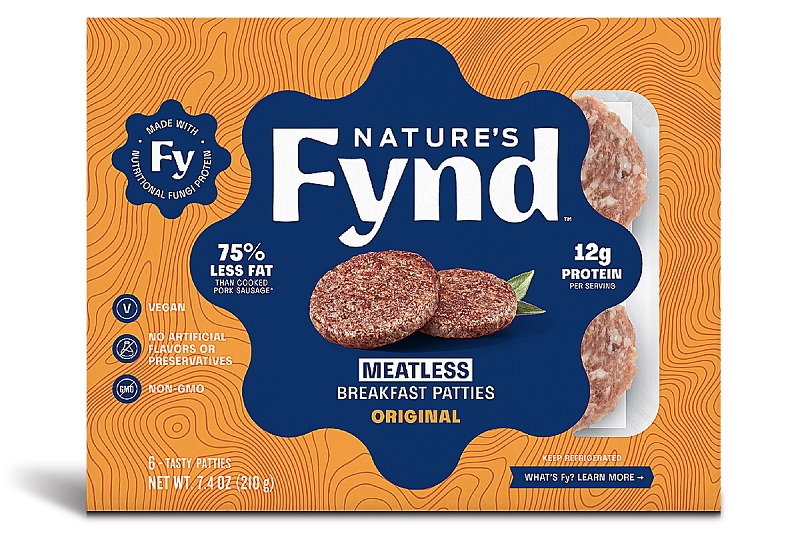 Nature’s Fynd unlocked a new class of protein production aided by volcanic microbes in the rollout of its new dairy-free and meatless breakfast range. (Credit: Nature’s Fynd)The greatest potential for cost reductions will come through progress made in the first two steps of sourcing and growing the right organisms, note the researchers. Improving the metabolic efficiency with which microorganisms convert their feedstock into protein is key.

“It took us six weeks to find the right microorganism and 20 years to get the process to work reliably at scale,” details Kevin Brennan, Quorn’s  former CEO.

Another major factor in bringing down the cost of microorganisms involves finding a carbon feedstock that is less expensive than the glycerol and glucose commonly used today.

Scotland’s 3F Bio, for instance, is experimenting with growing microorganisms on byproducts from other processes, such as ethanol production.

Using a byproduct as feedstock for fermentation not only lowers cost but also opens up the possibility of even greater sustainability than plant-based proteins.

“If sustainability is your long-term game, then fermentation is the future,” says Brennan.

Scaling up cell-cultured meat
Products grown directly from animal cells, including “cultivated” meat and seafood, are already beginning to appear on the market, although the BCG-Blue Horizon report indicates it may take some years before they reach parity with conventional animal proteins.

Other companies around the world are hot on their heels, currently testing a variety of products, including cell-based shrimp meat for dimsum. The cost of making cultured meat is still substantially higher than for conventional meat, however.

“We are looking at taking cells from young versus older animals, different tissues, and so on, to produce meat on microcarriers in suspension bioreactors,” says Dr. Steve Oh, chief scientific advisor at SingCell.

“Then we can also think about modifying the cells so they produce fewer byproducts like lactate, which can become toxic to the cells if too much of it accumulates in the very high density cultures that we achieve.”

Fiber formation can be induced by seeding cells on so-called scaffolds: edible structures made from polymers produced in plants, microorganisms, or even texturized soy protein. Companies differ considerably in the type of scaffold they use.

Aleph Farms, for instance, grows its thin steak slices on a scaffold of a material it claims is “something natural and recognizable.”

Other companies use no solid scaffolding at all. SuperMeat grows its chicken cells in suspension without scaffolds – the cells mature into meat tissues while excreting their own natural scaffolding.

Mosa Meat creates a viscous environment in which its cells should eventually be able to differentiate into the various types of muscle and fat needed to make structured meat.

Further developments in the cultured meat space could even exceed the standards set by animal protein, such as by removing unhealthy saturated fat, for instance.

As Paul Shapiro, author of Clean Meat, points out: “If people ask whether I have concerns around the health effects of eating cultivated meat, my answer is the same as for conventional meat – there is too much saturated fat.

“But with cultivated meat, the difference is we can change that. We should strive to make something better than meat.”