You are in : All News > Pushing into plant protein: Pork heavyweight Smithfield Foods debuts soy-based line

“We’ve been exploring the alternative protein space for a while and have taken our time to get it right,” says the world’s largest pork processor

14 Aug 2019 --- Smithfield Foods, a US-based pork processing giant and wholly owned subsidiary of Hong Kong-listed WH Group, has launched a soy-based protein portfolio under its Pure Farmland brand. This is one of the latest examples of a meat heavyweight entering the fast-growing market for plant-based protein as the trend for meat reduction continues to gather pace. The new product line, which will debut in US supermarkets in September, leverages the popularity of plant-based offerings in the growing “flexitarian” movement, according to the brand’s executives.

“We’ve been exploring the alternative protein space for a while and have taken our time to get it right,” John Pauley, Chief Commercial Officer for Smithfield Foods tells FoodIngredientsFirst. “We know that soy is a complete protein, providing levels of all essential amino acids that many other plant proteins do not provide. We also knew we wanted to launch with not one, but an entire portfolio of products to help consumers grow their plant-based protein options for any meal occasion.”

“At its core, Smithfield Foods is a global food company with a focus on protein. The plant-based protein space is growing rapidly, and more consumers are actively trying to consume less meat, including traditional “meat lovers” as well as flexitarians. In response to this, Smithfield Foods has launched a new plant-based protein portfolio under its Pure Farmland brand. The full portfolio of products can accommodate all meal occasions, including breakfast, lunch, dinner and appetizers,” he explains. 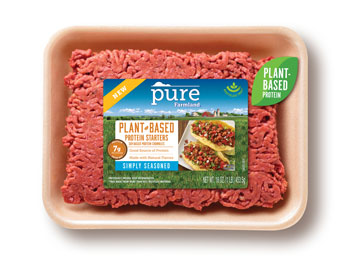 Smithfield Foods, which was founded in 1936 and is the largest pig and pork producer in the world, joins other leading meat producers who have ventured into plant-based offerings to leverage their popularity. In February 2018, Tyson Foods completed a second investment in alternative meat production. The US meat processor previously snapped up a five percent stake in a Los Angeles-based producer of plant-based meat substitutes, Beyond Meat in 2016.

Other big names in plant-based foods include Maple Leaf Foods, which has various acquisitions and launches in the plant-based space; chicken producer Perdue Farms, with its hybrid chicken-vegetable nuggets; and McCain Foods, in its strategic partnership with NUGGS to develop a plant-based chicken nugget alternative.

Pure Farmland products are offered in sustainable packaging with trays “made from more than 50 percent recycled material.” The brand is in a partnership with the American Farmland Trust, an organization committed to the conservation of arable land, promotion of sound farming practices and the support of farmers. With each package sold, the brand will be donating the cost of protecting one square foot of farmland (2.1 cents per unit).

Harvested from soil, refined by techClick to EnlargePlant-based innovation is gaining traction in line with the "slaughter free" meat reduction trend.
Plant-based innovation, particularly in soy offerings, is gaining traction in line with the buoyant “slaughter-free” meat reduction trend. As tech speeds up, the gap in between traditional meat products and plant-based analogues is shrinking. This shift in food diversity has not been without complexities – in the EU, MEP’s have proposed a ban to prohibit plant-based products from using names that have typically been associated with meat products and preparations, such as “steak,” “sausage,” “drumstick” and “burger,” reserving these terms for exclusive use on meat-derived products.

Despite regulatory headwinds, the plant-based movement barrels forward, reinvigorated by advancements in tech. In the US, the Food and Drug Administration recently approved soy leghemoglobin as a color additive in uncooked ground beef analog products. This follows plant-based player Impossible Foods’ 2018 petition to have the ingredient accepted as a color additive in its offerings that “bleed” like actual meat. Soy leghemoglobin imparts a reddish-brown color but has already been used by Impossible Foods as the “magic ingredient” to give an optimized beefy flavor.

In July, Israeli startup Equinom Ltd. developed a “strictly non-GMO” methodology for the seed-breeding of soybeans. The practice incorporates computational breeding technology, proprietary algorithms and big data analysis to develop multi-trait crops that pack high nutritional value while offering ample flavor. With this method, the company is hoping to transform the soy industry from an “idling commodity” to a value-added “breed-for-purpose” market.

Also in July, a meatless hamburger infused with Cannabidiol (CBD) was debuted by North American Cannabis Holdings and Kali-Extracts in a partnership with West Coast Venture Group, Corp. The three companies are targeting the intersection of the US$16 billion CBD sector and the US$9.5 billion plant-based protein sector with the introduction of the hamburger in the US.

23 Jun 2021 --- Flavor house Firmenich has debuted Dynarome TR as the latest addition to its proprietary SmartProteins technology portfolio. The solution is designed to deliver a... Read More

Spotlight on snacks: Plant-based preferences are rising, focus on health and better-for-you options

21 Jun 2021 --- Propelled by the COVID-19, consumers are taking a more proactive approach to their holistic well-being, which is impacted by what they are seeking in snacks.... Read More

21 Jun 2021 --- Salt of the Earth is zeroing in on lentil-based snack bites as an ideal application for its latest flavor enhancing ingredient launch, Mediterranean Umami Bold. The... Read More