You are in : All News > Food raw material prices significantly decline, but not quickly enough for inflation-ridden markets

11 Jul 2022 --- For the third month in a row, food prices have decreased but still remain prohibitive in many countries where inflation has become the root of market instability for vulnerable markets, such as Sri Lanka.

The Food and Agriculture Organization of the United Nations (FAO) reports that cereals, sugar and vegetable oil prices are at their lowest level since the start of the Ukraine war.

However, the market is still showing mixed signals as meat and dairy prices have effectively hit all-time highs.

“It is a positive sign in general. We don’t want to comment or speculate on prices. Still, we believe this has to do with the updates on the ongoing harvest outcomes and the significant effort by farmers and other agri-food chain actors to answer to the market disruptions,” a spokesperson of European agri-food body Copa-Cogeca tells FoodIngredientsFirst.

The FAO Food Price Index averaged 154.2 points in June, a 3.7 percentual points decrease, offering evidence of a downward trend, which started with a 0.5 point reduction in May and a 1.3 point drop in April. However, the index still remains 13.1 percentual points higher from the start of the war.

Meat and diary reached all-time high prices this June, with future price surges on the horizon.Vegetable oils blow off top
The most positive data point from June’s food price data is that vegetable oil prices are easing from their stratospheric price high reached in March (of 251.8 points compared to 211.8 at present).

While prices continue to be more than double those from 2020, the braking trend will likely sustain.

“We believe [the slowing trend] has to do with availability, which has improved, due to the ability of Ukraine to still export certain quantities and the rebalancing of the market with certain rules and actions put in place following the disruptions in this market after the breakout of the war,” says the Copa Cogeca’s spokesperson.

Production efforts have raised the stockpiles of the commodity across its largest producers.

The Malaysian Palm Oil Board put the country’s palm oil reserves at a year high, with official stocks reaching over 1.5 million metric tons.

Indonesia holds so many reserves that it will implement a mandatory 35% palm oil mix by the end of July for its biodiesel, up from the current 30% blend, according to Dadan Kusdiana, a senior energy ministry official.

A 40% mix would help absorb an additional 2.5 million metric tons of palm oil.

Indonesian authorities have been struggling to empty their stockpiles generated during its short-lived palm oil export ban. The country has done a complete u-turn on its strategy and is now bumping its exports and even cutting levies for exporters, according to data from the country’s trade ministry, which aims to stabilize prices.

Cereal prices dip Vegetable oil prices are starting to offer some relief as stockpiles in Indonesia and Malaysia are bountiful.
Prices for cereals fell 4.1% from May but remain 27.6% higher than last year. In the case of wheat, prices fell 5.7% but still remain 48.5% higher than June 2021.

“The decline in June was driven by seasonal availability from new harvests in the northern hemisphere, improved crop conditions in some major producing countries, and higher production prospects in the Russian Federation,” says FAO.

Last June, the FAO Cereal Price Index reached an all-time high, with the UN organization signaling that the cereal demand is outpacing its supply.

FAO continues its efforts to liberate the Ukrainian grain trapped in the country’s silos due to the Russian blockade of Black Sea ports. The organization’s latest effort consists of a Japanese initiative to raise Ukrainian grain storage capabilities with polyethylene grain sleeves mobile silos.

Turkish authorities believe that a deal to liberate the trapped grain could be weeks away.

“World prices across all meat types increased, with those of poultry meat rising sharply, reaching an all-time high, underpinned by the continued tight global supply conditions impacted by the war in Ukraine and the avian influenza outbreaks in the Northern Hemisphere,” explains FAO.

Meat was in focus during the recent 4th of July celebration in the US, as the most affected commodity by inflation compared to last year. Barbecue staples such as ground beef rose in price up to 36% this year.

US farmers still think meat prices need an uptick to cover costs, a concern that was also voiced by UK pig farmers, who complain about cheap pork prices even when they are at historic highs.

The case of dairy, also at all-time high levels, is worrisome as its prices accelerated last month three times faster than in the case of meat. 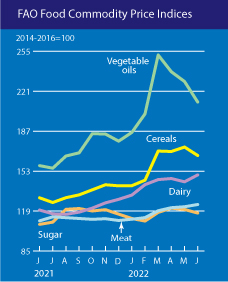 The FAO Food Price Index in June averaged 154.2 points in June, a 3.7 percentual points decrease from May. (Credit: FAO).Sugar a class of its own
The last commodity analyzed by FAO is sugar prices. The sweet ingredient continues to show extraordinary resistance to inflation pressures, although this might change.

“The factors that drove global [sugar] prices high in the first place are still at play, especially a strong global demand, adverse weather in some major countries, high production and transportation costs, and supply chain disruptions due to COVID-19, compounded by the uncertainties stemming from the ongoing war in Ukraine,” says Máximo Torero Cullen, chief economist, FAO.

European sugar farmers admit they are struggling, even acknowledging that they are “going from one crisis to another”. This forced them into a battle to stop India from trading its cheap sugar inside European markets and avoid price competition, which would not benefit producers.

Sri Lanka the first one to fall
Officials in Sri Lanka have warned that severe food shortages would occur this August, while over six million island citizens are already in food-insecure circumstances.

This past Saturday, local protesters broke into the Presidential Secretariat and the Prime Minister’s official residence in the country, forcing the executive branch leaders to flee and later announce their resignations.

Authorities pleaded with farmers to focus on rice production to avoid an even worse situation.

Last week, The UN warned of what they called Sri Lanka’s “misery”, saying it “should be warning us all on the global food, fuel and finance crisis.”

The country defaulted on its debt last June; without access to international markets, not enough nutritionally diverse food is entering the country, putting some segments of the population such as expecting mothers, in severe health risk situations.