You are in : All News > Complicity or necessity? The agri-food corporations staying in Russia

Complicity or necessity? The agri-food corporations staying in Russia

Ukrainian agriculturalists plead for total Western divestments from Russia, but many industry players say leaving will do more harm than good

04 May 2022 --- As the war in Ukraine rages on, major Western companies are coming under increasing scrutiny for continuing business dealings with Russia despite the raising of sanctions and divestments by governments and industry worldwide.

Some of the West’s biggest players – including Lactalis, Agrana and Mondi have refused to leave the country. Others, like ADM, Cargill and Barry Callebaut, have announced the scaling down of nonessential operations or halting capital investments. Many say that abandoning business in the country would only bring further harm to innocent people and have no impact on the war or those in power.

Members of Ukraine’s agricultural sector dispute this and have echoed the call made by President Zelenkyy to abandon Russia entirely and immediately or continue operating in a market “flooded with our blood.”

Mariia Didukh, director of the Ukrainian National Agrarian Forum (UNAF), tells FoodIngredientsFirst the support given to Russia is helping cement the country’s power over the market while it destroys that of Ukraine.

“Our farmers’ situation is the following: some unoccupied regions could cultivate the land, but unfortunately, areas in the east cannot operate. It’s impossible to work because of landmines and a lack of agricultural inputs.” 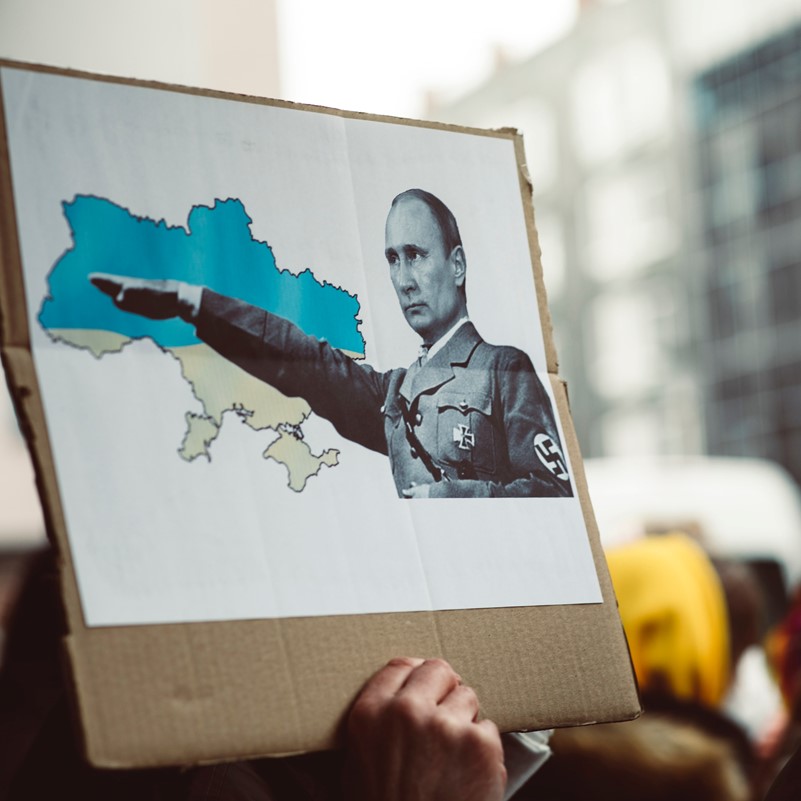 The UNAF says it received no responses after pleading for an end to business dealings in Russia.Divestments to end the war?
Didukh wrote a letter in early March on behalf of UNAF to 27 major companies, including ADM, BASF, Cargill, and Olam, telling them complete divestments would help end the war.

“Today, all resources of the state, business, and communities are aimed at combating the Russian aggressor. The armed forces and citizens are defending Ukraine, defending freedom and all democratic values till the very end. The whole world is resisting the aggressor by imposing targeted sanctions to stop the war. We need your support in these difficult times,” reads the letter.

“We urgently appeal to you with request to stop the supply of your products to the Russian Federation as well as services until the Russian Federation fully withdraws its troops from Ukraine and fully compensates for the terrible damage caused to Ukraine. We are confident that such actions will help Russians understand the consequences of Putin’s crimes and will contribute to the end of the war.”

Didukh says that none of the companies UNAF contacted responded.

The UNAF’s members cultivate more than 10 million hectares and make up more than 50% of Ukrainian agricultural production, representing more than 75% of the agricultural machinery market, 50% seeds market, and crop protection products in Ukraine.

Feeding Russia, feeding the world?
An ongoing tracking poll by the University of Yale, US, has found at least 216 companies are “digging in” and “defying the demand for exit or reduction of activities.”

Many of these companies are involved in the food and agriculture sector, which is a key area of concern as much of the world – primarily MENA states – rely on the production and distribution of grains in the region to avoid starvation.

One such company, Agrana, tells FoodIngredientsFirst: “We are attempting to continue performing our tasks as a supplier of essential foodstuffs and meeting the food requirements of the local population. A withdrawal from the Russian market is therefore not planned at present. We also see ourselves as bearing an obligation to our local personnel in our role as an employer.”

“A closure would have no impact on those responsible for the war. We fully support the political sanctions imposed on Russia and have in addition decided to refrain for the moment from making further investments in Russia,” says the spokesperson. Continuing food production and supply in Russia is the humanitarian course of action, according to companies remaining in the country.

Other companies, like ADM, Cargill and Olam, have made similar sentiments. ADM is expressing its “horror” at war and has pledged to “scale down” its “very limited” footprint in Russia. Cargill says it is “scaling back” but will continue its food and facilities because “hunger should never be used as a weapon.” However, quarterly reports show grain traders are making substantial profits from the supply and demand shift caused by war, with ADM’s shares rising 30% this year.

Barry Callebaut has suspended capital investments in Russia but says it continues to supply food products to Russian people because “chocolate is part of the daily diet for many.”

Olam continues to supply milk from its dairy farm to its customers in the domestic market in Russia and is committing US$5 million to emergency aid initiatives with international partners, including the World Food Programme and UNICEF. BASF has also pledged to donate €1 million (US$1.08 million) in emergency aid to the Ukrainian people.

Rebuilding Ukraine
The UNAF dismisses these excuses and charitable donations as insufficient and asserts abandoning all dealings in Russia will create public dissent against the regime. Didukh also says the international community should focus on the long-term rebuilding of Ukraine’s agricultural sector rather than continuing deals with the Kremlin.

“In the best-case scenario, if Russia were to leave Ukraine tomorrow, we could still produce up to 70% of our agricultural capacity. However, even if we could sow that amount, we no longer have the production technology, and many farmers have joined the army,” she explains.

“Nobody knows the worst-case scenario yet.”

Reports from Eastern Ukraine indicate that invading Russian forces have stolen Ukrainian agricultural equipment, grain and building materials worth an estimated US$5 million – some of which were shipped to Chechnya, according to investigations by CNN.

The European Commission recently announced an €836 million (US$903 million) scheme to build Polish agriculture to substitute the lost production capacity in Ukraine. Established under the Temporary Crisis Framework, the budget aims to boost output in the EU and mitigate the impact of increased costs on farmers and consumers throughout the continent.

Similar talk of a “Marshall plan” style aid packaging for rebuilding the Ukrainian farming sector is also underway. Still, with the war ongoing and the outcome uncertain, little can be effectively organized.

Unconfirmed reports have surfaced that the Ukrainian government is working with the UK to estimate the cost of infrastructural damage incurred by the war for a mass aid request once the violence ends.

BASF Human Nutrition is a global food and health ingredients supplier. Through our high quality and wide ingredient portfolio, we provide the right nutrients to the right people at the right time. Our health ingredients are based on a combination of scientific approach, technical and application expertise that contribute to leading healthy and active lifestyles. Our product range comprise vitamins and carotenoids, plant sterols, lutein, omega-3 fatty acids and conjugated linoleic acid for use in dietary supplements, functional foods and as colorants for food and beverages. Furthermore, we offer a comprehensive food performance ingredient portfolio which include emulsifiers, aerating systems and whipping agents that enhance the texture and taste of baked goods and desserts. For more information, visit www.basf.com/human-nutrition

Our vitamins and carotenoids enable you to enhance your dietary supplements, functional drinks and health food products with attractive additional benefits. You can choose from a wide range of premium quality natural and nature-identical formulations that we can supply in industrial quantities with absolute reliability. For example, LycoVit® is our nature-identical red carotenoid: it can be used as a coloring in drinks and food products, but it is also a powerful antioxidant which protects human cells by counteracting the damaging effects of free oxygen radicals applicable for dietary supplement concepts.

Our health ingredients will ensure that your products don’t just taste great, but also support good health, boost energy and help to ensure health in old ages. For instance it has been shown in clinical trials, that our Tonalin® CLA conjugated linoleic acid has a positive effect on lipid metabolism, and as such delivers body shaping benefits for your customers.