You are in : All News > Climate crisis: Blazing heat scorches agriculture, overheats livestock and burns out farmers 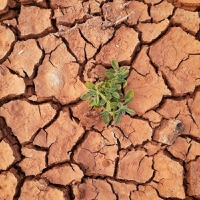 26 Jul 2022 --- A blasting heatwave in Europe and North America is ravaging crops, potentially impacting yields and harvests, while record temperatures continue to be the daily norm around the world. The ongoing extreme weather also affects cattle as livestock suffers in the heat.

Globally, farmers are facing tough times while climate-crisis mitigation methods are being innovated as the agri-food industry fights back against the rapid onset of a warmed Earth and its impact on food supplies. However, more must be done to secure crops and sustain food production systems to feed the growing population in the face of even more global warming.

US ranchers are reporting severe damage to their livestock with some simply dropping dead from heat exhaustion in places like Kansas.

Meanwhile, fears are growing that the three key crops - wheat, maize and rice - that make half of the food supply, are increasingly vulnerable to droughts.

Questions are being raised over just how much the food crisis - already impacted by supply chain issues caused by the war in Ukraine, and a range of climate-related problems, inflation and other aspects - will be able to withstand.

Fears are growing that the three main crops - wheat, maize and rice -  are increasingly vulnerable to droughts.“If temperatures exceed the crop’s optimal range, yields will drop because heat stress can disrupt a plant’s pollination, flowering, root development and growth stages. If such extreme weather events continue for another three to four weeks, it will adversely impact the global food value chain and worsen the food shortage concerns worldwide,” says Fabio Vescovi, agronomist and data scientist at Cropin, an agritech company.

Dry weather has decimated dijon mustard crops in Canada and France; with fewer production, consumers are paying up to 75% more for Dijon mustard. Reine de Dijon, a french mustard player, told FoodIngredientsFirst that the company is researching more resistant seeds and even expanding its production to diverse regions of France, avoiding putting all its eggs in one basket.

Huy Fung Inc California plants halted the production of its pepper-based sauces due to severe weather conditions affecting the quality of chili peppers. The company has battled pepper shortages in the US and Mexico since 2020 due to climate shocks.

Weather shocks have also been used as a political tool. India suffered its hottest March on record, leading the Indian government to slash wheat production estimates by 5.7%. While UN economist for the Food and Agriculture Organization (FAO), Monika Tothova, told FoodIngredientsFirst that India could still handle substantial exports, the country applied a wheat export ban justifying it on extreme weather.

Mitigation efforts
Farming efficiency must be exploited to maintain the same production levels.

“From crop and seed selection, choosing the right time for sowing and harvesting, and adopting the right farming practices, can help address and even reverse the adverse impacts of climate change,” explains Cropin.

Climate mitigation through science advancements will help reduce the toll of climate change.

Cropin also hails the importance of monitoring soil conditions, resource availability and weather conditions. Farmers can make use of real-time data from satellite imagery to find over and under irrigated regions.

Post-harvest, efficient supply chains that minimize food waste can’t be overlooked, companies have continued fighting food waste despite the many other issues they are facing.

‘Super seeds,’ also might be one of the key components in cutting the climate’s negative impact on crops.

Even some crops that started to be abandoned, such as mint, can be revitalized with modern cultivation practices. Mane Kancor Ingredients used a scientific approach to milt cultivation, and farmers increased their yield by 20%, reduced their cost of cultivation by 20% and the need for irrigation by 25%.

The UK reached 40℃ last week for the first time on record.Field intelligence raises funds
Arable, a data-driven agriculture player, has raised US$40 million in a Series C round of investment, using the funds to advance resilience in agriculture and new product development.

In order to optimize water use, Arable uses sensors to view the weather, soil moisture and irrigation that provide a complete view of the state of a crop. The business affirms it has helped “reduce irrigation by up to 50% through this approach while keeping yields and quality consistent.”

Arable is also tackling crop protection from pests and disease; using the company’s sensors, they boast that companies can reduce pesticide use by 15%.

“From talking to farmers and agricultural producers worldwide, it really feels like we are at a tipping point. There is an urgent need to improve the productivity and sustainability of farming while at the same time making these systems more resilient to a changing climate and landscape,” says Jim Ethington, CEO of Arable.

“Arable is focused on building the tools for the next generation of agriculture that can unlock productivity through data and digital tools while helping secure farmers’ livelihoods and a stable food supply,” he highlights.