You are in : All News > Pairwise and Tropic Biosciences leverage base editing technology to boost banana and coffee crops 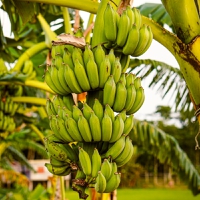 Pairwise’s base editing allows for targeted changes to DNA. This precision is said to help breeders access traits that were previously not feasible with earlier editing technologies, unlocking a greater scope of natural variation found in these crops.

In February 2021, Pairwise raised US$90 million in a Series B funding round.Raising the bar for bananas and coffee
Given the dual pressures of climate change and disease, Tropic claims that the fruits of its labor could benefit more than 25 million coffee and banana growers worldwide.

Tropic is working on the big-acre, tropical crops of bananas, coffee and rice, using its GEiGS technology and other advanced breeding techniques.

“This deal with Tropic Biosciences is an important step in the development of new varieties of tropical crops upon which billions of consumers and tens of millions of smallholder farmers rely, and further demonstrates the ability of our platform technologies to solve problems across the plant-based economy,” remarks Ian Miller, chief development officer of Pairwise.

“Gene-editing is a once-in-a-generation type of innovation and adding this powerful suite of base editing tools to the Tropic Biosciences toolbox will further support our efforts to address pressing challenges in bananas and coffee,” adds Gilad Gershon, CEO of Tropic.

Unlocking a greater scope of natural variation
Pairwise initially licensed base editing technologies from Harvard University, US, and has established proof of concept for the use of that technology across its portfolio.

Pairwise is currently developing new types of leafy greens, berries and cherries for consumers in the North American marketplace.

“We have made significant strides in our two key focus areas, row crops and produce, and have demonstrated the ability to transform and edit 11 crops to date,” the Pairwise spokesperson details.

“For row crops, we are focused on corn, soybeans, wheat, cotton and canola, and have made significant advancements to address critical challenges for these crops’ growth and sustainability in our current world.”Pairwise has a US$100 million, five-year collaboration with Bayer Crop Science to advance gene-editing tools in row crops.

Additionally, Pairwise has a US$100 million, five-year collaboration with Bayer Crop Science to advance gene-editing tools in row crops.

In February 2021, Pairwise raised US$90 million in a Series B funding round, bringing its total fundraising to US$115 million when combined with the series A funding round.

Tailored crops
In other recent genomic science advancements, scientists from KeyGene, Wageningen University and Research and Japanese breeding company Takii are nearing a solution for breeding stronger crops faster with the discovery of the PAR gene that requires no pollination.

In the UK, the nation’s Department of Environment, Food and Rural Affairs released changes to the regulation of genome-edited plants to enable “freer R&D” when using the technology. Last September, the British government announced plans to relax its policy on gene-editing to help local farmers grow more pest-resistant, climate-resistant and nutritious crops.