You are in : All News > Chocolate pedigree: Cadbury descendant presents Love Cocoa brand at ISM 2020 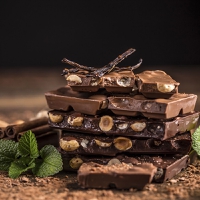 07 Feb 2020 --- Brands with a story to tell is a significant trend taking industry by storm, with Innova Market Insights naming “Storytelling” as the top trend of the year. At ISM 2020 in Cologne, Germany, FoodIngredientsFirst speaks with a direct Cadbury descendant who took it upon himself to continue the ethical and delicious history the family name carries. James Cadbury started his own chocolate brand, Love Cocoa, with a strong sustainability profile and penchant for innovative chocolate flavors. The company showcased its new line at the show and is planting one tree for every bar sold while focusing on reducing sugar content in its formulations.

“I wanted to set up a chocolate brand and really focus on what Cadbury did when they first started, meaning being very ethical and sustainable, while also being a premium market member,” James Cadbury, Love Cocoa’s Founder and great-great-great-grandson of the original John Cadbury, explains.

Love Cocoa is a UK brand with a story that attracts attention fast. Cadbury is one the biggest names in chocolate, and the brand is a leader in the UK market. Formerly Cadbury’s, the British multinational has been wholly owned by Mondelēz International (originally Kraft Foods) since 2010. It is the second-largest confectionery brand in the world after Mars. Love Cocoa, however, is following the footsteps of the original family brand.

“My triple great grandfather started Cadbury’s chocolate back in 1824 and he is the inspiration behind me getting into the chocolate business. Cadbury’s was a small grocery store, which eventually started selling hot chocolate,” Cadbury reveals.

James Cadbury showcased Love Cocoa's new range of chocolates at the company's booth at ISM 2020 in Cologne, Germany.“As they became popular, the store created a chocolate bar. No one at that time knew how to create a chocolate bar and Cadbury had a competent chemist who developed a chocolate bar that was pure, more than anything else in the market. From that level, the company grew and grew, always with an ethical approach to everything it did,” he adds.

“We feature a stand out design and a new sustainable message for our consumers. For every bar we sell we plant one tree, and we have created our branding and packaging to showcase that.”

Using the name as a marketing tool, the brand joined a popular British investment show to source funding but ended up declining the funds and venturing into the chocolate business independently. Cadbury says the storytelling behind the brand boosted business significantly.

“People love the story, and we have had a lot of support. We wanted to get the story across and we went on Dragon’s Den, which is kind of like Shark Tank in the US. That got the story across then really well and since then we have grown a huge amount, so people definitely liked the story the company carries,” he asserts.

Chocolate innovation
The news comes as the chocolate sector continues to flourish, with innovations such as Ruby chocolate and the use of whole fruit cocoa bean to tackle sugar reduction. Vegan milk chocolate is another significant trend with key chocolate players trying to achieve the perfect creaminess. Also at ISM, industry heavyweight Barry Callebaut presented a vegan milk chocolate that is touted as emulating the texture of milk chocolate bars successfully.

A sustainable approach
Beyond its background, Love Cocoa is establishing itself as a sustainable brand with multiple moves in that direction. “We have always been ethical and sustainable as a brand and we offer 10 percent of our profits to the Rainforest Foundation and when we asked people about whether they knew about it, then we found out that no one really picked up that we were doing that,” Cadbury further explains.

“These trees are actually planted in Cameroon by cocoa farmers, and the farmers are paid for it. This way we are trying to give back and also we want to go carbon neutral and reduce environmental impact,” he adds.

The brand’s design is also sustainability-oriented. The bars are now square, in the spirit of being “fair and square,” and having that link to the environmental approach, according to Cadbury. “We have used color but in a minimalist way as well. People can see the chocolate as well, so we have windows in some of the bars, where it made sense,” he says.

Reducing sugar and adding texture
Sugar reduction and vegan trends are influencing the chocolate business more than ever and Love Cocoa has recognized this. The company has also reduced sugar and put more cocoa in its chocolate.

The brand's innovative flavors include avocado chocolate and birthday cake, which is a hit in the US but still not well-known in the UK, Cadbury says.“Before, we were at a 30 percent cocoa level but we are now up to 41 percent, as part of our sugar reduction goals. Our dark chocolate also has less sugar than a milk chocolate and consumers are seeking at least a 70 percent cocoa chocolate as a standard product. We are now in the process of developing an 85 percent and a 100 percent bar. We haven’t achieved the 100 percent yet as it is a very bitter product, but people are seeking to reduce the sugar content so we are actively looking into it,” Cadbury notes.

“This also falls under the vegan trend which is huge in the UK and we are trying to tap into that market as well. Dark chocolate is naturally vegan but a lot of vegan consumers want a nice creamy texture in chocolate, so we started using oat milk to achieve that,” he adds.

In the flavors department, the brand is shooting for new flavors that consumers seek, as well as maintaining the appeal of classics.

“Premium products means special flavors, and we have some of those, such as avocado chocolate and the birthday cake flavor that is a huge trend in the US, but no one has really caught up with it in the UK yet. So we are trying to innovate with new interesting flavors beyond our classic ones which are currently performing very well,” Cadbury concludes.

Storytelling was a pronounced trend in the ISM/Prosweets this year, and FoodIngredientsFirst reported on the matter with companies presenting different ways of using storytelling as a key marketing tool to boost their sustainability product profiles.