You are in : All News > The epitome of guilt-free eating? Meat alternatives entice two-thirds of US consumers, reports Innova Market Insights

17 Sep 2019 --- As many as 10 percent of Americans claim they always buy meat alternatives, while a further 36 percent claim to do so often or sometimes. This is according to new consumer research conducted by Innova Market Insights, which highlights how pervasive the trend has become in a relatively short time. The survey also found that only 22 percent purchase from the category on rare occasions.

“I think part of the appeal now is the discovery. It’s a new and interesting trend and many people are experimenting. But the products are improving so fast that I think many consumers will adopt the products and become repeat customers,” Lu Ann Williams, Director of Innovation at Innova Market Insights, tells FoodIngredientsFirst.

Ethical and environmental concerns are increasingly influential in the consumer purchasing behavior of meatless offerings, which adds new considerations to the marketing of meat alternatives. “Meat substitutes should now carry the right messages for both healthful and mindful customers, with plant-based diets emerging as the epitome of guilt-free eating,” suggests Williams. 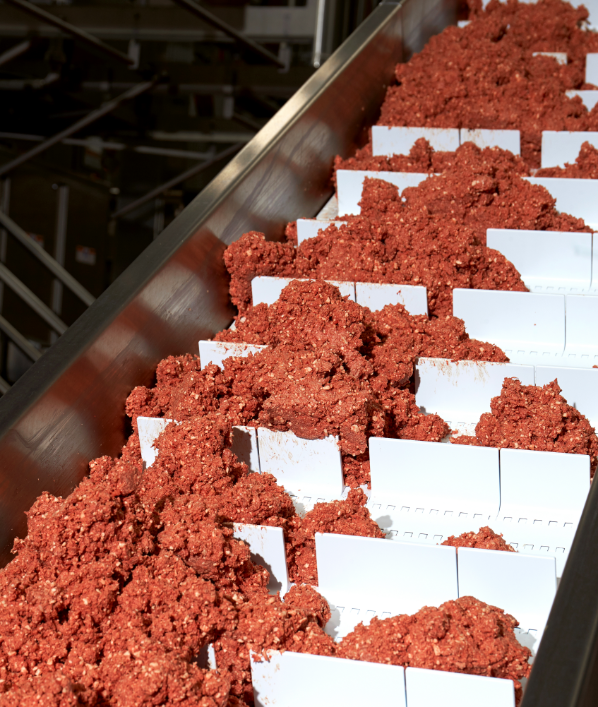 Click to EnlargeSoy leghemoglobin is used as a colorant and flavor enhancer in meat analogues.Innovators in this market have recognized the rise of veganism – particularly within younger age groups – and almost three-quarters of new meat substitutes launched in the US in 2018 carried vegan claims. But the need to balance this with flexitarian demands is clear: in earlier research conducted in 2017, only 14 percent of meat alternatives purchasers named vegetarian/vegan positioning as a factor influencing their purchasing decision, with higher levels of interest in simpler claims related to naturally healthy formulation.

Meanwhile, the percentage of occasional meat purchasers represents flexitarians who choose to cut down on their meat intake in favor of a healthier lifestyle, notes Innova Market Insights.

As far as flexitarians are concerned, there have even been moves to develop hybrid products that combine meat properties with vegetables, while some alternatives even “bleed” or sizzle in order to emulate meat, ideas that would dismay many vegans. With such diverse attitudes in the customer base and no “one size fits all” solution, delivering choice is very much the name of the game.

“The number one focus, or certainly the most attention-grabbing part of the meat alternative sector in the US, has been burgers. If we compare that to Europe for example, we see a wider range of alternative formats such as chicken pieces, sausages and ground beef. I think the ‘bleed’ characteristic of meat replacements could be seen by many consumers as part of the ‘reason to believe’ that the alternative tastes good and compares to meat,” says Williams.

In August, the US Food and Drug Administration (FDA) approved soy leghemoglobin as a color additive in uncooked ground beef analog products. This follows meat-alternative company Impossible Foods’ 2018 petition to have the ingredient accepted as a color additive. Soy leghemoglobin imparts a reddish-brown color to meat analogues and is used by Impossible Foods as the “magic ingredient” to impart an optimized beefy flavor in its products.

Spotlight on meat alternatives
The US market for plant-based innovation is heating up with heavyweight food service giants taking notice of the ample opportunities within this space.

Last week, MorningStar Farms, a US division of the Kellogg Company that produces plant-based variations of traditional meat products, announced the latest addition to its plant-based portfolio with the entry of Incogmeato. The new product line includes the company’s first ready-to-cook plant-based burger to be sold on the refrigerated product aisle, and frozen, fully prepared plant-based chicken tenders and nuggets. The products will hit US grocery stores and foodservice in early 2020, tapping into an increasingly lucrative meat-alternative market.

Also this month, Tyson Foods, Inc., through its corporate venture subsidiary, Tyson Ventures, completed an investment in San Francisco-based New Wave Foods, a company focused on producing plant-based shellfish. It also plans to have a shrimp alternative ready for foodservice operators in early 2020. The move is part of Tyson Ventures strategy of identifying and investing in companies with disruptive products and breakthrough technologies.

10 May 2021 --- US plant-tech company, Benson Hill, is going public by merging with a special-purpose acquisition company (SPAC), Star Peak Corp II. The move may see the agri-tech... Read More

10 May 2021 --- Chocolate remains the top snack of the COVID-19 pandemic, with nearly 90 percent of US consumers purchasing some form of chocolate candy within the last three... Read More

07 May 2021 --- This week in industry news, Azelis acquired Vigon International as part of its foray into the US flavors market. Britvic bought Plenish, a UK-based drinks business,... Read More