You are in : All News > Introducing “Incogmeato”: MorningStar Farms expands plant-based range with burger and nuggets 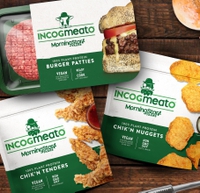 10 Sep 2019 --- MorningStar Farms, a US division of the Kellogg Company that produces plant-based variations of traditional meat products, has announced the latest addition to its plant-based portfolio with the entry of Incogmeato. The new product line includes the company’s first ready-to-cook plant-based burger to be sold on the refrigerated product aisle, and frozen, fully prepared plant-based chicken tenders and nuggets. The products will hit US grocery stores and foodservice in early 2020, tapping into an increasingly lucrative meat-alternative market.

All the products are made with non-GMO soy and will appear next to their traditional meat offerings.

“We know that about three-fourths of Americans are open to plant-based eating, yet only one in four actually purchase a plant-based alternative,” adds Young. “The intent is fully there, but it hasn’t necessarily been followed with action. We know the number one barrier to trying plant-based protein is taste. These consumers are still seeking the amazing taste, texture and sizzling qualities of meat but want a better alternative for themselves and the planet.”

Plant-based offerings given rise
Globally, the space of plant-based innovation heats up with heavyweight food service giants taking notice of the ample opportunities within this space. Innova Market Insights data reports 14 percent of global meat launches in 2018 were meat alternatives, compared to 6 percent in 2013.

This month, Tyson Foods, Inc., through its corporate venture subsidiary, Tyson Ventures, completed an investment in San Francisco-based New Wave Foods, a company focused on producing plant-based shellfish. It also plans to have a shrimp alternative ready for foodservice operators in early 2020. The move is part of Tyson Ventures strategy of identifying and investing in companies with disruptive products and breakthrough technologies.

Also this month, UK plant-based firm, The Meatless Farm Co, continues to expand with a new Brakes listing. This follows a series of successful UK and international retail launches including Sainsbury’s, Morrisons, Co-op and Whole Foods Market and comes amid a plant-based boom. The new listing will ensure The Meatless Farm Co’s range of plant-based mince, burgers and sausages are available for operators nationwide, as demand increases. The company’s products are made from a signature mix of pea, soya and rice protein.

15 Jul 2021 --- Nabati Foods Global has filed new patents for its plant-based egg product, Nabati Plant Eggz. These have been registered in Canada, the US and Australia. The... Read More

13 Jul 2021 --- Potato fruit water is a byproduct of the potato starch industry and a source of new functional proteins. With the “rescued ingredients” trend ripe for... Read More