You are in : All News > Raising the steaks: Plant-based boosts innovation to overcome roadblocks

25 Oct 2022 --- Despite a plant-based blip in the US, with companies like JBS shutting down its alternative meat operation, plant-based companies continue to release products and innovate, eyeing the potential long-term growth of the category.

According to Innova Market Insights, 21% of US consumers increased their consumption of plant-based protein over the past year.

And in line with the market researchers recently released Top Ten Trends for 2023, Plant-Based: Unlocking a New Narrative is a trend evolving into next year.

It highlights how the rapid rise of the plant-based sector has, almost inevitably, hit some roadblocks, necessitating a refocus around consumer demands for high-quality, flavorful products. No longer merely a mimic, green gastronomy will blossom as a standalone sector in 2023, giving brands significant opportunities to diversify and expand.

Taste & texture
Consumers still want to see improvements in taste and texture, but there is a vast appetite for culinary creativity and worldwide flavor profiles.

Earlier this week, Armored Fresh  launched a line of plant-based cheeses in the US while Omni  launched four plant-based dishes – an alternative luncheon meat, potstickers, a crab-style cake, and spring rolls.

Meanwhile, Beyond Meat is bringing its plant-based Beyond Steak to US stores. The alternative beef product packs 21 grams of protein per serving and is low in saturated fat with no added antibiotics or hormones.

Beyond Steak will launch at Kroger, Walmart and some selected Albertsons and Ahold retailer stores in the American country. 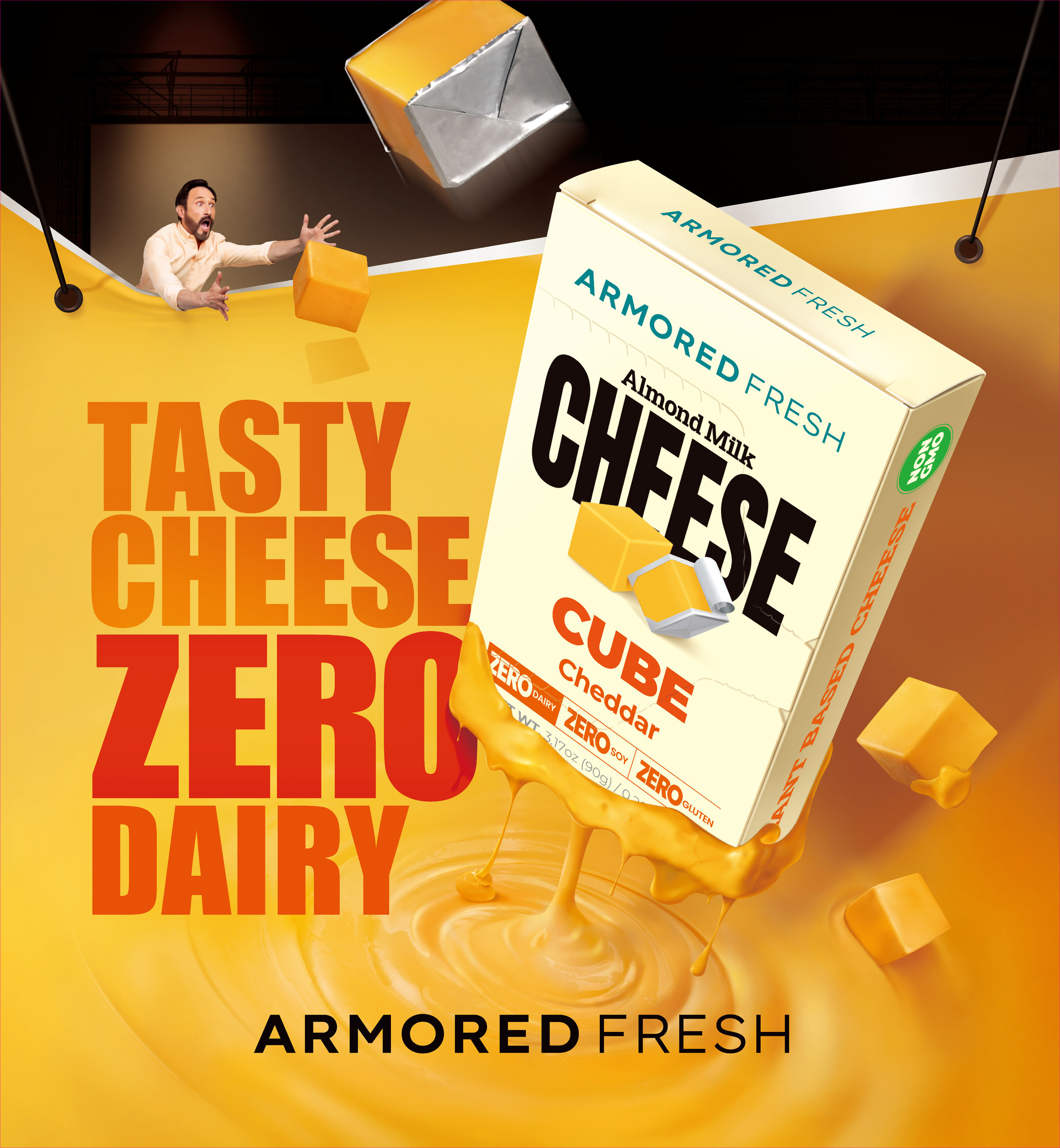 Armored Fresh will debut with cheddar, plain and blueberry cubed cheese. (Credits: Armored Fresh).Beefing up the beef alternatives
Rabobank revealed in June that consumers are paying more for beef now than in the last decades. The bank highlighted this as an opportunity to position low-emission and climate-neutral beef products on shelves worldwide.

According to the US National Chicken Council, beef consumption in the country is at similar levels as in 1960.

Meanwhile, Dutch Mosa Meat revealed last week that it is also working on alternative beef – in its case, cultivated. After demonstrating the beef cultivation process at a pilot scale, Mosa Meat is now ready for the next phase of expansion, housing industrial-size production lines and enabling larger production quantities of beef.

Non-cheesy cheeses
Armored Fresh cheese uses a technique that mimics the process of creating dairy cheese by substituting almost milk and plant-based lactic acid, giving the product a similar texture to regular cheese and a “flagrant flavor,” according to the business.

The company will debut with cheddar, plain and blueberry cubed cheese.

“We understand that the US market for cheese is one of the biggest in the world and there is a need for great tasting plant-based cheese,” says Daniel Yang, sales manager of Armored Fresh.

The company’s luncheon is flagged as an alternative to canned pork with less fat, sodium, and cholesterol and free of preservatives and nitrates. The business will also launch a pork-style Asian appetizer potsticker using Omni’s Ground – a plant-based meat alternative made with non-GMO soy, peas, rice and shiitake mushrooms.

Furthermore, the company will also bring its crab-style cake made with soy and rice protein. 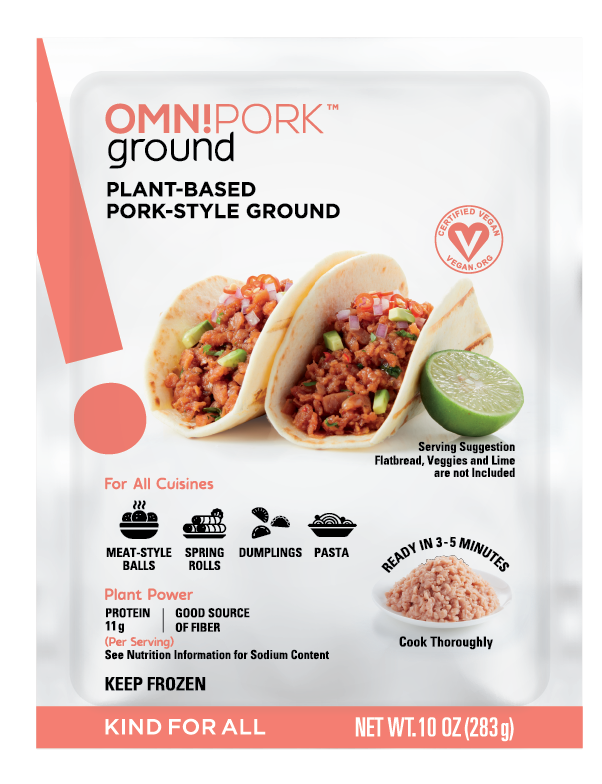 Omni uses a plant-based meat alternative made with non-GMO soy, peas, rice and shiitake mushrooms. (Credits: Omni).
Beyond Meat is struggling to navigate through the general stock market downturn; the company stock value is down 80% this year-to-date and 87% from one year ago. The business is valued at just under US$800 million, its lowest valuation since its 2019 initial public offering.

The business ended Q2 2022 with US$455 million in cash, compared to US$733 million at the end of last year. This has forced the company to cut back its workforce to stabilize its finances.

The plant-based giant is cutting 200 jobs, 19% of its global workforce, this month after cutting 4% of its workforce just two months ago in August.

“Beyond Meat is implementing measures to drive more sustainable growth, emphasizing the achievement of cash flow positive operations within the second half of 2023. While we believe the current headwinds facing our business and category – including record inflation – are transient, our mission, brand, and long-term opportunity endure,” says President and CEO of the company Ethan Brown.

“To manage through the current environment and realize the opportunity ahead, we are significantly reducing expenses and sharpening our focus on a set of key growth priorities,” he continues.

Prospects keep deteriorating
The company now expects its revenue to decrease 9% to 14% this year, lowering expectations after the previous lowering of expectations this August, where they cut growth prospects from 21% to 33% to between 1% to 12%.

“While Beyond Meat continues to review the drivers behind the recent performance, the company believes it has been negatively impacted by ongoing softness in the plant-based meat category overall, especially in the refrigerated subsegment, and by the impact of increased competition,” explains the business.

“Inflation is believed to be an underlying factor exerting pressure on the category as consumers trade down into cheaper forms of protein, including animal meat. Additionally, the company believes it was negatively impacted by decisions made by distributors and customers, such as changes in inventory levels and postponed or canceled promotions.”

Erin Borror of the US Meat Exports Association told FoodIngredientsFirst that consumers have strongly demanded regular meat this year instead of plant-based.

“Plant-based has been a quick fad, the repeat purchase wasn’t there. Plant-based makes up a tiny fraction of sales in the US market.”