You are in : All News > Inflation on the horizon for US meat, exports poised to meet challenges after record sales

Inflation on the horizon for US meat, exports poised to meet challenges after record sales

19 Oct 2022 --- After an excellent year for meat exports from North and South America, industry might be facing a delayed reality that has already disrupted other commodities – inflation. Some meat exporters have seen record sales so far this year, but now challenges are starting to mount up and strains on the meat market are expected to hit soon.

“Inflation is a challenge for everyone. We’ve been watching inflation since last November and it had not impacted US beef and pork demand. But starting around this summer, it started to have a more significant impact on consumer spending. As consumers worldwide see their disposable income reduced, there is some expectation that it will start to impact their meat demand.” Erin Borror, VP economic analysis, US Meat Export Federation, tells FoodIngredientsFirst on the SIAL 2022 trade show floor.

“We’re not really seeing this [inflation] play out in the data yet, but we know it is there,” highlights Borror.

Exports have already peaked for meat exporters in Brazil, which hit a peak in August, with prospects for the rest of the year and 2023 not looking too promising.

Meaty 2022, plant-based star fades
Borror flags how US beef exports have topped one billion US dollars each month this year, except February, predicting that the export tally at the end of 2022 will reach US$12 billion for US exporters.

“For meat, for beef and pork it has been an incredible year. It was basically at record levels last year, and has sustained strong growth through the first half of this year as consumers have demanded meat products, whether they eat at home or away,” she underscores.

“Consumers have chosen beef and pork even at higher prices,” Borror notes.

Meanwhile, it has been a complex year for plant-based in the US as JBS shut down its alternative meat operation and early adopters like Beyond Meat are taking a tumble in the stock market, with the company losing 79% of its value year-to-date and being 87% from one year ago – the company has lost its US$1 billion valuation mark for the first time since its initial public offering in 2019.

“Plant-based has been a quick fad, the repeat purchase wasn’t there. Plant-based makes up a tiny fraction of sales in the US market,” Borror explains.

“We hear a little bit more about plant-based in some of the international markets, but it just hasn’t had a material impact so far,” she continues. 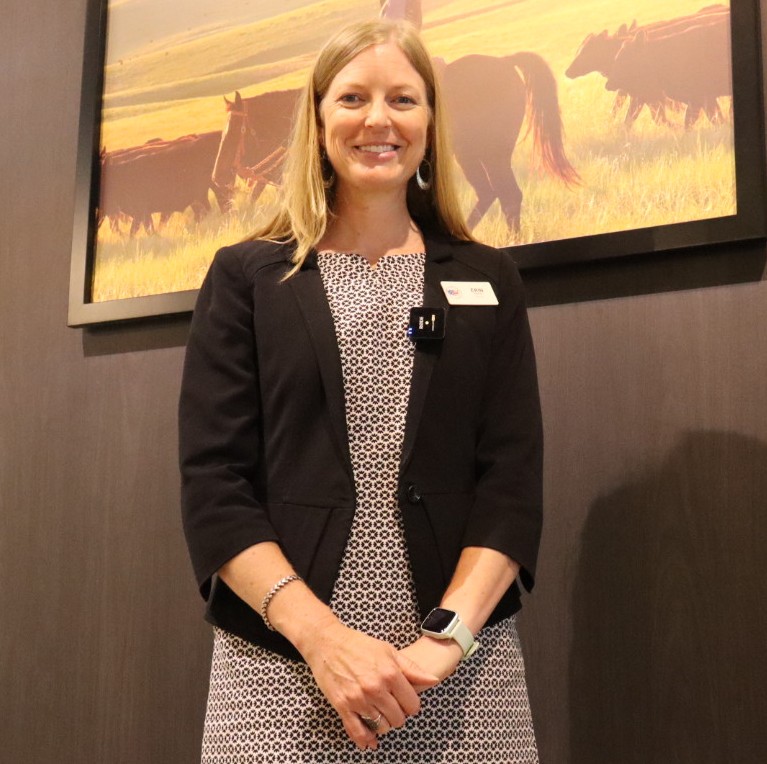 “We’re not really seeing this [inflation] play out in the data yet, but we know it is there,” highlights Erin Borror.Currency chaos and pork exports
Borror explains how the dollar has hit multi-decade highs against some major currencies, leading to a 20-year high against the euro and to its highest level since 1998 when compared to the Japanese Yen – Japan being the largest importer of US beef.

“The strong dollar has been a headwind,” she highlights.

“You add on high shipping costs to the strong dollar, and that’s where it becomes a challenge for our exporters.”

However, some currencies have remained steady against the dollar, such as the Mexican peso, which has helped US exports – as Mexico is the largest importer of US pork.

US exporters are now focused, according to Borror, to continue marketing high-quality US meat, as she admits it is not a cheap product.

“We expect this year to see Chinese imports start to rebound a little bit toward the end of the year,” she notes.

The intense price action has forced the national government to step in and try to rein in prices.

Brazil stocks full to the brimThe Ukraine War has a critical role in driving up international meat prices.
Alisson Leigus, Brazil sales manager at Gerber Agri International, talks to FoodIngredientsFirst about South American meat market dynamics. The region, and Brazil in particular, is oversupplied after record months of meat shipments and domestic sales in May, June, July and August.

“Prices for chicken breasts and legs have already gone down 50%, in Brazil, since the start of the year,” highlights Leigus.

Leigus flags that the Ukraine War has a critical role in international meat prices, especially for poultry. He underscores how Poland has increased production and Ukraine is coming back in production.

“If the war ended and Ukraine came back in full, Europe would not be able to handle the supply. Ukraine is a big player,” Leigus highlights, stating that meat prices could collapse if the war were to end suddenly.

Augusto Bruno, pricing and sales executive at Blue Water Shipping, adds that supply chain problems securing containers are still troubling exporters in South America. However, he notes that freight rates for ships are in a downwards cycle.