You are in : All News > Protecting ocean biodiversity: Nestlé launches plant-based tuna alternative 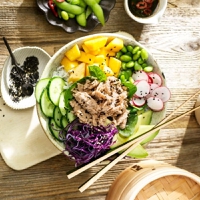 Vuna will initially be launched under the Garden Gourmet brand in Switzerland, before potential roll-out in other markets. It is made from just six ingredients – water, pea protein, wheat gluten, rapeseed oil, salt and natural flavoring.

“They are combined using our proprietary processes that we use for other plant-based alternatives. The pea protein we are using is of high quality and provides a balanced amino acid profile including all essential amino acids. The rapeseed oil is known for its high content of omega 3 fatty acids,” explains a Nestlé spokesperson.

“We were able to leverage our proprietary technology for plant-based meat alternatives to develop and launch the product in only nine months. Our scientists, chefs and food technologists worked together to get the right ingredients, taste, flaky texture and appearance. In general, Nestlé has worked to increase speed in innovation, for example, rapid prototyping. To increase speed-to-market for the launch, the product is currently produced at our R&D center in Singen, Germany.”

The plant-based tuna alternative can be used in a wide range of dishes such as salads, sandwiches and pizzas. It’s pegged as being high in protein, while also being mercury-free. It is rich in nutritious pea protein, one of the most environmentally friendly sources of plant-based protein and contains all the essential amino acids. It’s also free from artificial colorings or preservatives.

The Vuna launch will feature both the chilled product, which is available in a glass jar, as well as plant-based tuna sandwiches in select stores.

Big food brands are vying for their slice of the plant-based pie
The spokesperson explains that several factors continue to lead people to shift to more plant-based diets. These include health and environmental consideration, or concerns about animal welfare.

“We are seeing interest in a wide range of plant-based food and beverages, including seafood. With regard to seafood, many people are also expressing concern over overfishing and loss of biodiversity in our oceans.”

The Vuna launch will feature both the chilled product, which is available in a glass jar, as well as plant-based tuna sandwiches in select stores.

“Much of the development for this product took place in Switzerland at Nestlé Research. It is another example of the innovation strength of Nestlé in Switzerland and the exceptional capabilities and expertise we have in this country in the area of food and nutrition,” notes the spokesperson. “Furthermore, Swiss consumers are very receptive to innovations and following the successful launches of recent Garden Gourmet products in Switzerland, we have decided to launch this product here first.”

“We have seen a very positive reaction to our recent launches, demand is strong and we expect it to continue to grow as more people look for options that are good for them and for the planet,” the spokesperson adds.

In addition to plant-based seafood, Nestlé is focused on expanding its plant-based portfolio in other categories. “With regard to milk alternatives for example, exciting launches include our first fully pea-based milk alternative under the Nesfit brand in Brazil and Starbucks non-dairy creamers in the US,” the spokesperson continues.

Many F&B mainstays are eying up the plant-based space, with a four-year investor engagement with 25 giant food retailers and manufacturers finding that two in five global food giants with combined annual revenues of US$459 billion now have dedicated teams to develop and sell plant-based alternatives to meat and dairy. Tesco and Unilever were recently ranked top, closely followed by Nestlé.

Nestlé growing plant-based portfolio
Nestlé’s vegan launch comes at a time of heightened plant-based popularity and is the latest in a series of plant-based offerings since the company strategically shifted focus toward attractive high-growth categories. This included the divestment of its Herta charcuterie business in February 2018 when it initially made moves to ramp up its meat alternatives portfolio.

Earlier this year, Nestlé launched its soy-based Garden Gourmet Incredible Sausage in Europe. The vegan sausage is available in Bratwurst and Chorizo styles and, according to the company, “delivers on both flavor and texture.” Shortly afterward, the company entered the US market with the pea protein-based Sweet Earth Sausage.

The sausages followed Nestlé’s big move into the meat-free market last April with the launch of its 100 percent plant-based burgers (with natural protein from soy and wheat) in Europe and the US. Nestlé then also rolled out a cook-from-raw plant-based burger in the US under the Sweet Earth brand, customized for the American consumer.

CEO of the Sweet Earth brand, Kelly Swette, told FoodIngredientsFirst at the time how the new “Awesome Burger” would disrupt the eco-burger market directly competing with Impossible Foods and Beyond Meat offerings.

Ingredient supplies
As meat and fish substitutes are a fast-growing industry, demand for the crops and ingredients that produce them is rising.

Nestlé has also teamed up with small Canadian plant-based food ingredient makers Burcon and Merit Functional Foods to source raw materials, and has already joined forces with Dutch food and biochemicals company Corbion for the development of microalgae-based ingredients for plant-based products. Meanwhile, it’s also planning to build a US$100 million plant-based center in China.

The plant-based products are developed by Nestlé Research in Switzerland and the dedicated R&D Centers for food in Germany and the US. To increase speed-to-market, products are rapidly prototyped and tested in selected retail outlets, and first commercial batches are produced in Nestlé R&D facilities.

Popularity of plant-based
The rapid onset of climate change was already pushing food security and sustainability to the fore and now the COVID-19 pandemic increases their significance. Dietary habits geared toward health, immunity-boosting and wellness are top of mind, while planetary and ocean health are key sustainability issues that are important to consumers.

The Plant-Based Revolution – the #2 trend from Innova Market Insights for 2020 – goes from strength to strength, influencing NPD across the board.

The plant-based trend is evolving with vegan and vegetarian food being developed with an extra level of sophistication. Meanwhile, foodservice is tapping into the trend, with more restaurant chains serving all-vegan menus as part of their planet-friendly and green-orientated restaurant offerings.