You are in : All News > “Groundbreaking” bee vectoring technology gets US EPA green light 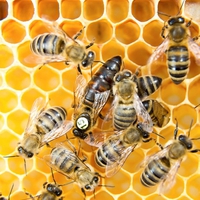 09 Sep 2019 --- Toronto-based start-up Bee Vectoring Technologies International (BVT), which uses bees to deliver fungicide, has been given regulatory approval for its Clonostachys rosea CR-7 (BVT-CR7) for use on commercial crops. Hailed as a “groundbreaking shift in how plant care products can be applied,” the US Environmental Protection Agency (EPA) greenlight means BVT is positioned to officially launch its proprietary BVT-CR7 solution, Vectorite, starting with this year’s autumn and winter blueberry and strawberry season in the US. The EPA-approved inoculate will significantly cut operational costs and harmful chemical use, while reducing the risk of crop diseases, notes the company.

“This is a critical milestone for BVT in terms of the commencement of scalable commercialization and revenue,” says Ashish Malik, CEO of BVT. “By using commercially-reared bees to deliver biological products, growers can protect crops, increase crop yields and enhance their sustainable growing practices. This is through the reduction of the use of chemicals and other costly and increasingly scarce resources including water, fuel and labor.” 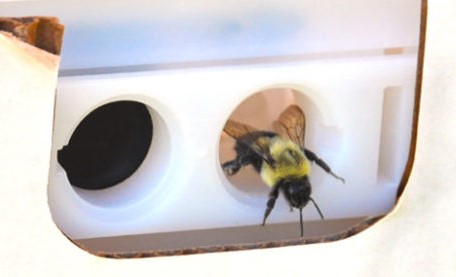 Click to EnlargeBRT-CR7 is applied to crops via bee vectoring.BRT-CR7 is a specific strain of fungi from the species Clonostachys rosea, which is known to be an endophyte – an organism that lives within a plant for some part of its life cycle without causing disease. The fungus also blocks pathogens from rapid colonization of plants, enabling the stimulation of growth, as well as blocking crop diseases such as Botrytis and Sclerotinia. When used as a foundational program in high-value crops, BRT-CR7 is effective in controlling key diseases that can cause enormous commercial losses in crops, highlights BVT.

BVT-CR7 is the first registered active ingredient for the company and the first active ingredient approved by the EPA for delivery through “bee vectoring,” a method of using commercially reared bees to provide highly targeted pest and disease management solutions. The registration permits BVT to make positive crop protection claims when selling Vectorite with BVT-CR7.

Proprietary crop protection
BVT is currently pursuing regulatory approval of CR-7 from other key countries and, because the EPA serves as an affirmative model for regulatory agencies outside the US, the company expects these review processes to be expedited. The company’s key technologies include:

The BVT Dispenser System is an apparatus for the treatment of plants with Vectorite that includes an inoculum dispenser and a tray. The BVT inoculum dispenser system is incorporated into the lid of commercial bumblebee hives. In the dispenser is a removable tray that contains, in powder form, the inoculant crop control and a mixture of products (Vectorite) that allows the inoculant to attach to a bee’s hairy legs and body as it walks onto the delivery tray on its way out of the hive.

In addition to elevating the disease resistance of crops, BVT notes the following benefits of BVT-CR7: 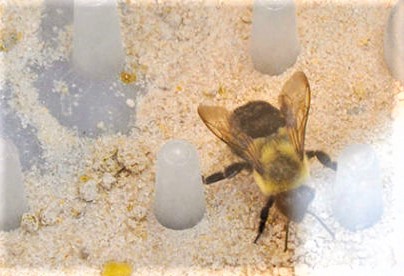 Click to Enlarge The inoculant attaches to a bee’s hairy legs and body.

“According to industry statistics, to establish the high levels of safety and efficacy required to bring a new crop protection product to market costs, on average, more than US$280 million and 11 years of internal research and development, university crop trials and grower demos,” says Michael Collinson, Chairman of the Board of Directors for BVT. “The BVT team has succeeded in developing a novel and effective alternative solution to traditional chemical pesticides and has done so at a fraction of the average industry cost.”

BVT is currently has three families of patents filed in 40 countries for its bee vectoring technology, including patent applications pending under review by the United States Patent and Trademark Office.

Approval of the crop-safe BVT-CR7 is in alignment with a heightened industry focus on the curtailment of chemical use on crops. This week, US beekeepers are suing the Trump administration in light of its decision to allow the use of sulfoxaflor, an insecticide linked to the collapse of entire honey bee colonies. In July, the EPA lifted restrictions on the insecticide and approved a number of its claims.

Crop preservation through agri-tech
Across industry, civil society organizations have issued joint statements calling for chemical use in crops to be phased out, biodiversity to be restored and farmers to be supported during a food and farming system transformation. As such, the global demand for efficacious, eco-friendly crop preservation strategies is increasingly prominent.

Reflecting the critical impact of chemicals used in agriculture, a widely used agricultural neonicotinoid (pesticide) called clothianidin was found to cause honey bees to become more susceptible to deadly varroa mites, according to a study published in May. The dramatic decline in insect pollinators is forcing the agricultural sector to re-examine its own practices, say industry executives.

Last month, researchers at the John Innes Centre announced developments in genetically engineering rice that is resistant to a globally devastating fungus. The discovery, published in the Journal of Biological Chemistry, provides new insights into how rice’s immune receptors recognize and bind to fungal proteins. With a grip on how the grain fights illness, researchers hope to arm a variety of rice with the receptors it needs to resist rice blast disease. The fungus causes losses of up to a third of the global rice harvest – enough to feed 60 million people each year, reports the institute.

In May, Dr. Konstantin Blyuss, a University of Sussex mathematician, developed a variety of wheat that precisely targets specific microscopic worms called nematodes, without harming any other insects, birds or mammals. The procedure is a chemical-free process of bioengineering that involves exposing the wheat plant to natural biostimulants in order to stimulate the desired characteristic. The emergent practice is proving to be a desirable alternative to genetically modified crops as it is easier to implement and more cost-effective, benefitting large-scale agricultural productivity.

UK takes a chunk out of food waste problem with 7 percent reduction per capita, WRAP reveals

28 Jan 2020 --- Government-backed sustainability organization WRAP has revealed that the UK has made significant progress in reducing its food waste with total food waste levels... Read More

28 Jan 2020 --- As Brexit day is just around the corner and trade negotiations between the UK and other nations begin, organizations from across the UK food and drink supply chain... Read More