You are in : All News > Fished from the garden: Gathered Foods raises US$32m in funding plant-based seafood 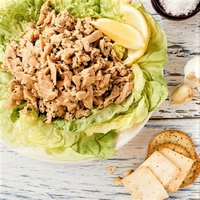 16 Jan 2020 --- Advancements in food tech continue to bridge the gap between imitation meats and animal-based products. Valued at US$4.5 billion, Gathered Foods, plant-based seafood producer of the Good Catch brand, recently closed a Series B funding round, which includes two key strategic industry investors, Greenleaf Foods and 301 INC, the venture arm of General Mills. The net proceeds from the investment, totaling over US$32 million, will be used for significant expansion in distribution across North America, Europe and into Asia, alongside the opening of its state-of-the-art manufacturing facility and new product and food service channel launches this year.

“The Plant-Based Revolution” is pegged by Innova Market Research as the second most significant trend expected to influence NPD this year. Within the vegan meat space, the market researcher’s 2018 consumer survey showed one in five US consumers “have eaten less meat across the past year.” Meat substitutes accounted for 14 percent of global meat launches in the first nine months of 2018, up from 6 percent in 2013.

Gathered Foods outlines that the US plant-based foods retail market has grown five times faster than the nation’s total retail food sales over the past year. “Consumer demand of trailblazing plant-based alternatives is nearly insatiable, and this trend is led by taste and availability. This next phase for Good Catch is laser-focused on meeting consumer desires with culinary applications across all channels,” says Chris Kerr, CEO and Co-Founder of Gathered Foods.

Behind the success of Good Catch are founding chef partners and brothers, Chad and Derek Sarno. They have worked to help create the company’s proprietary six-legume blend (peas, chickpeas, lentils, soy, fava beans and navy beans), utilized as the base of the flagship Good Catch products. The added umami flavor from seaweed and algae extracts creates a real seafood flavor, the company notes.

On the market, seaweed has been gaining traction as a natural salt replacement and versatile flavor enhancer. In addition, food manufacturers and brands are seeking ways to put more seaweed on-pack, as consumers are increasingly attracted to the plant’s health halo.

Good Catch plant-based tuna product line.The better catch
All Good Catch products are marketed as free of dairy, GMOs, mercury, toxins, microplastics, microfibers and are safe and enjoyable for those with shellfish allergies. These products exhibit the same texture, flavor, and nutritional value as conventional seafood, without harming the environment.

Good Catch believes that the only truly sustainable seafood is one that allows fish to remain in the ocean, undisturbed. Seafood is consumed globally and found within myriad culinary applications. According to United Nation (UN) reports, nearly 90 percent of the world’s marine fish stocks are now fully exploited, overexploited or depleted, with fisheries subsidies playing an integral part. Moreover, as reported on FoodIngredientsFirst, overfishing is prevalent in all European waters despite the deadline agreed by all member states. From an environmental standpoint, Good Catch is hopeful that by creating clean seafood alternatives, it will contribute to the global sustainability movement.

“Hot on the heels of widespread adoption of plant-based meat and increasing consumer concern about the environmental impacts of food production, the market is ripe for Good Catch’s next-generation plant-based seafood,” says Caroline Bushnell from the Good Food Institute, a US-based non-profit organization active in promoting the consumption of meat alternatives.

As the appetite for plant-based seafood continues to grow, an overarching goal is to broaden the availability of Good Catch products on the market. Good Catch products are now available in over 4,500 retail outlets across the US, and will be launching in the UK in the coming weeks, according to the company.

“Good Catch is pioneering a new, promising sector of the fast-growing, plant-based protein category and we're thrilled to support their continued growth and progress as they deliver consumers great-tasting, plant-based seafood products that support their brand mission – and ours, as well,” says Dan Curtin, President and CEO of Greenleaf Foods, SPC.

“This round of investment emphasizes the food industry’s recognition of our strategy, our reception by consumers, and anticipation for more innovation to come,” concludes Kerr.

Fished from the garden, harvested from a petri dish
Plant-based foods are trending as consumers are increasingly viewing these novel products as the logical next step to eliminate the negative impacts of intensive fishing.

Novish, a member of Foodvalley, specializes in 100 percent plant-based fish substitutes. According to the company, natural aromas inspired by seaweed and algae offer a delicious flavor. Novish products are 100 percent vegan, soy-free and contain no artificial additives including flavor enhancers, colorings and preservatives. The company is set to begin distribution of its plant-based fish alternatives in Europe next month.

Within the clean meat movement, real seafood is now being cultivated in laboratories. In this space, Singapore-based Shiok Meats developed a pioneering technology that grows shrimp meat in a laboratory. Earlier last year, the company closed its seed round of funding at US$4.6 million. Its cell-based agricultural infrastructure is gearing up for large-scale production, which is expected in the next three to five years.

The clean meat space has attracted mass investment recently and headline-grabbing technologies show no sign of slowing down. From growing meat in space and from volcanic microbes, to cultivated shrimp biomass and the creation of meat by harnessing the air’s natural elements – pioneering technologies are breaching new realms of possibility.

IFF aims to take ground meat burgers to the next level with its latest ingredient, a plant-based protein based on soy called SUPRO TEX, which is poised to accelerate... Read More

Mosa Meat is launching in the Asian market through Singapore, while partnering with local manufacturing organization Esco Aster. The company plans to bring its cultured... Read More