You are in : All News > Future of food: Innovation needed to make transition to clean meat a reality, say experts 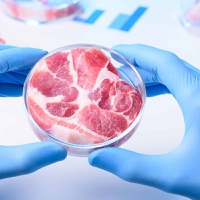 18 Nov 2019 --- From geophysicists to stem cell scientists, the alternative protein space attracts bright scientific minds as the debate heats up around what a sustainable, future food system will look like. Central to the discussion is the role of the meat industry – general consensus dictates that a mammoth reduction or elimination of meat intake is required to stem further damaging climate change. Ahead of Food Matters Live, commencing tomorrow in London, FoodIngredientsFirst takes a look at two pioneering companies presenting at the summit; Singapore-based Shiok Meats and Future Food.

Singapore-based Shiok Meats has developed a pioneering technology that grows “clean” shrimp meat. Co-founded by Sandhya Sriram, the company has a notable range of backers, including the CEO of Monde Nissin, which is the owner of Quorn. Earlier this year, Shiok Meats closed its seed round of funding at US$4.6 million. The company’s cell-based agricultural infrastructure is gearing up for large-scale production, which is expected in the next three to five years.

Future Food was founded by Kurt Schmidinger in 2004, before narratives of alternative proteins, clean meat or plant-based were mainstreamed. The company works with professional organizations and scientists to present new ideas and publicize the mission of futuristic food innovations.

Both organizations aim to deliver clean meat based on cellular agriculture. Why? Both Sriram and Schmidinger cite the importance of the Earth’s health, alongside that of humans.The alternative protein space is gaining major traction in the industry and indicates an appetite for non-meat products.

“Our current industrial farming of 75 billion animals per year globally is a factor for our climate crisis, rainforest destruction, water consumption, water pollution, soil erosion, loss of species and land demand. It involves immense cruelty to sentient beings, it is dependent on antibiotics and causes dangerous antibiotic resistance. It is also a potential birthplace of pandemics as the products aggravate lifestyle diseases. This whole inefficient system also exacerbates the world hunger problem,” explains Schmidinger.

“Each of these problems alone is a strong reason to look for alternative proteins, but the sum of the problems is an overwhelming reason to change something.”

Indeed, the clean meat space has attracted mass investment in recently, and headline-grabbing technologies show no sign of slowing down, in fact they are gathering pace. From growing meat in space, as Aleph Farms made possible in October, to creating meat by harnessing the air’s natural elements, pioneering technologies are achieving new milestones.

Challenges facing grand scale-up
However, the clean meat movement does face a number of obstacles, not least cost markups and consumer acceptance.

Speaking to FoodIngredientsFirst at Anuga 2019 in Cologne, Germany, Didier Toubia, Co-Founder & CEO Aleph Farms, said he envisions a future where cultivated meat will be produced in biofarms. These will be automated, use scarce resources and, therefore, the costs will go down. Eventually, it could be cheaper to produce than conventional meat.

“Food choices are a very conservative thing – in other areas of life people tend to be much more flexible. Internet, mobile phones and smartphones took just one, two or three years for acceptance. Such short time horizons would be great in food changes, too, but I assume that this will take markedly longer.”

“To make the introduction of alternative proteins possible in the first place, criteria like taste, texture or price must be attractive to consumers. Shelf life and health issues should not pose a big challenge for alternative proteins, but marketing and advertising and dealing with opposition from existing industries and overcoming consumer habits and traditions will be a huge challenge,” he says.   Both Sriram and Schmidinger cite the importance of the Earth’s health, alongside that of humans.

Indeed, the alternative meat space has hit back at a supposed “smear campaign.” A series of advertisements described plant-based products as “ultra-processed” were run by non-profit organization The Center for Consumer Freedom (CFF). Impossible Foods hit back, saying that the advertisements were part of a “smear campaign” against disruptive companies.

As the saying goes, taste is king and therefore, will also be key to winning over the average consumer, Schmidinger adds. “In principle, everything we need to replace animal-based proteins with more sustainable alternatives is available. But to make the transition more realistic on a grand scale, we will need innovation to make the change as easy as possible for the consumers. If a consumer is used, or addicted, to the taste of burgers, schnitzels or steaks, we have to give them such products, just produced in a much more sustainable way. Otherwise, we will not succeed.”

Sriram also notes the importance of aligning this new industry with existing ones. She explains that Shiok Meats is a “hybrid”; “We will manufacture the cell-based seafood products, but we want to empower and enable other shrimp companies and farmers with our technology by licensing it out so that they can grow shrimp meat the way we do. This way, we are not putting anyone out of a livelihood.”

A positive trajectory predicted for clean meat
Despite challenges for the novel industry, growth is clear. In September, five innovative food companies looking to bring cell-based (lab-grown) meat, poultry and seafood to restaurants and retail shelves in the US formed the Alliance for Meat, Poultry & Seafood Innovation (AMPS Innovation).

While some predictions paint an increasingly bleak future for the conventional meat industry. RaboResearch Food & Agribusiness, a research arm of Rabobank, asserted that the global animal protein sector “faces an uncertain world, which also offers opportunities for some.”

The alternative protein space is gaining major traction in the industry and could indicate an appetite for non-meat products, which could be a good sign for the clean meat movement. The space is no longer niche, and it encompasses a much broader base of flexitarians as the quality improves to replicate real meat more closely.

According to data from Innova Market Insights, meat substitutes accounted for 11 percent of new meat product launches (meat, poultry and meat substitutes) reported in Europe in 2018 (January  to September), up from 9 percent in 2013. The global picture shows stronger growth still, with 14 percent of meat launches in the first nine months of 2018 being meat alternatives. This compares with 6 percent in 2013.