You are in : All News > Could seaweed flakes replace salt? An alternative flavor enhancer tipped to make waves 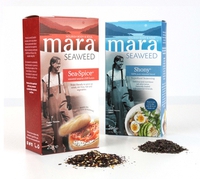 08 Nov 2019 --- Tesco has teamed up with a Scottish food producer to stock “super healthy” seaweed flakes tipped as a natural salt replacement and versatile flavor enhancer. The retailer has just started selling sachets of three of Mara’s ground seaweed products at stores across the UK for health-conscious consumers looking to cut down on their salt intake and boost their food with an umami kick.

Seaweed is, on average, 85 percent lower in sodium than salt. Excess sodium can raise blood pressure which in turn can lead to heart disease and strokes, notes Tesco. It is also rich in other ‘salty’ minerals such as iodine, potassium, magnesium, calcium, iron, and zinc.

Mara Seaweed was originally set up by two friends, both passionate about popularizing the superfood as a healthy alternative.

“Using seaweed as a seasoning is not only a great way to cut down on your sodium intake but one that can add a real ‘wow’ factor when added to other foods,” says Tesco Herbs and Spices buyer Angus McSporran. “It is already hugely popular in the Far East where it has been part of the national diet as a treat as well as a wonderful tasting food enhancer.

“We think it will appeal to food lovers seeking a new taste thrill. It has a subtle salty taste and which has been compared to umami – the fifth basic taste we can sense after salt, sweet, sour and bitter,” he adds.

UK government recommendations state that no more than six grams of salt should be consumed per day but currently daily consumption for UK adults is around eight grams.

“The Tesco deal is not only a game-changer for us but for the whole growing seaweed industry,” says Houston. “It will mean seaweed as a healthy and tasty alternative to salt being introduced to more shoppers than ever before.”

“Our goal has always been to be a household name – Mara Seaweed on your table alongside Heinz Ketchup, Marmite…maybe one day soon people will be shaking our products on their chips instead of salt.”

The seaweed is harvested sustainably around the Fife shoreline, under license from the Crown Estate, and roughly two large handfuls are eventually ground down to make one 20g sachet. Mara also partners with other seaweed producers throughout the North Atlantic to ensure a sustainable supply. After being harvested, water is extracted from the seaweed and it is then milled into flakes so it is easy to use.

Mara’s three seaweed flake products are:
Shony, a 100 percent pure seaweed blend that can be used as a seasoning as it has a mix of salty and sweet flavors
Sea-Spice – A Scottish/Asian blend of seaweed, sesame seeds and chilli flakes with a salty, spicy umami kick
Mara Variety Pack – 10x2g single-use sachets featuring five each of Shony and Sea-Spice.

High amounts of salt in diets can significantly increase corticosterone – the equivalent of corticosteroid, the so-called “stress hormone” in humans... Read More

Vitamin-rich sugar kelp poised to make waves in US market

Researchers at Uconn extension, College of Agriculture, Health and Natural Resources, are increasing the accessibility of the superfood seaweed. The team is looking to... Read More

After developing electrified salt-inducing chopsticks earlier this year, Kirin Holdings and the Miyashita Laboratory at Meiji University have brought their salt... Read More