You are in : All News > Cosucra Targets Doubling Turnover in 5 Years as New Pea Protein Capacity Comes on Stream

19 Jun 2015 --- Pea protein and inulin supplier Cosucra has set itself ambitious growth targets to effectively double turnover from €80 million today to €150 million in 2020, as the company looks to ride the protein wave with its pea protein isolate products (Pisane). Cosucra announced a €30 million investment in the construction of a second production unit at its Warcoing site (Belgium) 18 months ago. The plant has been operational since May 2015 and was officially inaugurated yesterday.

Details of how much additional capacity for pea protein can be achieved as a result of the expansion are not being disclosed, nor are specifics about how Cosucra, which has been a family run company since its beginning in 1852, can expect to achieve these growth targets. However Jacques Crahay, the company’s fifth generation CEO, did stress to FoodIngredientsFirst that growth will all be organic and that acquisitions will be ruled out. He noted that increased partnership will be key. “Strategy is key to achieving this, but moreover the key will be to follow our customers as closely as possible and be sure that they understand their needs and be able to develop concepts together. Most of the time we see that the properties of our products can be most enhanced when done together with them,” he pointed out. A video interview with Crahay can be seen here. 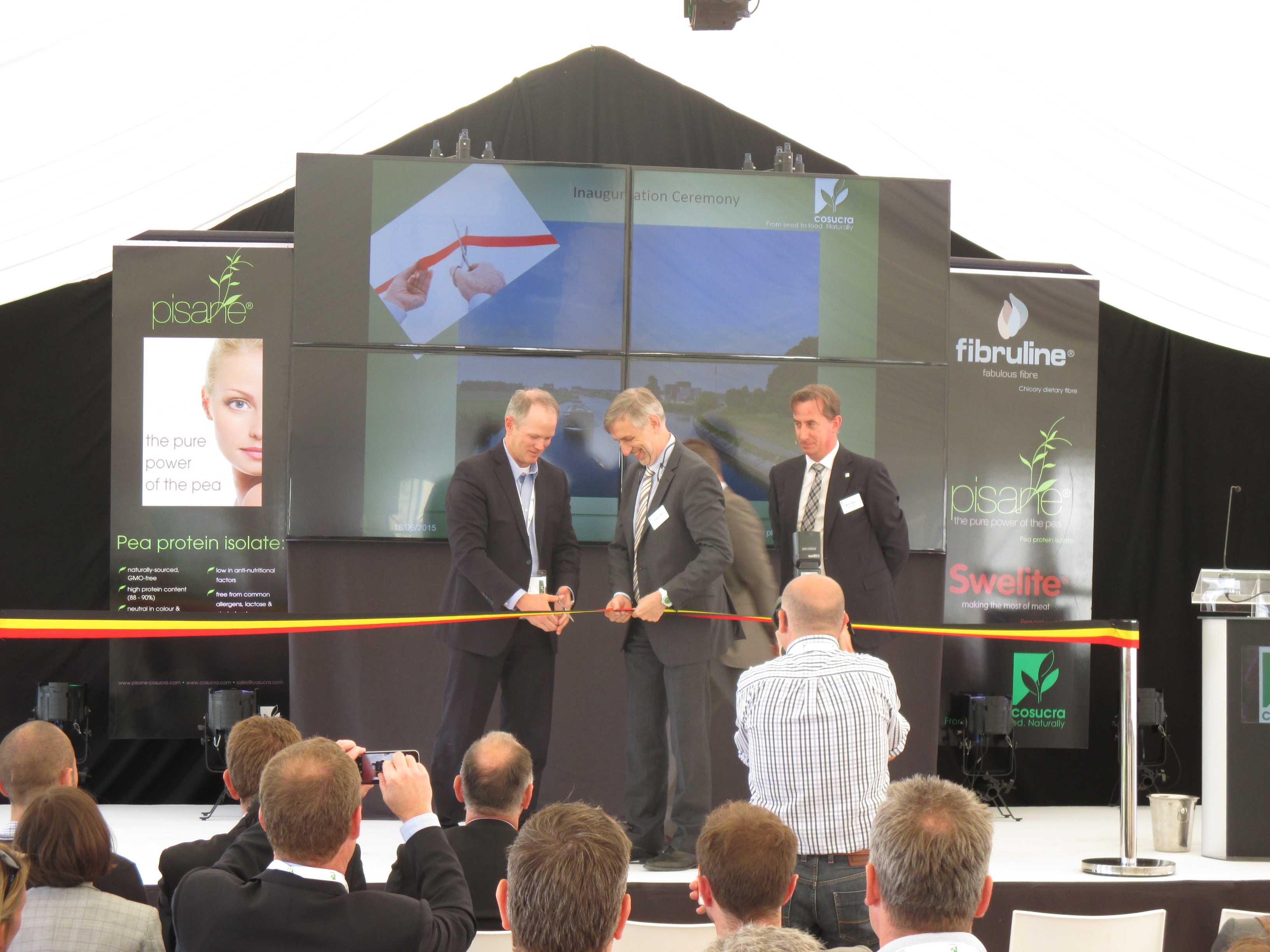 The investment, which is highly significant for a medium-sized company, came as a direct result of demand for pea protein, with the market embracing the ingredient recently. Innova Market Insights has reported an almost quadrupling in new products featuring pea protein from 2010-2014 (+361% from a 2010 base). “For the last 5 years we have developed a lot of concepts to use pea protein and finally we achieved success, especially in the US market, because there was a real demand for new vegetable proteins. And we were in such demand that we had to hurry up this investment. We decided in September 2013 and finally it was in operation of March this year,” he noted.

The whole site is dedicated to the production of pea ingredients, where the entire production process is optimized to offer an extremely pure ingredient. Based on state-of-the-art building methods, the site was designed to minimize the risk of microbacterial growth. This new production line benefits from unmatched supply facilities due to its proximity to a major waterway (the Scheldt River) and the whole increase in supply is therefore supported by river logistics.

The Cosucra plant is located near the main growing areas and the short distance between pea growers and the processing plant helps increase the production volumes of finished products. The new production line is claimed to meet the most demanding requirements for energy savings and the rational use of resources.

Currently some 60% of Cosucra’s turnover is generated in Europe (8% in its home market of Belgium), with 20% in the US and 13% in Asia. But most new growth is likely to be generated outside of Europe. “The US market is one of the most important, but Europe is also growing. As we are making a lot of effort for other product lines for our company in Asia, we see that there is also strong interest there for pea protein, although dissimilar to what we have in the US. Pea is not a common taste in Asia,” Crahay commented. The company has also revealed longer term growth ambitions in Latin America, which were announced at the inauguration.

Commercial Director Michel Dewael also noted the rising global interest in potential for protein products. “A general trend that we have noticed, was that in the past America and Europe were the leaders in asking for healthy foods. We have seen that in the past 4-5 years, Asia was asking for this also. Now we see the same trends happening in South America, so we believe that now is the right time to start investing commercial activities and have the same kind of philosophy in bringing healthy foods to consumers.”

“We expect a very large demand for pea protein in the future, as all the people are looking for plant protein to be able to fulfill the needs of humans. We are specifically focusing on specific demands such as sports, senior people, those who have issues with allergens and GMO, so we truly believe that Pisane is the perfect product to fulfill the requests of the consumer,” he added.

For Dewael, the biggest opportunities remain in all kinds of consumer goods that solve a problem like allergen, clean label and natural. “We have to note that the general companies are also looking to expand their product ranges, so the definition of special nutrition and normal food will be more difficult to find. We will try to help our customers meet these needs,” he stressed.

Part of this partnership approach will be through the development of new ingredients based around pea. With an R&D expenditure of €3 million per year and 10% of staff working in research, the company is looking forward. The latest addition to their pea protein offerings is Pisane B9, a new pea protein isolate that was created to meet the growing needs of manufacturers of high protein baked goods, including protein bars, granola bars, bread products and extruded crisps. Protection of IP therefore remains important. “We just recently proposed a patent to build up our know-how as we have built up a long history in the processing of peas over 25 years and we want to protect it,” Dewael added.

Another role as a B2B supplier could be in assisting a manufacturer in the marketing of benefits to the final consumers. This strategy that has been hit and miss for several suppliers over the last few years. Cosucra has now developed an ingredient branding for their pea-based ingredient, with the creation of a cartoon character called YOUPEA, which could be used by manufacturers using Pisane in their products. “We decided to launch a mascot on Pisane because we want to get more attention from consumers. Our customers are B2B people producing consumer goods, but we believe there is an important potential to raise awareness among consumers about the benefits of pea protein.”

Cosucra develops and produces naturally-sourced ingredients from locally grown chicory roots and peas. But we want to think about, more than just producing food ingredients. Thinking about food to improve it and make it better able to meet consumers’ expectations in the coming years. Working alongside clients from idea to launch, we deliver innovative solutions in a wide range of applications based on Inulin chicory fiber (Fibruline™), pea protein isolate (Pisane™), pea fiber (Swelite™) and pea starch (Nastar™). We think food better. Naturally.

The increase in the plant-based appetite is demonstrated in the retail space with NPD hitting shelves weekly, and pea protein is fast becoming a crucial ingredient... Read More

With the exception of sugar reduction in soft drinks, the UK’s top ten food companies have made limited changes to the healthiness of their products in response to... Read More

Dutch plant-based ingredients manufacturer Fooditive Group is launching GoPeasy, a pea-based dairy-free beverage that mimics the taste of milk. The beverage will be... Read More