You are in : All News > Lab-grown "clean" chicken: SuperMeat crowdfunds US$3m and partners with poultry producer 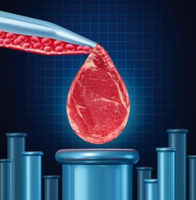 03 Jan 2018 --- Groundbreaking Israeli food-tech startup, SuperMeat, has raised US$3 million in seed funding and has joined forces with one of Europe’s largest poultry producers, PHW, establishing itself as a significant contender in the global shift towards lab-grown clean chicken.The recent seed round was led by US-based venture capital fund New Crop Capital and VC firm Stray Dog Capital with both firms saying they are openly committed to investing in more sustainable food systems.

They have previously backed big names in the alternative protein field including Beyond Meat and SunFed.
This new round of funding comes on the heels of a wildly successful Indiegogo campaign which raised US$230,000 in pre-orders for SuperMeat’s clean meat products.
SuperMeat’s clean meat is produced by growing cells that have been painlessly extracted from a chicken. The cells are then grown in conditions that allow them to thrive, forming high-quality chicken cuts.
The startup says this process puts an end to the industrial need to mass produce animals for slaughter, while eliminating exposure to animal waste and foodborne illnesses; the potential benefits for public health and animal welfare are therefore considerable.
At the same time, clean meat is also deemed highly beneficial for the environment, with drastically reduced carbon and ecological footprints compared to current meat production methods.
According to research conducted by Oxford and Amsterdam Universities, switching to clean meat will allow for a reduction of up to 98 percent in greenhouse gas emissions, 99 percent in land exploitation, and up to 96 percent in water usage.
Bringing products to market
With the recently secured funding, the Tel-Aviv-based company expects to bring its clean chicken products to market in the very near future, at a price point similar to the conventional chicken products currently available on store shelves.
This comes at a critical moment for global food production, with the UN Food and Agricultural Organization has publicly proclaimed the importance of biotechnology in securing alternative protein sources for a rapidly-growing world population, whose demand for meat is projected to double by 2050.
“We at PHW have time and again left the beaten path in conducting our business. This approach not only facilitates the development of best-in-class animal welfare concepts in our core poultry business but will also lead to the strengthening of our vegan product portfolio, confirming our leading role in the global consumer trend towards a cleaner, more protein-rich diet,” said PHW-Gruppe's CEO Peter Wesjohann.
“The equity investment in SuperMeat is evidence of our forward-thinking strategy. SuperMeat is consistent with our pursuit to provide Europe with sustainable, clean foods – we do not see this transaction as a financial investment but rather as the beginning of a long-term strategic partnership.”
“We look forward to working together with SuperMeat and are committed to supporting the company in its research and development, as well as the strategic positioning of its products in the European market. Our R&D, marketing and distribution expertise will contribute to the success of this exciting and promising company, thereby contributing to the development of cultured meat.”
Clean meat movement gaining momentum
Clean meat, also known as cell-cultured meat or in-vitro meat, is produced from animal cells that are grown to vast numbers from a single biopsy, taken without hurting the animal itself.
The production of clean meat begins by incubating cells in a media that is rich in nutrients. Those nutrients help the cells thrive and divide. It is biologically the same as the meat that comes from animals.
It is described as being “healthier, humane and cheaper” with driving factors for growth such as the rise in veganism as well as ethically, politically and environmentally-motivated eating habits.
Many predict the future will be full of lab-grown meat.
Last August billionaire entrepreneurs Sir Richard Branson, Bill Gates and global agricultural company, Cargill was among a group of investors who have backed lab-grown “clean meat” innovators Memphis Meat, signaling just how significant cell-cultured meat is expected to be in future years.
Based in the San Francisco Bay Area, Memphis Meats is also developing methods to produce meat directly from animal cells, without the need to breed or slaughter animals.
It released the world’s first “clean meatball” in February 2016 and plans to bring real meat to the market that is marketed as significantly better for the environment, animals and public health.
Mass production possible
SuperMeat includes scientists, conscious meat eaters, vegans, environmentalists and health advocates who share the same ideologically and are scientifically driven towards creating a humane, animal-free solution for global nutritional security, one, they claim, will drastically reduce carbon emissions into the environment.
The startup claims to be the first company to have ever worked on clean chicken meat products for mass production, believing that eliminating the chicken meat industry is important since numerically, hens are one of the most eaten animals worldwide.
Developing clean chicken will also help reduce the chance of future pandemics that stem from the crowdedness of hens in factory farms.
“We’re proud that SuperMeat is at the forefront of the rapidly-evolving clean meat industry,” said Ido Savir, co-founder and CEO of the company. “Our team is comprised of a diverse group of top-tier scientists, food engineers and chefs, working together with the best production experts from the pharmaceutical industry to create a new generation of meat products that are sustainable, cost-efficient, animal-friendly, and of course – delicious.”
“We are proud to partner with a top-tier meat producer like PHW; this partnership will enable us to bring to market a revolutionary new generation of tasty, sustainable meat products throughout Europe and beyond.”
By Gaynor Selby

Oatly, ProVeg and The Vegan Society among founders of UK Plant-based Food Alliance

A coalition of civil society groups and businesses have launched a new organization, the Plant-based Food Alliance UK, to act as a voice for Britain’s growing... Read More

The dairy sector is diversifying to meet planetary health, nutrition and flavor demands. Among these, sustainability credentials for real dairy products and vegan... Read More