You are in : All News > Aleph Farms attracts US$105M from “top-tier partners” as cultivated meat poised for market entry 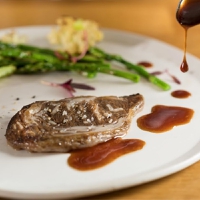 08 Jul 2021 --- Aleph Farms – the company behind the world’s first cultivated beef steak and ribeye cuts and the first cultivated meat grown in space in 2019 – has secured US$105 million in Series B funding. This edges the Israeli start-up closer to commercial production, slated for next year.

To date, Aleph Farms has raised more than US$118 million. The company is making real progress in bringing steaks made directly from non-genetically modified animal cells to market.

The latest cash injection will see manufacturing operations scaled up and international operations grow. Product lines and technology platforms will also be expanded as the company gears up for its initial market launch in 2022.

“Aleph Farms is one of the most technologically advanced companies in the world developing cultivated meat products. We’ve built a large-scale cultivation platform based on five proprietary modules that enable us to achieve cost-parity within five years from launch,” Didier Toubia, co-founder and CEO of Aleph Farms, tells FoodIngredientsFirst.

“Our unique cell lines have the capacity for long-term growth and are not genetically engineered and not immortalized.”

“We focus on structured meat products, steaks. We don’t make ground meats. Other companies see whole-muscle-cut meat as some type of Holy Grail. For us, it’s not enough to just make a protein that fills a nutritional gap, so we bypassed the easier step of developing hamburger or meatball products and focused on steaks.”

“Aleph Farms will use the funds to execute its plans for large-scale global commercialization of cultivated beef steaks and portfolio expansion into new types of animal protein,” Toubia continues.

Cultivated meat products across the UAE
DisruptAD is among the latest investors in Aleph Farms, and this is also expected to help strengthen Abu Dhabi’s long-term focus on food resilience.

As a strategic partner to DisruptAD, Aleph Farms plans to investigate the potential for a manufacturing facility in Abu Dhabi to supply its cultivated meat products across the UAE and the broader GCC region.

“This additional capital from top-tier partners with unparalleled experience and expertise brings us significantly closer to our vision of providing secure and unconditional access to high-quality nutrition to anyone, anytime, anywhere,” Toubia details.

“We see food security as a potential cornerstone for creating regional collaboration and stability in the region. As food security is a challenge that all countries in the Middle East face, collaborating on solutions like cultivated meat can provide means for long-standing peace in this region.”

Aleph’s food security vision is about producing quality meat locally for anyone, anytime, anywhere, even in the most remote areas impacted by climate change the most.

“Climate affects agriculture and vice versa, so they are deeply interconnected. The effect of climate change on agriculture goes a long way to increase or decrease food security and invariably food nutrition through its impacts on agricultural lands. This is because the more food insecurity there is, the more issues of undernutrition are observed,” Toubia says.

Environmental impacts
He also cites new studies by CE Delft, saying that cultivated meat could use up to 95 percent less land and 78 percent less water compared to conventional beef production.

“This data on the projected environmental footprint of cultivated meat emphasizes its role in providing the global world population with quality, and delicious meat, independently of climate or availability of natural resources,” he continues.

“DisruptAD’s investment in Aleph Farms will help bolster Abu Dhabi’s long-term focus on food resilience and is a direct continuation of the momentum for creating more peace and stability in the region.”

“Shared strategies concerning food security play a significant role in regional collaboration. The Emirates have shown that one of the region’s central goals includes supporting the transition toward sustainable and resilient food production systems,” he says.

Mansour AlMulla welcomed Aleph Farms on behalf of DisruptAD as its first Israel-based partner. “Our partnership with Aleph Farms underpins our long-term desire to accelerate the path for technology pioneers and change leaders that are building technologies of tomorrow,” he says.

Cultivated meat history
The cultivated meat space, in general, is heating up with the mass potential for commercialization next year from other strong contenders in the space. In the last few years this burgeoning industry is making giant leaps forward, going way beyond the proof of concept stage.

Some other key players include Dutch food technology company Mosa Meat (a spin-off from Maastricht University), which is also making strides. In fact, the original inventors of the first cell-based hamburger are celebrating an important milestone.

This week marks the 98th anniversary of when Dutch researcher Willem van Eelen – the so-called “godfather of cultivated meat”–  was born.

According to the Good Food Institute, Van Eelen’s inputs to the field catalyzed the Dutch government to fund the first cultivated meat consortium and motivated researchers like professor Mark Post, co-founder of Mosa Meat, to enter the field.

In other moves, cultivated meat, poultry and seafood pioneer Memphis Meats recently rebranded as Upside Foods. It also announced its first consumer product – cell-based chicken, claiming it could be ready by the end of this year, pending regulatory review.

Last December, Eat Just became the first company to obtain regulatory approval to produce and sell their cultivated chicken nuggets in Singapore. It followed a rigorous consultation and review process by the Singapore Food Agency. The approval is anticipated to be the “first of many” for similar lab-grown meat businesses in Singapore and elsewhere.

In other developments in cultured meat, a new project aims to remove the need for animal-derived products completely and upcycle existing agro-industrial by-products to be used as a growth media for culturing meat cells in a lab environment.

Alpeh’s latest funding round was also led by the Growth Fund of L Catterton, the largest global consumer-focused private equity firm. It also saw participation from Skyviews Life Science and a consortium of leading global food and meat companies, including Thai Union, BRF, and CJ CheilJedang.

Upside Foods, formerly known as Memphis Meats, has closed a US$400 million series C funding round, the most significant round in industry to date. This latest raise is... Read More