You are in : All News > Kerry downsizes its growth outlook while topping US$3.5 billion revenue mark 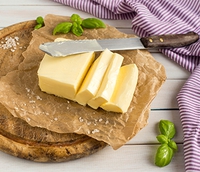 10 Aug 2017 --- Group revenue increased by almost 5 percent topping the €3 billion (US$3.5 billion) mark for Irish food giant Kerry in its half year results, but the company’s outgoing chief executive has warned that full-year profits will be lower than expected. The maker of Irish butter, cheese and sausages, has been feeling the impact of adverse currency movements since Brexit which sent sterling tumbling and has left the currency volatile ever since.

Kerry reports its finances in euros but does much of its business in the UK and so makes a lot of its money in sterling.

“Against a background of significant adverse currency movements, we achieved a strong overall business performance in the first half of 2017, outperforming market growth rates and delivering a 7.5 percent increase in adjusted earnings per share,” says Kerry Group Chief Executive Stan McCarthy who is retiring next month and as director of the Group at the end of the year. Edmond Scanlon has been appointed the new CEO.

Highlights
The changing marketplace and consumer consumption trends continued to drive demand for Kerry’s taste & nutrition technologies, according to the Irish food giant.

The Group says that is maintained a strong overall business performance in the first half of 2017 despite significant adverse currency movements and increased raw material pricing.

“Kerry Foods continues to perform well delivering sustained volume growth, despite the uncertainty following the UK electorate’s decision to leave the European Union and the significant devaluation of sterling,” it says.

Kerry is responding to consumer demand for real ingredients with better, more authentic and nutritious taste experiences. With 40 years’ experience and 24,000 staff on six continents, Kerry has a renewed focus on Taste & Nutrition where the science of taste merges with the science of nutrition. They combine a deep understanding of taste with an in-depth knowledge of people, culture, life stage and daily nutritional needs. By partnering with Kerry, customers are taken on a journey to make food, beverage and pharma products that people enjoy and feel better about. Kerry calls this Leading to Better.

21 May 2020 --- Sprüngli has launched the Grand Cru Absolu, the world’s first chocolate with only two ingredients. The Switzerland-based producer of grand cru chocolate... Read More

21 May 2020 --- As consumers move towards vegetarian and vegan choices, the need for a carmine alternative is more pressing, pushing ingredient suppliers to provide a solution for... Read More