You are in : All News > UK: Parliamentary inquiry finds 2 Sisters problems “are not a one-off”

UK: Parliamentary inquiry finds 2 Sisters problems “are not a one-off” 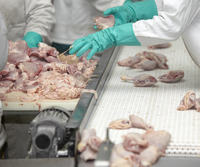 21 Nov 2017 --- British MPs have ruled that problems at the English poultry and food manufacturing group 2 Sisters – which suspended operations last month due to hygiene concerns following an undercover operation – were "not a one-off”. The Environment, Food and Rural Affairs Committee launched its inquiry into 2 Sisters and poultry standards following an expose by The Guardian and ITN which found evidence of 2 Sisters workers altering the slaughter date of poultry, raising the risk that shoppers could end up buying meat past its use-by date.

The undercover investigation also captured workers dropping chicken on the floor of the processing plant and returning it to the production line, among other hygiene issues.

The parliamentary inquiry examined evidence sessions, looked at the issues raised at the 2 Sisters plant and the role and performance of the Food Standards Agency, Sandwell Metropolitan Council and accreditation bodies.

It describes how the past record of the 2 Sisters Food Group is “far from pristine.”

It also explored the potential ramifications of the allegations made against 2 Sisters for the poultry sector and the wider food chain.

Report findings
The report notes that there is, "no systematic process for bringing together the various audits and assessments conducted by different accreditation and regulatory bodies; as such there is no single overarching view about standards in a particular plant or facility."

"After Assured Food Standards suspended 2 Sisters' Red Tractor accreditation it did not immediately and especially inform the Food Standards Agency."

It also found that "unannounced visits are not completely a surprise; even an unannounced visit gives processors a period of around 30 minutes' grace before the inspection begins and as a result "people will tend to be on their best behavior."

"The problems identified at the 2 Sisters plant at West Bromwich are not a one-off. The past record of the 2 Sisters Food Group is far from pristine and there are valid questions to be asked of its corporate governance structure.”

Wakeup call for all accreditation firms
Following the 2 Sister food scandal, several UK retailers including Sainsbury's, Marks and Spencer, Lidl and Aldi, suspended taking fresh chicken from the West Bromwich plant, which accounts for one-third of all chicken processed in Britain.

Despite a temporary suspension of work, 2 Sisters resumed production in early November.

"Our inquiry should serve as a wakeup call for all accreditation firms and cause them to improve their processes and remove any loopholes that may exist, not just those discovered through our inquiry,” says Neil Parish MP, Chairman of the inquiry.

“Food supply chains are sensitive and easy to disrupt when retailers and consumers lose confidence in food quality or safety. Large producers and retailers have a responsibility to protect, rather than undermine, the UK’s food producers."

Letter from Ranjit Singh Boparan
2 Sisters Group chief executive Ranjit Singh Boparan was called to appear before a parliamentary select committee where he apologized for the scandal, detailed comprehensive training programs for staff and said the company would pay for independent inspectors to watch over all of his 12 UK chicken plants.

He also wrote to the Committee on 10 November, confirming in writing the commitments he made to the Environment, Foods and Rural Affairs Committee during his hearing. These commitments are:

- Placing a full-time FSA inspector in West Bromwich poultry plant (now in situ) as well all other poultry plants (w/c 13th November).
- Sharing the forensic report analyzing the Guardian/ITN footage with the Committee.
- Inviting the Committee to visit a 2 Sisters Food Group plant, announced or unannounced.
- Installing CCTV with complete coverage in all poultry plants (within 120 days), and establishing a CCTV committee.
- Implanting mystery workers into all poultry factories by the end of January 2018.
- Sharing progress on the above with the Committee.

"We are pleased that Mr. Boparan has written to the Committee and restated his commitment to improving standards at Two Sisters’ production facilities,” adds Parish. “The commitments are on the public record and we will be closely monitoring their implementation with a view to investigating further if required.”

“It is important that consumers in both the UK and in our vital export markets feel confident in the quality of our food standards. We have made it quite clear that we take his assurances very seriously. We will be closely monitoring their implementation."

Meanwhile, the UK’s Food Standards Agency welcomes the findings of the Efra select committee and will make a formal response in due course.

“We are continuing to investigate the allegations made by ITV and the Guardian concerning the 2 Sisters poultry plant in West Bromwich and will publish our findings when the work is completed,” a spokesperson said.

Shanghai-based Haofood, pioneer in the development of plant-based chicken from peanuts, will take its proprietary protein Innotein to the next phase of growth following... Read More