You are in : All News > UK: Chicken production resumes at scandal-hit factory 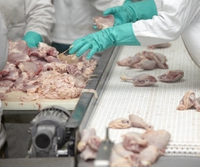 06 Nov 2017 --- The UK chicken plant at the center of a safety scandal is restarting production this week following the expose last month which revealed poor hygiene standards and serious food safety breaches. The 2 Sisters plant is resuming production from today (November 6) with the majority of Britain’s supermarkets due to take chicken supplies following a suspension of several weeks since the scandal first broke.

The 2 Sisters 850-strong workforce has gone through an intensive re-training program and inspectors from the UK’s Food Standards Agency are on-site at the West Bromwich-based processing plant at all times to oversee the staff.

Operations inside the factory, the UK’s largest supplier of supermarket chicken, are also being constantly monitored by additional CCTV which has been expanded across the site.

Last month, a joint investigation was carried out by ITV News and The Guardian where undercover filming over a 12-day period revealed seriously poor hygiene standards, stories of food safety records being altered, some employees changing food date labels and chickens being dropped on the floor and put back on the production line.

FoodIngredientsFirst originally reported the story here detailing the full allegations made against 2 Sisters, followed by another article here talking about the fallout from the scandal.

Following the airing of the undercover footage, 2 Sisters Group chief executive Ranjit Singh Boparan was called to appear before a parliamentary select committee where he apologized for the scandal, detailed comprehensive training programs for staff and said the company would pay for independent inspectors to watch over all of his 12 UK chicken plants.

Supermarkets resuming orders
Tesco, which hasn’t been taking 2 Sisters chicken for around five weeks, said it is now satisfied the issues have now been addressed.

“Following the re-training program carried out by 2 Sisters at its West Bromwich site, we can confirm we will begin to receive orders from the site again in the coming days. We are satisfied the issues have been addressed and work will now be carried out to our high production standards,” said a Tesco spokesperson.

“We’ll continue to work with 2 Sisters and the FSA as the site gets back up and running.”

Marks & Spencer and discounter Aldi are also resuming receiving supplies from 2 Sisters, while Sainsbury’s told The Guardian that it has no plans to resume supplies.

A Marks & Spencer statement to The Guardian read: “We have assessed the changes made at the site by 2 Sisters and are confident it can meet our high production standards. We will work closely with the site’s management team and the FSA in the coming weeks.”

Solvay has invested in Suanfarma’s Cipan manufacturing site in Portugal to develop its biotechnological capabilities and support the development of natural... Read More