You are in : All News > The snack factor: (Part 2) Popcorn sales pop as snack hailed authentic and guilt-free 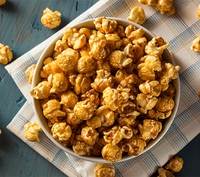 12 Oct 2017 --- Popcorn is one of the smaller snacks sub-categories but one that has seen consistent growth in recent years, mainly as a result of the promotion of ready-to-eat popcorn as a convenient, tasty and better-for-you snack option, suitable for in-home consumption, particularly sharing social occasions, and for on-the-go snacks, as well as its more traditional popularity at cinemas and sporting events.

There was a double-digit rise in global launch numbers recorded by Innova Market Insights in the 12 months to the end of May 2017, taking the sub-category’s share of snacks introductions up to 4.7 percent. In the US, the traditional home of both popcorn and snacking, popcorn had an even stronger role, with its share of launches up from 8.8 percent to 9.6 percent over a 12-month period. The US accounted for a quarter of global launches, only just behind Europe, despite a large number of countries covered in that region.

Conor O’Rourke, Business Development Manager for Snacks at Kerry Europe, discussed the consumer research into snacking habits with FoodIngredientsFirst, he says: “In relation to authenticity, we know that the bulk of the sales in the market is from a core range of well-known tastes and while consumers are certainly interested in trying new flavors, they are still looking to taste their favorite familiar flavors in snacks providing they deliver on their expectations.”

“We have definitely seen an evolution of many existing big brands to become more authentic in terms of their ingredients and also more nutritious with lower levels of sodium and fat for example, but we will also see many new types of snacks being launched, targeted at the many different need states of consumers whether that is a healthy, guilt-free snack format or premium snacks that offer some indulgence.”

O’Rourke also notes an interest in new flavor combinations and sensorial experiences. “Consumers are interested to try sweet and savory combinations along with dessert inspired flavors,” he says, “Particularly in the popcorn category which has seen a lot of innovation in flavors.”

For Kerry, reducing the amount of sugar in snack products is certainly something that the company is seeing a demand for. O’Rourke confirms that “a number of customers have been asking about sugar reduction recently and in particular for popcorn and other snacks with sweet tastes”.

The ready-to-eat popcorn market continues to grow in the US, despite it already being the most developed market in the world. Double-digit value growth in 2016 took sales to nearly US$1.3bn through multiple retailers alone (IRI data). As the market has developed, traditional popcorn flavors such as cheese, butter and caramel are continuing to be popular. But there is also a definite move to more unique and bold options, featuring stronger cheeses, such as Parmesan and more spicy components, such as jalapeno and sriracha, as well as more sweet and savory combinations of all kinds.

A new slant is also being developed by upmarket retailer Whole Foods, with its T Pops Tokyo Style Popcorn in Nori Toasted Seaweed, Matcha Green Tea and Curry variants, while Pop IQ has moved into the popping of other grains, with its range of organic, non-GMO, domestically-produced air-popped sorghum grains, featuring a “smart snack,” superfood positioning. Four flavors – Kettle, Tuscany, Sea Salt & Pepper and Cheddar – are all packaged in stand-up pouches.

The new, smaller, artisan-style popcorn brands, such as Propercorn, Joe & Seph’s, and Tyrrells Poshcorn have also been seeing good growth in recent years. PepsiCo also extended its presence in the market in 2016 with the launch of its premium Pop Works & Company brand, produced using a wet popping method to ensure a light and crunchy finish.

Snyder’s-Lance of the US, via its Kettle Foods subsidiary, also bought the 74 percent of UK brand Metcalfe’s Skinny that it did not already own in the autumn of 2016. In 2017, plans to launch the brand in the US were reported to be facing problems with trademark infringement and unfair competition lawsuits brought by rival Amplify Brands, which owns the Skinnypop better-for-you brand.

You can read the first part of this report here.

Kerry has officially opened a 21,500-square-foot facility at its Jeddah operation in Saudi Arabia to produce sustainable food ingredients. These will be distributed... Read More

Kerry’s Global Taste Charts for 2022 are in, displaying the return of consumers’ sense of adventure scouting for “new tastes paired with familiar... Read More

Fast food giant Burger King has pledged to ramp up its commitment to cutting carbon emissions by shifting to a 50% plant-based menu by 2030. And, kicking off the new... Read More

In a highly competitive space such as plant-based NPD, it can be difficult for brands and businesses to keep up with dynamic consumer needs. Being one step ahead and... Read More