You are in : All News > Beyond Meat confirms plans to expand to UK in 2018

Beyond Meat confirms plans to expand to UK in 2018 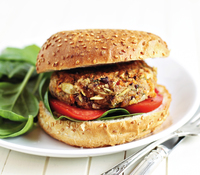 12 Oct 2017 --- Vegan company Beyond Meat has announced further plans for expansion, noting that it intends to bring its famous meat-free Beyond Burger to the UK by early 2018. The plant-based burger is sold in the meat aisles of supermarkets despite being 100 percent vegan. It is described by Beyond Meat as looking and cooking just like beef, and it has been available in the US since last year.

Speaking at the Compassion in World Farming animal welfare conference, Beyond Meat Chairman Seth Goldman described the company’s expansion plans. Goldman gave the first quarter of 2018 as the planned launch time and spoke of UK expansion as a “profound opportunity” for plant-based protein.

“In the case of the UK, we have strategically decided this is a priority market,” Goldman said. “We want to find significant partners to go to sale quickly.”

Goldman added that the company plans to launch into both the UK retail and foodservice sectors, with “more emphasis on retail.”

The company’s innovative Beyond Burger debuted in the meat department at a Colorado Whole Foods Market last year and has since expanded to 11,000 distribution points including Safeway, several fast-food chains, Yale University, vegan market Green Common in Hong Kong and foodservice giant Sysco.

In a statement sent to FoodIngredientsFirst, the company said: “Internationally, The Beyond Burger is currently sold at Green Monday and The Butchers Club in Hong Kong, the meat capital of the world. We are definitely pursuing other international leads for 2018, including focusing on the UK as our first entry point into Europe, and hope to soon bring delicious, satiating plant-based meat to more consumers worldwide. ”

Beyond Meat’s plans for expansion come at a time when plant-based alternatives to meat are trending worldwide. A study funded by Quorn has shown that the company’s plant-based protein can be as beneficial for muscles as animal proteins, FoodIngredientsFirst’s sister site NutritionInsight reports.

“What we’ve really found over the last five years is that the number of vegan claims on products has increased by over three times,” comments Kara Nielsen of Innova Market Insights. “What’s really significant about that is we see plants having a role not only in the traditional plant-based food items like non-dairy milks or meat substitutes but also in more categories like fats, spreads, chocolate bars and also things like ice coffee.”

Merit Functional Foods has revealed its high-protein new pea ingredient with a grit-free texture and without the sedimentation with formulations in proteinous... Read More