You are in : All News > The snack factor: (Part 1) Nuts and seeds driving NPD in savory category 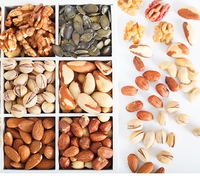 09 Oct 2017 --- Not only did new product activity in the snacks market continue to forge ahead in 2016 and the first part of 2017, but the growth rate actually increased slightly. Innova Market Insights recorded a rise of 10 percent in overall global launch numbers in the 12 months to the end of May 2017, upon a still impressive near-9 percent in the previous 12-month period. The category, as defined by Innova Market Insights, includes not only traditional savory or salty snacks and snack nuts & seeds, but also products such as meat snacks, popcorn and fruit-based snacks, as well as finger foods and hors-d'oeuvres.

With a developing market, a large number of countries and rising population levels, Asia now leads in terms of launch activity. It accounts for just under 35 percent of the total in the 12 months to the end of May 2017, ahead of Europe on just under 31 percent. North America comes third at a distance, with just over 14 percent. This is ahead of Latin America, which saw particularly strong growth over the year to reach 11 percent.

Salty/savory snacks continue to lead globally in terms of launch activity, however, with around 35 percent of the total recorded in the 12 months to the end of May 2017. This puts it ahead of snack nuts & seeds with just under 29 percent and fruit-based snacks with just under 18 percent. The other three sub-categories are much smaller, with meat snacks and finger foods/hors-d'oeuvres on just under 7 percent each and popcorn at just under 5 percent.

Ongoing innovation in the salty snacks market has resulted in a growing range of ingredients and flavors being used, often in increasingly complex formulations. While potatoes, corn, wheat and soy continue to be key ingredients in snack foods, an increasing range of basic raw materials are now appearing as alternatives. This is not only to add variety, but also to give a healthier image, or even to allow gluten-free claims. Launches have included bread crisps, pita chips, plantain chips, cassava chips and sweet potato chips, as well as products featuring a whole range of non-traditional ingredients in the form of different vegetables, fruits, seeds and pulses.

Nuts
Nuts are an increasingly popular snacking option and taking a rising share of launch activity in the global snacks category. Factors driving growth include rising publicity about their health attributes, the greater availability of different types and mixes, and technological advances that have allowed the development of new coatings, flavors systems and packaging formats.

The nutritional properties of nuts continue to be promoted, with nearly 40 percent of global snack nut & seed launches recorded by Innova Market Insights in the 12 months to the end of May 2017, using a health claim of some kind. This rises to over 60 percent in the US.

Speaking to FoodIngredientsFirst, Harbinder Maan, Almond Board of California, says: “Almonds are the number one nut consumers associate with snacking, and pair well with all of these trends, as there are over 15 forms to choose from.”

According to new from Innova Market Insights released earlier this year, California almonds were the number one nut used in new products worldwide in 2016, the tenth year that almonds have held the lead position for nuts used in new product introductions.

According to the Innova Global New Products Report, almonds were featured in 38 percent of new food introductions featuring nuts in 2016, a five percent increase from the previous year. Key categories for worldwide almond product launches include confectionery (23 percent), bakery (20 percent) and snacks (18 percent).

“In terms of creating healthier bakery and snack options, versatile ingredients like almonds are a key component. Whether chopped, sliced, butter or milk, there’s an almond form to fit into a variety of healthy bakery and snack choices. Almonds can now officially be called 'healthy' according to the FDA’s new guidelines, as they contain predominantly ‘good’ monounsaturated fats and provide 14 percent of the Daily Value for fiber. A one-ounce serving of almonds contains 14 grams of total fat, of which 9 grams are monounsaturated fat and 3.5 grams are polyunsaturated fat  (another ‘good’ type of fat), along  with 4 grams of fiber.”

Rising interest in vegan diets has also driven activity in nuts and nut mixes, as well as in the snacks category overall. The use of vegan-friendly labeling has risen markedly in recent years in the food and drinks market as a whole and in the snacks category many products have always been naturally vegan or have managed to use vegan claims with relatively little in the way of reformulation or repositioning.

Over 7 percent of global snack nut & seed launches used a vegan positioning in the 12 months to the end of May 2017, rising to 12 percent in Western Europe, nearly 16 percent in the US and to an astonishing 26 percent in the UK, which has seen particularly high levels of interest.

Part 2 of this report will be available later this week.

The severe weather and flooding in Australia have damaged the latest macadamia crop leading to a reduced forecast by the Australian Macadamia Society (AMS), which... Read More

Premier Foods has launched a range of better-for-you fibrous-full cakes and pies with 30% less sugar and increased natural fruit, under the Mr Kipling brand. The move is... Read More

Snacking: The return of out-of-home snacks, the rise of protein fortification and healthy indulgence

As COVID-19 accelerated demand for snacking, opportunities for innovation in an attempt to meet evolving consumer demands is seeing an uptick. Ranging from nutritious... Read More