You are in : All News > “Tamper-proof” traceability: OpenSC raises US$4m seed funding for digital platform 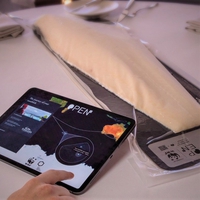 17 Sep 2019 --- Australia-based OpenSC has raised US$4 million in seed funding, advancing the transparency of food products known to have significant environmental or social injustice risks within their supply chains, such as seafood and palm oil. The impact tech venture was developed in partnership with the World Wide Fund for Nature Australia (WWF-Australia) and BCG Digital Ventures (BCGDV). OpenSC will be using funds to propel the development of its digital platform, which leverages blockchain and other technologies.

“Blockchain technology can help mitigate trust issues by providing immutable records of data and enables the creation of systems that are not controlled by any single entity,” Markus Mutz, CEO of OpenSC, tells FoodIngredientsFirst. “Through this, blockchain technology can, for example, help with the creation of digital identities for physical products and the recording of relevant data around these products.”

“This can not only inhibit fraud and counterfeit products, but can also help optimize business supply chain operations, reduce costs and enabling producers to better manage issues such as product recalls. Platforms and systems with this type of functionality make all players along the supply chain feel comfortable in participating, unlocking tremendous value,” he adds. 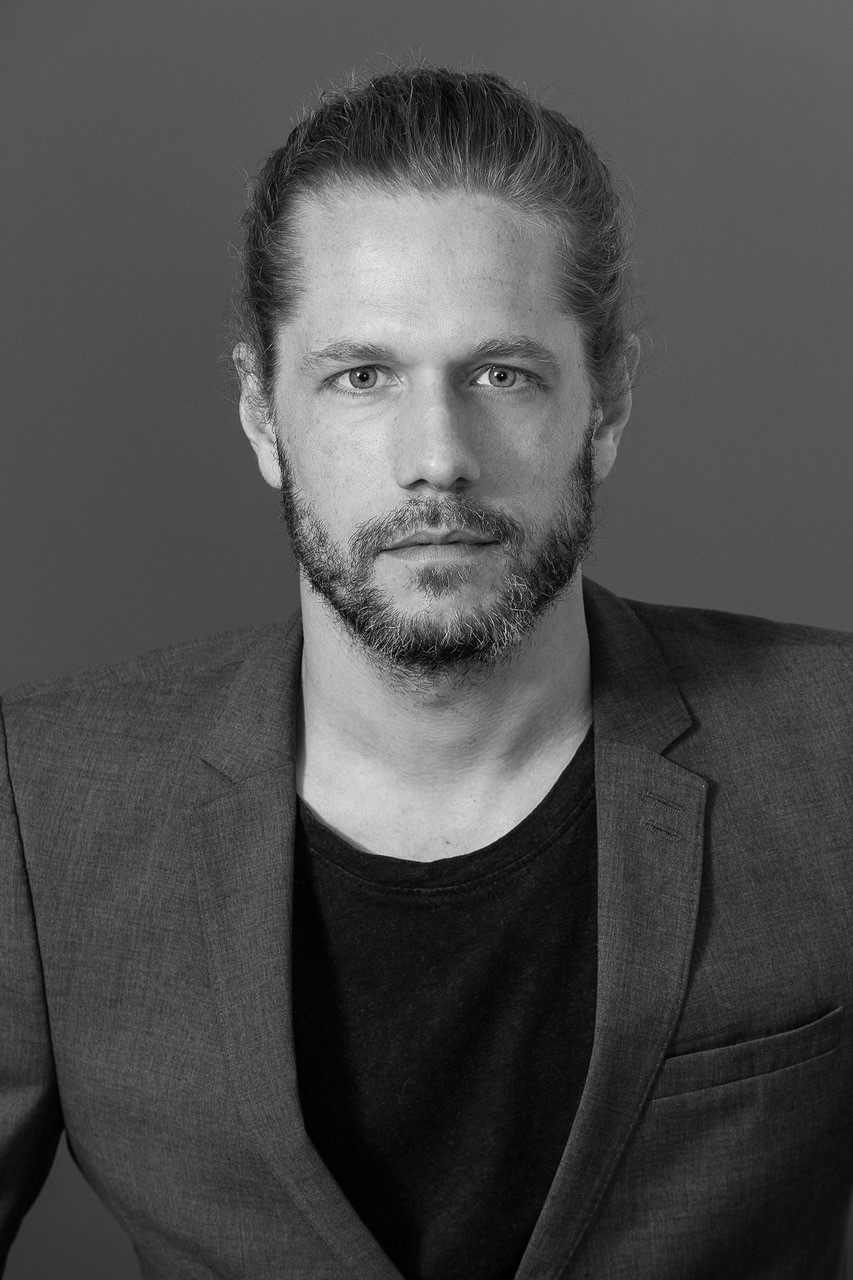 Markus Mutz, CEO of OpenSC.Industry has taken interest in the OpenSC platform, which is designed to assist businesses in avoiding illegal, environmentally-damaging or unethical products. In addition to scaling up work with Austral Fisheries, OpenSC also has recently announced a collaboration with Nestlé. As the first major food and beverage company to pilot blockchain technology in this way, Nestlé will use the OpenSC platform to trace milk products from farms in New Zealand to consumers in the Middle East, and to later track palm oil sourced in the Americas.

The seed round follows a successful international pilot with Austral Fisheries (part of the Maruha Nichiro Group, one of the world’s largest seafood companies), tracking its Glacier 51 Patagonian Toothfish product. It also follows a positive reception when the impact venture was launched in January at the World Economic Forum in Davos, Switzerland. OpenSC is the first impact venture to spin out of Panda Labs, WWF’s global innovation program, founded in 2017.

Impact investors who have joined the round include Working Capital (supported by Humanity United), an early-stage venture fund focused on scalable solutions that promote ethical supply chains and protect vulnerable workers, and Christian Wenger, founder of digitalswitzerland and a key figure driving technology innovation and entrepreneurship in Switzerland.

“We’ve reached a point where technology has evolved and can be harnessed to create a whole new level of transparency and rebuild trust,” says Mutz. “At OpenSC, we believe this will revolutionize the way we humans consume and, therefore, the way that we humans produce.”

“OpenSC gives companies and consumers a new level of visibility into supply chains. Consumers will be empowered with trustworthy, tamper-proof information about the individual products they are buying,” concludes Dermot O’Gorman, CEO of WWF-Australia. 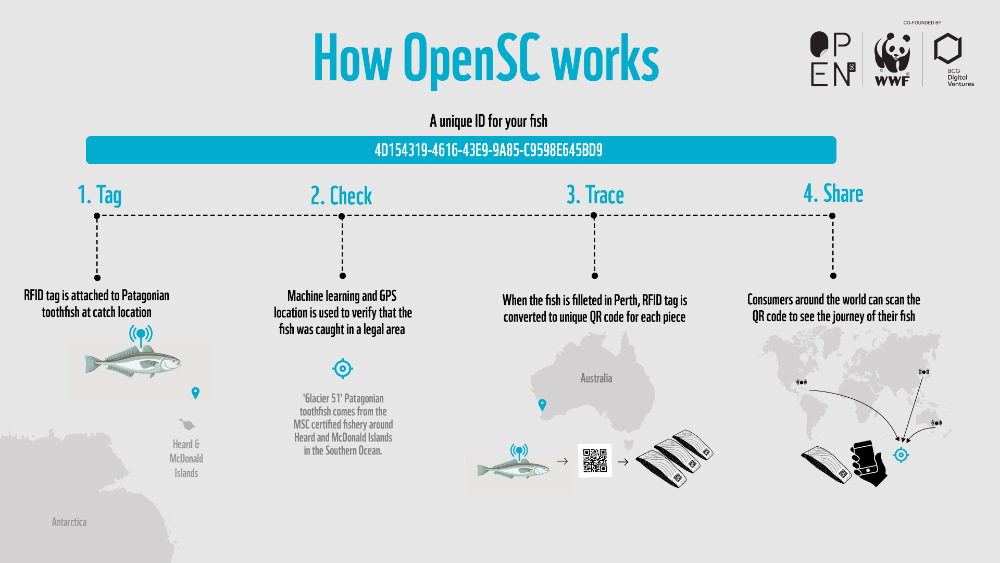 Flowchart of OpenSC’s functionality.
OpenSC enables businesses to track their products by assigning a unique ID to an individual product at its point of origin, such as the moment a fish is caught at sea. Blockchain is a digital ledger that cannot be tampered with. This system can store a range of data, such as when, where and how a product was produced; when and how it moved from origin to the consumer; and information about its social or environmental credentials.Businesses and consumers can use the OpenSC platform to do three things:

Consumers can use OpenSC to learn more about the products they purchase. In the example of wild-caught Patagonian toothfish, consumers can learn more about this product by simply scanning a product QR code with their smartphone camera, through which OpenSC will show where the fish was caught, how it has journeyed along the supply chain, and importantly - distinguish that it is sourced from a certified sustainable fishery and was not caught inside an established marine protected area.

Fostering transparency with blockchain
Emerging technologies are bending the curve on the loss of biodiversity and other sourcing malpractices, which are often the result of complex and opaque global supply chains. Although increasingly in use, blockchain is not without its limitations. The most notable challenge facing blockchain in its adoption in food across the chain is arguably its novelty, as highlighted by Raja Ramachandran, Co-Founder of ripe.io, in an exclusive interview with FoodIngredientsFirst.

Even still, the digital system has been backed by notable players, such as tech giant IBM, which is working on a multitude of technology-led solutions designed in response to heavy issues burdening the agri-food chain. In April, Nestlé and Carrefour joined forces with IBM to give consumers the ability to access information from the first blockchain on a national brand in Europe. Carrefour was one of the founding members to join the IBM Food Trust blockchain network in October 2018.

Similarly, Walmart is employing blockchain to track lettuce and spinach through its supply chain. The move is aimed at seriously ramping up food safety following US outbreaks of E. coli in Romaine lettuce and salmonella in a number of products from eggs to breakfast cereal.

According to Tetra Pak’s latest research, environmental sustainability efforts have taken a backseat for food producers and manufacturers in light of the economic... Read More