You are in : All News > Securing citrus flavors: Givaudan champions biodiversity by funding Californian academic program

15 Mar 2019 --- Global flavor and fragrance house Givaudan and the University of California, Riverside (UCR) have embarked on the next phase of their long-term collaboration, with a US$3.5 million donation from Givaudan to support UCR’s Citrus Variety Collection. The donation is set to pay for a 2.8-acre screened structure for new trees and back-up trees and seeks to protect one of world’s most extensive and diverse assortments of citrus from the impending threat of Citrus Greening Disease, also known as Huanglongbing (HLB). The announcement comes at a time when citrus flavors are in high demand globally and peaking in the beverage space.

HLB is caused by a bacterium that is transmitted by the Asian Citrus Psyllid, a type of bug. The bacterium affects how nutrients are transferred from root to tree and once infected, the tree yield will be lower, the fruit’s appearance and flavor are affected and the disease ultimately kills the citrus tree.

“UCR’s Citrus Variety Collection is a highly valuable collection which would be difficult to initiate today, and many questions have been raised over what could potentially happen if HLB was to affect it,” Streich tells FoodIngredientsFirst. “The idea is to screen the 2.8 acres where the collection is and prevent the spread of HLB – that is the biggest issue. We must take the right steps to protect this valuable collection.”

HLB is present in all citrus growing regions of the world, according to Streich, including Florida, Brazil and Mexico.

“California is one of the regions which is taking steps to fight against it and there have been some positive programs in place to target it. UCR is actively fighting HLB and learning from other regions that have been impacted by it in the past, specifically Florida,” she explains.

The impact on US citrus production
According to data from CitrusGreening.org, HLB was first identified in Florida in August 2005. An estimated 80 percent of Florida citrus trees are infected, and some groves no longer productive. Within a few years of infection, many citrus trees become weak, have poor quality fruit, with lots of fruit drop, and trees may die or become useless.

The impact of citrus greening in Florida is demonstrated by estimates that the 2014/2015 orange harvest in Florida was the lowest in 50 years, down over 50 percent from the already low 2004/2005 harvest, according to the CitrusGreening.org website. The majority of this estimated drop is a result of the endemic presence of HLB. This loss is from a combination of divestment of citrus holdings and redirection of land use and reduced crop yield from existing trees.

Reduction in existing tree yields is due to a combination of disease associated fruit drop, smaller fruit and reduced fruit set. Related to these losses is an increase in per acre cost of production, due to increased vector control and enhanced nutritional programs as part of emerging HLB management practices. As of 2012, further economic losses have been realized in the loss of 6,611 jobs in all citrus and citrus-related sectors.

Alternative control and management practices are essential for the maintenance of a healthy commercial citrus-producing industry in Florida. The other commercial citrus-producing states (Texas, Arizona and California) now have isolated incidences of HLB infected citrus raising the concern that these states may follow in Florida’s footsteps if new management methods are not developed.

Research and citrus varieties
Research has found that some types of citrus and citrus relatives are more tolerant of the disease, but for the most part, HLB can affect all citrus fruits, adds Streich.

The research with UCR will focus on tolerant varieties to look for ways to develop trees that are resistant to HLB, for example, but it can, on some level, affect all types of citrus.

According to Streich, the collection is used to conserve and evaluate different types of citrus and provide a source for genetic diversity of citrus fruits. “The collection enables research on HLB as well as other citrus diseases, and even crops which are more popular from a flavor or functionality standpoint,” she notes.“With this, the collection provides a basis for resources. Certainly, our wish is that a cure or a solution will be found by doing our part to protect the collection.” 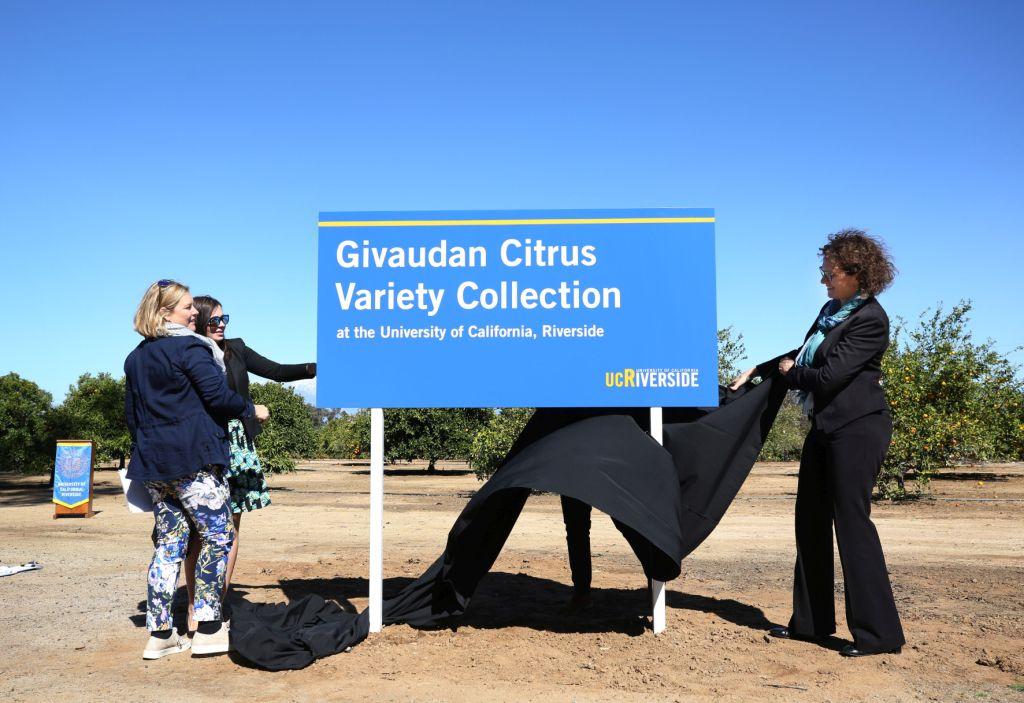 As for citrus flavors as a whole, Givaudan is continuing to look for new characters and taste profiles for what are some of the most popular flavors in the world.

Moreover, Streich mentions that the Tango mandarin citrus variety could be one fruit to watch for this coming year. Initially introduced by the breeding program by the UCR in 2008, tango mandarin is a fruit that Givaudan expects to boom in popularity. “It is an easy to peel mandarin, that consumers love, they are small and handy and can be eaten on the go, or popped in your handbag,” says Streich. “Sometimes it can take a while to ‘get off the ground,’ but we love the flavor. Tango mandarins have a delicate fruity, spicy nuance, even slightly tropical flavor,” she continues. “It is also one of the fruits that we focused on for our flavor development progress.”

As a whole, Givaudan’s citrus collection enables the flavor company to look at different varieties that are not commercially available or have some historical significance. “There are many exotic varieties that allow us to explore specific nuances and unexpected characteristics that might be found in citrus flavors. When you look at the overall strategy of the company to look at exciting taste profiles, and specifically in the area of citrus space, this enables us to be able to provide those,” Streich adds.

Givaudan’s collaboration with UCR
Starting in 2006, Givaudan’s collaboration with UCR has led to the discovery of citrus ingredients for flavor creation. In 2011, Givaudan created the Givaudan Citrus Variety Collection Endowed Chair to support and maintain UCR’s Citrus Variety Collection. In addition to building the screenhouse, the latest donation will add to the endowment, assuring support of the collection in perpetuity, says Givaudan.

The collection, which includes more than 1,000 types of citrus, and occupies 22.3 acres on the UCR campus, as well as two smaller, remote sites will be known as the Givaudan Citrus Variety Collection at the UCR.

“Protecting citrus biodiversity and creating a sustainable future is a primary focus for Givaudan,” says Louie D’Amico, President of Givaudan’s Flavour Division. “Our long and ongoing partnership with UCR is one of the ways that Givaudan champions biodiversity within the overall context of our sustainability approach, A Sense of Tomorrow. We are pleased to make this gift and to continue the strong collaboration we have with this university.”

“Working with partners like Givaudan enables us to protect our collection while working on solutions which can help commercial citrus growers,” Kahn notes. “This announcement further cements our long-term collaboration with Givaudan, focusing our attention on the preservation of the citrus variety collection. This latest gift will help ensure that the collection is well protected.”

Givaudan is the global leader in the creation of flavours and fragrances, with its heritage stretching back over 250 years, the Company has a long history of innovating tastes and scents. From a favourite drink to your daily meal, from prestige perfumes to cosmetics and laundry care, its creations inspire emotions and delight millions of consumers the world over. The Company is committed to driving purpose-led, long-term growth while leading the way to improve happiness and health for people and nature. In the fiscal year 2019, the company employed over 14,900 people worldwide and achieved sales of CHF 6.2 billion and a free cash flow of 12.7% of sales. Let’s imagine together on www.givaudan.com.

Powered by innovation and creativity, Givaudan Taste & Wellbeing aims to shape the future of food by becoming the co-creation partner of choice to its customers. Built on its global leadership position in flavours and taste, the Company goes beyond to create food experiences that do good and feel good, for body, mind and planet. With an expanded portfolio of products across flavours, taste, functional and nutritional solutions and a deep knowledge of the food ecosystem, Givaudan’s passion is to collaborate with customers and partners to develop game changing innovations in food and beverage. Let’s imagine together the future of food. Learn more at www.givaudan.com/taste-wellbeing.

Global warming, climate events, plant diseases, the increase of the fresh fruit market and the decline of juice consumption all weigh heavily on the availability, cost... Read More