You are in : All News > Flavor trends: Discoveries, sophistication and connections among Innova Market Insights’ latest tips 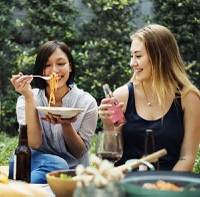 29 Apr 2019 --- Consumers are on a journey of discovery, moving out of their comfort zones to explore bolder flavors and multisensory food experiences. Sixty-four percent of US consumers state that they “love to discover flavors from other cultures,” according to a 2018 Innova Market Insights consumer survey. The market researcher has just released its annual flavor trends report, which highlights consumers’ sense of culinary adventure and curiosity for novel combinations.

Some of the latest flavor trends being highlighted by Innova Market Insights include:

New Discoveries: Adventurous, daring and reimagined flavors emerge as delights for trend-conscious consumers, who enjoy an element of surprise on their palate. Modern consumers are getting used to the idea that the world is at their fingertips, thanks to modern technologies and social media. This mindset is driving consumer appetite for new experiences.

The connected world has led consumers of all ages to become more knowledgeable of other cultures, contributing to 35 percent growth of a discovery claim in 2017 from 2016 (Discovery claims include: discover, explore, uncover, unveil and unravel). 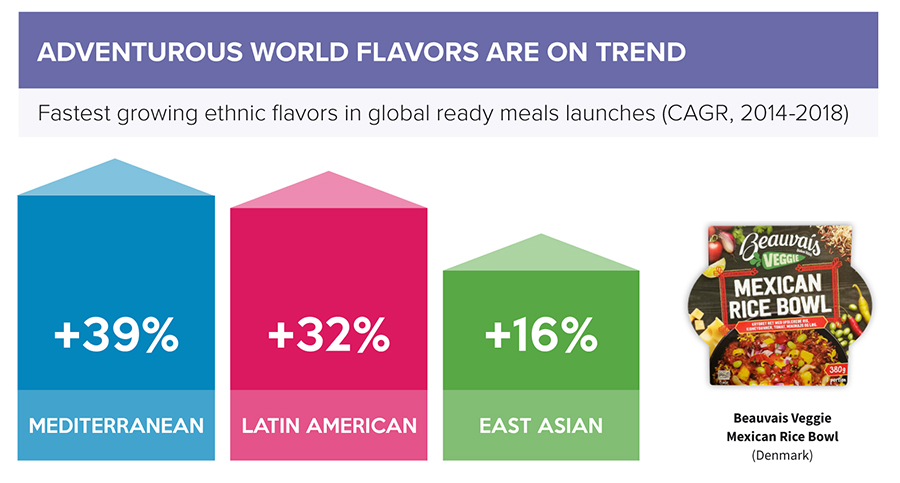 Sensational Concepts: Brands are leaning towards remarkable flavor hybrids and those with emphasis on taste experiences (hot, sweet, savory etc.). Sour is also surging in NPD and can provide a functional kick.

Consumers are looking to food and beverages that offer an interesting experience, in line with the idea of discoveries, mentioned above.

"Sensational" concepts can offer intriguing flavor combinations, such as sweet & salty, but also combine products into hybrid concepts. A clear example is Heinz’s Mayochup, a hybrid of mayonnaise and ketchup, which took the internet and social media by storm when it was announced last year.

Sophisticated Touch: Dull flavors are being reinvented. Classic coffee and alcoholic beverage flavors add an extra element of refinement for older consumer preferences. Classic formulations are being given a unique twist to appeal to a younger target market.

Last week, The Coca-Cola Company launched a new coffee-cola hybrid drink. Already available in Asia and Australia and coming to 25 new markets by the end of the year, the drink is called Coffee Cola: a cold-brewed coffee and sweetener is mixed with the classic carbonated drink to create a low-calorie beverage with more caffeine than Coke but less than a traditional black coffee.

For Carolyn Chen, Marketing Manager, Flavor at Takasago, US consumers, particularly the younger generations, are exposing themselves to authentic ethnic cuisines as there is a growing interest in new and exotic eating experiences and flavors. “Global cuisines introduce consumers to regional spices, herbs, fruits, or vegetables. Global cuisines range from savory dishes, exotic beverages and decadent desserts. Flavor inspirations are predicted to be drawn from authentic Japanese, Korean, Filipino, African and Middle Eastern cuisines,” she notes.

“Another trend is street flavors – inspired by food truck cultures. More retail products and restaurants are highlighting ethnic flavors or street flavors. This will appeal to the ever-growing adventurous consumers. As a global company, Japan-based Takasago is well versed in an array of ethnic flavors that work in all application types,” Chen adds.

Bitter is Back: The health halo associated with bitter tastes is inspiring creative NPD as innovators seek to “green up” their portfolios. Sweet flavors are taking a back seat and bitter tastes are taking over as consumers increasingly turn towards “greener” and “healthier” food choices.

Celery juice is gaining attention on social media for its health benefits, as vegetable-based beverage become increasingly on-trend. Mixologists are also using more bitter ingredients including aquafaba (a vegan foam made from the discarded water from chickpeas) in cocktails to excite consumers with unexpected textures.

Floral flavors are also thriving. One in two US consumers associate herbal flavored beverages with health (Innova Market Insights consumer survey, 2018). This market environment has lead to twice as many new food & beverages launches with floral flavors being reported in 2018 than in 2016 (Global, 2018 vs. 2016).

In December 2018, Firmenich tipped hibiscus as its “flavor of the year” for 2019 based on the growing appeal of florals and botanicals in food and beverages and the growing trend towards consumer curiosity in consumption.

According to data from Innova Market Insights, there has been a 50 percent average annual growth of new product launches tracked with hibiscus flavor (Global, CAGR 2014-2018 YTD), and this trend shows no signs of slowing down.

Fruitful Favorites: The mature fruit flavor category is still at the center of innovation with undiscovered tropical fruits inspiring NPD. Exotic fruit flavors are standing out for their aroma and texture, while fresh and zesty citrus flavors remain on trend.

Earlier this month, UK-based flavors company International Taste Solutions (ITS) pegged fruit flavors as expected to dominate NPD, along with international cuisines and warming spices. “Fruit flavors have also been making their way into products that have historically been the domain of creamy flavors, a good example of this is fruit in coffee flavors,” Adam Day, Head of Sales and Marketing at ITS, tells FoodIngredientsFirst. 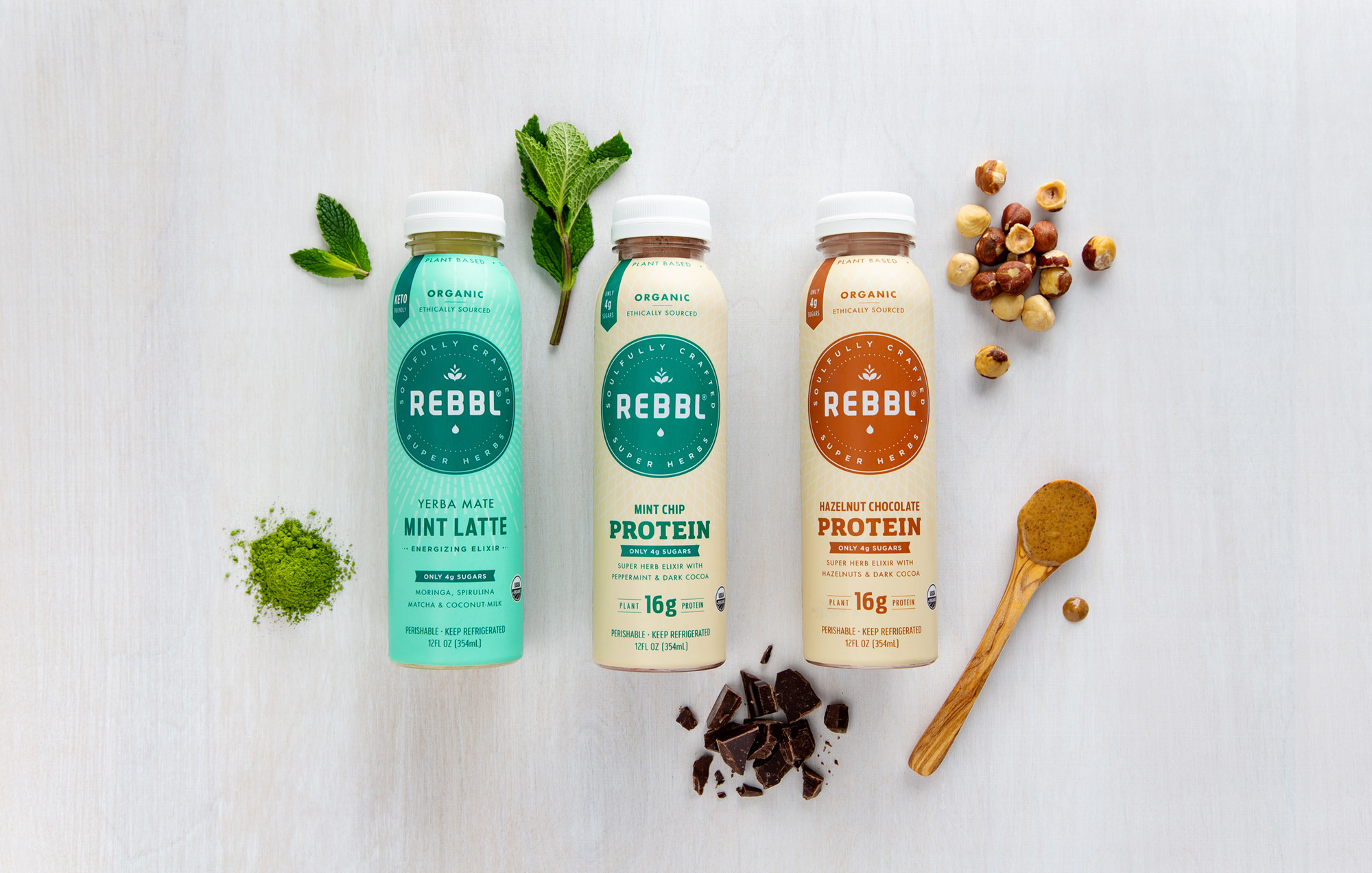 Fruit juices and refreshing fruit-based beverages are another area that drives innovative NPD and has a positive image with consumers. According to research by Innova Market Insights, flavor and health benefits are the most important sales arguments from consumers’ point of view. Fruit juice manufacturers must meet increasing consumer demands and with this in mind. For example, last year, Hydrosol launched all-in compounds which let beverage manufacturers benefit from this growing demand. The company’s Stabifruit systems contain all the important components for making refreshing fruity drinks and offer many advantages over concentrates.

Functionally Flavorful: Consumers demand indulgently healthy products that satisfy the palate while offering functional benefits. Natural processes that bring about flavorful tastes can meet these demands. Kombucha, turmeric and ginger are proving to be particularly popular for both their health and flavor benefits.

The Coca-Cola Company also recently unveiled its first-ever energy drink. Coca-Cola Energy debuted this month in Spain and Hungary before a potential roll-out to other markets. The product contains caffeine from naturally-derived sources, guarana extracts, B vitamins and no taurine. In March, the company launched Odwalla’s Smoobucha in stores across the US, after having unveiled the line of products at Natural Products Expo in California. The beverage fuses smoothies and kombucha – an ancient Chinese fermented tea drink.

Flavor Connections: An increasingly connected world is shaping NPD across the board. Flavors inspired by popular TV shows, trending meals and “Instagrammable” foods are trending. The foodservice sector is picking up on these hypes and retail is expected to be next.

One curious example of this is the case of McDonald’s Szechuan sauce. Once a simple promotional tie-in for the 2018 Disney animated film Mulan, the condiment has been brought back to select McDonald’s restaurants in the US, after the writers of popular cartoon Rick and Morty, who referenced the Szechuan sauce in the show’s third season.

The seemingly forgotten sauce piqued the interest of viewers who quickly turned to social media in an attempt to get the fast-food chain to bring back the sauce. In February, it was announced it would be bringing 20 million packets of Szechuan sauce to restaurants chains in the US.

IFF aims to take ground meat burgers to the next level with its latest ingredient, a plant-based protein based on soy called SUPRO TEX, which is poised to accelerate... Read More