You are in : All News > Enough Food leads EU consortium to scale “largest non-animal protein factory of the decade” 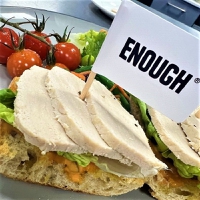 12 Nov 2021 --- Having recently secured EU funding, Plenitude, a group of sustainable food partners led by Enough Food has set out to build a mycoprotein facility in Sas van Gent, in the south of the Netherlands, positioned to hit the highest output of alternative protein among alt-meat ingredient manufacturers this decade.

FoodIngredientsFirst attended an exclusive press briefing organized by Bridge2Food at the campus of Wageningen University & Research, in the Netherlands, to speak to consortium executives about the scale-up and market research surrounding Enough’s Abunda mycoprotein.

“In the case of our fungi-based protein, the question to ask is whether consumers would rather purchase this versus other protein sources. We then set out to find out how to position this novel product,” explains Jim Laird, CEO of Enough.

Abunda is touted for its versatility across a range of applications. (Credit: Enough Food)“Consumer research is done by IFF, while Wageningen is doing development work to test the nutritional values of mycoprotein and how it can be turned into meat analogs.”

Industry titans link up
The new plant, which has been in development over the last two years, is touted for its circularity. The factory is fed agricultural byproducts from a connecting Cargill factory, from which starch is extracted and turned into sugar.

This sugar is fed into the mycoprotein production chain, based on fungi fermentation. The byproducts of making the fungi are then utilized into the bioethanol plant, further closing the circular chain.

“We responded to an EU grant application in 2018 and helped pull together this project of ten partners. The EU enabled the creation of new bio-based products, which is the core focus of the project. Our partners along the consortium value chain include Cargill, who is our primary processor that converts grain into sugar, which is fed into the mycoprotein factory,” Laird details.

“We pass this mycoprotein along to customers such as Europe’s largest beef processor Anglo Beef Processors, which is interested in creating new types of hybrid products and pet food, and plant-based brand Vivera and cell-based meat company Mosa Meat.”

“Wageningen University provides essential inputs along every step of the journey, while IFF gathers fundamental insights on the food industry as one among industry’s largest flavor companies,” he adds.

Pathway to commercialization
Abunda notably has a range of versatile applications. “It is high in protein and fiber, which tastes good. Conceptually, you could take the same thing and make bioleather,” says Laird.

Fermented protein from fungi has a 40-year history of safe use in the European market. (Credit: Enough Food)During the press briefing, Enough served samples of its mycoprotein-based chicken cutlet, which offers an authentic grilling characteristic while imitating the organoleptic properties of chicken. Mycoprotein is also ideal for fish applications, which offers great category expansion potential as seafood alternatives are trending on the market.

Unilever is among the most notable businesses to leverage Enough’s capabilities to bolster its plant-based R&D. Abunda is pegged as a natural fit for the industry giant’s fast-growing meat-alternative brand, The Vegetarian Butcher, which saw a 70 percent growth last year, uses a diverse blend of plant-based proteins to create meat-like tastes and textures for its wide-ranging portfolio.

“The first job in food development is to make sure the product is safe,” Laird notes. “Fermented protein from fungi has been sold in Europe as a single brand. The reason that Enough chose the path we did is because we are working with an ingredient that has had a 40-year history of safe use.”

“We are therefore getting the benefit of an existing regulatory approval, which in comparison to the case of protein from insects or algae is a much less complicated story.”

Assessing consumer acceptance
Following an in-depth assessment of the consumer acceptance rates for mycoprotein in Europe, the mycoprotein consortium plans to develop concepts based on Abunda to fit local cuisine styles. As a significant trend this year, vegan offerings hitting the market have expanded to new food frontiers such as Middle Eastern meats, Asian satays and the Mediterranean palate.

According to IFF’s research, the UK is a key European market due to the fact Quorn has played a role in exposing British consumers to the mycoprotein concept.

“I don’t think that the commercialization of mycoprotein is a challenge. It’s a bigger hurdle to identify the right product shape and format that will help make this ingredient acceptable,” Jos Muilwijk, global innovation marketing leader at IFF, tells FoodIngredientsFirst.

The consortium plans to develop concepts based on Abunda to fit local cuisine styles. (Credit: Enough Food)Commenting on the potential to expand into other global regions, Muilwijk notes there are certain disparities to take into consideration. For instance, the Asian market is completely different from Europe because of the fact that soy is prominently established in products like tofu and tempeh.

“The opportunity for plant-based products in Asia is highest in convenience-styled products like burgers and chicken nuggets, which are a lot more related to fast food,” he adds.

Over the past few months, the region’s local food scene has been revitalized with fresh plant-based introductions inspiring new iterations of traditional cuisine staples.

Tokyo-based Next Meat, for instance, has unveiled vegan Japanese yakiniku grilled meat in Singapore, while peanut-based chicken from Haofood debuted in Chinese and Indonesian recipes through various partnerships in Shanghainese foodservice.

Complementing, not competing
Being primarily a B2B project, Enough’s CEO maintains the consortium is not out to compete with Quorn, which directly targets consumers in the category of finished meat alternative products based on mycoprotein.

“We don’t generally think we are competing with soy and pea, as we believe industry can benefit from a broad range of protein ingredients to best suit a wider variety of animal meat alternatives,” says Laird.

“At a time when consumers are demanding not only more sustainable foods, but healthy foods as well, fermented whole foods like mycoprotein are almost uniquely positioned to offer both. Short ingredient lists, simple processes and nutritious foods are created with ABUNDA, as well as being up to 20 times more sustainable than the animal alternative.”