You are in : All News > De-escalating trade tensions: China to purchase up to US$50bn of US agricultural goods over the next two years

De-escalating trade tensions: China to purchase up to US$50bn of US agricultural goods over the next two years 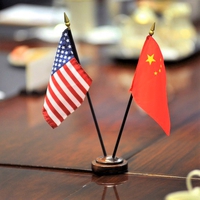 20 Dec 2019 --- The US and China have set out terms for a “historic and enforceable” agreement on a “Phase One” interim trade deal that ostensibly would roll back tariffs and re-open the lucrative Chinese market for US agriculture. Given the reinvigorated trade climate, Chinese purchases of US agricultural goods are expected to hit US$40 to 50 billion over the next two years, according to Robert Lighthizer, United State Trade Representative (USTR). These figures are notably higher than the US$8.6 billion the country bought last year and double what it bought in 2017 prior to the trade dispute.

“We’re pleased with what appears to be progress and look forward to seeing the details of the agreement. US pork producers have been harmed financially by the trade dispute with China. According to Iowa State University economist Dermot Hayes, US pork producers have lost US$8 per hog, or US$1 billion on an annualized industry-wide basis,” Rachel Gantz, Communications Director at the National Pork Producers Council (NPPC), tells FoodIngredientsFirst.

“If the US gained unrestricted access to the Chinese market, it would over the next decade reduce the overall trade deficit with China by nearly six percent, generate 184,000 new US jobs and produce US$24.5 billion in new sales,” she adds.

Prior to the trade conflict, China was prominently the US’ second-largest export market. While the US is currently engaged in agricultural exports to a wide variety of countries, it would arguably take many of these smaller markets to add up to the size of the Chinese economy. As such, reinstigating a trade deal is advocated by many businesses across the US agri-food sector seeking to expand their horizon of export opportunities.

The US wheat sector has adjunctly welcomed the deal. Earlier this year, China agreed to new policies related to agricultural tariff rate quotas (TRQ), including a 9.6 million metric ton reduced tariff TRQ for wheat imports. China had imported as much as 1.65 million metric tons of US wheat in marketing year 2016/17 and an additional 866,000 metric tons in 2017/18 before implementing retaliatory tariffs in March 2018.

“Even though China has huge domestic wheat stocks, they were buying more US wheat because they need it to meet the growing demand there for higher quality wheat foods, until their government retaliated against US tariffs on Chinese goods. So, we hope the new purchases signal a potential turn-around,” says Vince Peterson, President of US Wheat Associates (USW), an organization funded by farmers and the US government to promote wheat exports.

Over the year, US-China trade relations have continued to soften significantly. In November, China made a decision to lift its four-year ban on poultry imports from the US, signaling new trade opportunities for North American chicken. The ban was first enforced by China in 2015 following an outbreak of avian influenza, which has since been the focal point of trade negotiations between Beijing and Washington DC. The announcement came at the heels of a protein shortage in China resulting from African swine fever, which has led to the culling of millions of hogs in the past year.

Expanding US export horizons
In August, the US and EU signed a deal in Washington reviewing the functioning of an existing quota to import hormone-free beef into the EU. The agreement is fully in line with World Trade Organization (WTO) rules and establishes that 35,000 metric tons, out of an allotted tariff-rate quota of 45,000 metric tonswill now be allocated to the US, phased over a seven year period. The remaining amount will be left available for all other exporters.

The signing of the US-EU agreement has been welcomed by US Secretary of Agriculture Sonny Perdue. “Getting more US beef into the EU market is yet another example of expanding markets around the globe for our agriculture producers,” he says. “I have no doubt that when given the opportunity to purchase US products, we will see more Europeans choose to buy US American beef/products,” he says.

In other significant moves, the US and Japan reached an agreement on a trade deal last September, through which Japan will eliminate or lower tariffs for certain US agricultural products. For other traded crops, Japan will provide preferential US-specific quotas. The USTR stated that once the agreement is implemented, over 90 percent of US food and agricultural products imported into Japan will either be duty-free or will receive preferential tariff access.

Key players in the US farming industry have spoken out in favor of the new trade agreement, with the US pork sector voicing its support of the agreement. “Japan is US pork’s largest export market by value. However, US pork has recently seen an erosion of Japanese market share. This is a result of new trade agreements formed by Japan with the EU and the signatory nations to the Comprehensive and Progressive Agreement for Trans-Pacific Partnership [CPTPP] trade agreement, which does not include the US,” a spokesperson of NPPC tells FoodIngredientsFirst.

04 Aug 2021 --- Danone and biosciences company Brightseed – creator of the AI software Forager that maps and predicts the health impact of plant-based compounds – have... Read More

Half of US consumers increased whole grain intake in past 5 years, survey reveals

29 Jul 2021 --- US consumers are eating more whole grains for their perceived health benefits, flavor and sustainability credentials, according to a recent survey of 1,505... Read More