You are in : All News > Chlorinated chicken concerns “not necessary” says US poultry industry as it eyes post-Brexit opportunities

09 Oct 2019 --- The UK’s departure from strict EU legislation regarding poultry could present a lucrative trade opportunity for US exports. However, overcoming negative perceptions surrounding chlorinated chicken and its usage rate will be crucial to succeeding. This is according to Greg D. Tyler, Senior Vice President of the USA Poultry and Egg Export Council, who spoke to FoodIngredientsFirst from the floor of Anuga 2019 in Cologne, Germany. He also argues that there is space in the industry for both animal-derived and plant-based products, which was evident at the show as companies in the animal industry increasingly diversify their products to include plant-based offerings.

The Council also has an eye on the potential market of the UK following Brexit. “We’re holding out some hope about the UK being a potential market post-Brexit, but we’re not sure about it right now. We’ll see how the negotiations progress. If we can get access to the market, we’d love to supply some US chicken to UK consumers,” says Tyler.

However, a key challenge to entering the UK market would be overcoming fears about chlorinated chicken. Washing chicken with chlorine has been banned in the EU since 1997, due to food safety concerns. The EU’s issue is not the consumption of chlorine itself, but that such a practice could mask poor hygiene standards, such as dirty abattoirs. Britain and Ireland’s largest union, Unite, recently warned that public health standards could be compromised if this chicken was allowed to be sold in the UK. 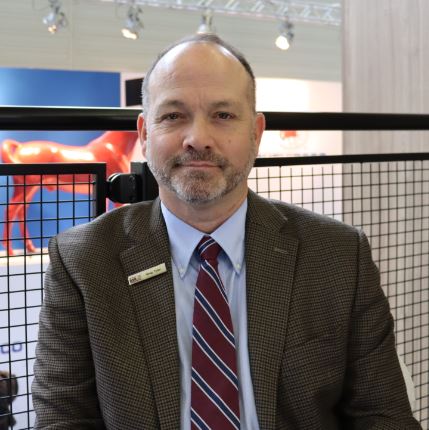 Greg D. Tyler, Senior Vice President of the USA Poultry and Egg Export Council.“However, the US has moved away from chlorination and only a small percentage of US producers still use that. We produce high quality and safe products to export markets worldwide. In the US, we eat what we export, so it’s not like we are just exporting any leftover items,” adds Tyler.

He also highlights that the low production costs in the US are due to competitive labor costs and US-produced feed grains for the poultry industry to consume. “All of those factors combined mean that we can produce a product at a very low cost.” He adds that the biggest competitor in the world market at the moment is Brazil.

Critically, the organization was in Germany promoting its products to those present from non-European markets. This is due to EU-legislation restricting the import of US eggs and poultry. “For us, this show is not about Europe and is instead about the Middle East, Asia, Africa and Latin America. We also can export into the Balkan areas – Macedonia, Albania and Kosovo.”

Tyler also spoke about the opportunities for businesses to tap into the plant-based trend, which continues to boom. Once thought of perhaps a counter-intuitive move for meat and animal-based companies, diversifying into the “green appeal” of plant-based products is becoming increasingly popular among traditional meat manufacturers.

“The plant-based trend is not a threat as there is room for everybody out there,” adds Tyler. “Some consumers want plant-based products, so it’s great that we can provide products that they can consume. However, there are still consumers out there who prefer the ‘real stuff’ over the plant-based varieties.”

He notes that animal welfare should not be a concern for consumers as the US is addressing cage size in the egg industry. “Meanwhile, in the boiler industry, we have controlled environments – large houses for grow-out operations. The chickens are well taken care of and are given an environment they can roam around, while at the same time, they are protected from the outside environment and diseases such as avian influenza.”

Ingredients company ADM Wild was also highlighting its capabilities in assisting food manufacturers who want to take a bite out of the growing meat-alternatives market. Speaking to FoodIngredientsFirst, Jochen Heininger, Vice-President Marketing, spotlighted the growth of the market, and how customer requests in this domain have seen double-digit growth. Although the meat alternatives market only accounts for 2 percent of the total meat market, it is showing huge growth rates of 15 percent per year, says Heininger.

Flexitarian animal companies
Meanwhile, dairy company Elsdorfer and fish supplier Followfood – both Germany-based – have diversified their ranges to offer plant-based options. “We see a great tendency toward plant-based products, with consumers seeking healthier nutrition, as well as sustainability. While vegans are still a small target group, flexitarians are our primary goal,” says Holger Battling, Managing Director at Elsdorfer. The company is currently developing a soy-based yogurt to appeal to this crowd.

Followfood got its start as Followfish over a decade ago. The company pioneered a tracking code on its fish products to ensure traceability. By entering the packaging’s unique code online, consumers can view information such as catch method, date, and even the name of the boat. The company has now diversified its range to include vegetables and wine. It also sells pizza, including a plant-based variety. Followfood got its start as a fish company but has expanded into plant-based pizzas.

“Our clients are often families. You might have a vegan in the same household as someone who loves tuna,” says Stefanie Ruhe, Sales at Followfood. This highlights how diversification allows the products to appeal to a wider range. The company is primarily targeting people aged between 25 and 40 who are interested in sustainable and organic products.

However, Ruhe does note that the pizzas do not allow the same level of traceability as fish due to an increased number of ingredients. For example, the sauce alone contains tomatoes, onions and various seasonings. The spices are only traceable to the country of origin. While the company is not yet using blockchain technology, it is partnering with some satellite data from the fisheries to continue improving its tracking.

The ocean constitutes the world’s seventh-largest economy but is currently under threat from government subsidies, according to campaigners including Sir David Attenborough, WWF, the UN Secretary General’s Special Envoy for the Ocean and the Friends of Ocean Action. The public pays an estimated US$22 billion a year in subsidies that threaten fish stocks, food security, ocean sustainability and fishing livelihoods.

Earlier this month, Ahold Delhaize, Metro AG and New England Seafood International initiated the foundation of the Global Tuna Alliance, an independent group of retailers and supply chain companies setting out to eradicate illegal fishing from the tuna sector. It is estimated that the total volume of tuna currently involved in illegal, unreported and unregulated (IUU) activity in the Pacific is 306.440 metric tons, with a market value of over US$616 million.

By Katherine Durrell, with additional reporting by Kristiana Lalou

After a year in development, Lallemand Bio-Ingredients has unveiled a new range of yeast-based flavors for the meat and plant-based protein markets. Savor-Lyfe P series... Read More

Limagrain Ingredients has unveiled it’s range of extruded pulses, Pep’s Balls, to keep up with the market demand for plant-based ingredients that satisfy... Read More

Royal Avebe, a Dutch cooperative of starch-potato growers, is tapping into the growing demand for potato protein ingredients as the plant-based sector continues to... Read More