You are in : All News > Redefining Consumer Values 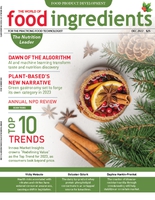 08 Dec 2022 --- Motif FoodWorks is suing California start-up Impossible Foods over four additional US patents held by the latter centered around the flavor and aroma profiles of plant-based foods. The Boston-based meat-alternative manufacturer has opposed the patents on the grounds that they could limit competition and stifle innovation.

This latest action follows yesterday’s preliminary decision to revoke a critical Impossible patent in the European Union by the Opposition Division of the European Patent Office (EPO) – a decision which Impossible has appealed.

Motif believes its challenge in the US is timely since the recently “overturned” patent shares similarities with the US equivalent.

The EU patent challenge is not the first conflict between the companies. Earlier this year, Motif challenged the validity of four of Impossible’s US patents relating to the generation of flavors and aromas in meat-alternative products that contain heme proteins, sugars and sulfur compounds.

FoodIngredientsFirst talks to both parties involved about the dispute.

Impossible and Motif are embroiled in an expanding meat-alternative patent battle.Battle lines drawn
Motif stipulates that these four latest patent challenges, which it claims have been used to develop the taste and smell of meat and meat alternatives for decades, were filed by Impossible to hinder competition.

“Motif believes Impossible’s suit is a legally and factually baseless attempt to stifle innovation and limit consumer choice to preserve Impossible’s profits. The challenges are known as an “Inter-parties review,” which allows Motif to ask a panel of judges from the US Patent and Trademark Office (USPTO) to review Impossible’s asserted patent directed to beef replicas. We hope that the USPTO will reject and revoke Impossible’s patents,” the Motif spokesperson elaborates.

“We agree with the European Patent Office’s ruling that Impossible’s patent is obvious and look at it as a win for the industry – and a sign of things to come,” adds Michael Leonard, CEO of Motif FoodWorks.

“Simultaneously, we continue to challenge additional Impossible patents in the US that also limit plant-based innovation and consumer choice.”

A spokesperson for Impossible responded to the European patent ruling.

“The European Patent Opposition Board review compared Impossible’s patent against our prior invention. Their preliminary decision did not find that Impossible’s inventions are not novel,” they state.

“We have a robust patent portfolio in Europe, which extends beyond this patent, and we look forward to launching our full suite of products there. Our growth plans haven’t changed – in the US or globally – for our expanding portfolio of leading plant-based products, as we’re confident in the strength of our patent portfolio.”

Impossible is showing confidence in the face of this challenge.

“We’re also optimistic that the Boards of Appeal will review and overturn this preliminary decision following our appeal. In the meantime, our patent remains fully enforceable,” says the spokesperson.

The legal actions began this year in March when Impossible sued Motif for “stealing” its technology.

In March of this year, Impossible sued Motif, claiming Motif had violated one of its patents, which covers the use of heme in plant-based meat products.

Motif responded strongly to this claim. “Motif has vigorously fought this claim, arguing that the ingredients that Impossible claims to have ‘discovered’ have existed and been sold in everyday food products for decades and that the claims are a legally and factually baseless attempt to stifle innovation and limit consumer choice to preserve their own profits,” the company said.

However, the spokesperson from Impossible vigorously contests this.

“We have always welcomed and embraced competition, but Motif has not invented or created anything, and we do not tolerate theft of our technology,” they say.

“Motif has tried repeatedly to avoid accountability for its theft by attempting to have Impossible’s lawsuit dismissed, delayed and petitioning for our patent to be reviewed and revoked.”

“Both the District Court and the Patent Office have rejected Motif’s requests. The case is proceeding, and Motif can no longer skirt accountability for its theft of our technology. We remain wholly confident in our position and are confident that Motif will be held accountable.”

Impossible’s case against Motif
The spokesperson for Impossible outlines why the company is confident Motif’s challenges will fail.

“Our case against Motif in the US includes seven patents in total. Motif has already failed in its attempt to challenge one out of the seven patents at the US Patent Office, which found that Motif’s arguments were not reasonably likely to invalidate Impossible’s patent, and therefore declined to review that patent,” they explain.

“Motif now claims that it has challenged four more out of the seven asserted Impossible patents. To the extent that Motif actually files them, we are confident that they will fail.”

Impossible takes the stance that Motif’s attacks are anticipated and harmless.

“We always expected Motif to challenge the other patents asserted in our lawsuit, and we expect their arguments likewise to be weak and not result in any patent office proceeding,” underlines the spokesperson.

“Motif’s partial, belated, weak attempts to challenge our patents contradict its claims that our patents should not have been granted. Our patents were legally issued and are strong. We will hold Motif accountable for its theft of our technology.”

However, Motif says it will stand firm in the face of this conflict.

“While the US patent office declined to review the patent in question on Motif’s first attempt, the company intends to continue challenging it at the patent office, and the parallel lawsuit is expected to go before a jury in a Delaware court,” it says.

US conflict spills over into Europe
This latest development marks a fresh renewal of this conflict between two leading producers, although now within a European theater. Impossible is keen to establish that yesterday’s EPO ruling will not impact its US patent or Europe growth plans.

“Our plans in Europe haven’t changed, and we look forward to launching our full suite of products there. This decision does not impact the validity or strength of Impossible’s US patents.”

Moreover, Impossible remains confident that its European patent is secure.

Following its acquisition of Meatless earlier this year, ingredient player Beneo is showcasing its latest meat alternative offering of plant-based chicken chunks at this... Read More

Fuelling the future: Meal replacements set to shake up 2023

Post-pandemic, consumers are looking to find meal solutions that will fulfill their nutritional needs while also not taking too much time from their busy lives. As such,... Read More

As the food industry attempts to solve the modern problems of sustainable food production, leaders, manufacturers and scientists are turning toward an equally modern... Read More