You are in : All News > Back of the Yards Algae Sciences to scale biobased microalgae and mycelia ingredients 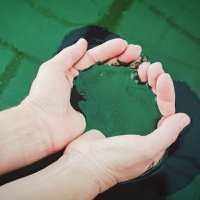 Financial terms of the new investment have not been disclosed.

“Through this alliance, DIC and BYAS will share algae mass-culture technology and functional component extraction technology – that DIC has long-cultivated in the spirulina business – to develop new products, further improve production efficiency, reduce waste and improve sustainability through the more-effective use of natural resources,” DIC states.

Burger patties made with spirulina-based heme (Credit: BYAS).Opportunities in plant-based arena
The best known plant-based heme analog on the market is leghemoglobin, produced by Impossible Foods through an insertion of DNA from soy plants into genetically engineered yeast. This yeast is fermented – in a similar way beer is made – to produce heme.

As Impossible Foods’ heme is not on the market as a standalone ingredient, BYAS has targets to become a large-scale supplier to other producers seeking to branch out selections along the dynamic plant-based aisle.

The BYAS heme analog is produced from organic spirulina and is non-GMO. The heme analog was discovered during the company’s food colorant research, where one of its extracts was observed to have a strong “meaty odor”.

Besides conferring a natural umami and meaty taste, the BYAS algal heme analog browns when heated and can be used to give plant-based meat a gradation of color when grilled similar to animal-based meat.

Of particular interest from a sustainability perspective is the fact that the BYAS heme analog can be combined with other BYAS extracts – such as the company’s F602 spirulina, chlorella, wheatgrass and mushroom extract – to improve the organoleptic properties of plant-based meat.

Furthering the spirulina ingredient pipeline
The microalgae market is expected to be worth US$1.8 billion by 2028 and record a compound growth rate (CAGR) of 10.3% for the same timeframe, according to forecasts.

Since becoming the first company in the world to successfully commercialize spirulina production in the 1970s, the DIC Group has been scaling its research in finding safe ways to use spirulina powders.

In collaboration with US-based Sun Chemical Corporation – a DIC Group member company operating in the US and Europe – DIC plans to expand product sales globally while developing new applications.

This progress builds on developments across the sector over the past year. In one instance, researchers have developed high-protein microalgae strains with improved taste, upscaled as part of the EU-funded project ProFuture. In other moves, Israeli marine ingredient start-up Yemoja unveiled its red microalgae “Ounje” to infuse bloody juiciness to plant-based burgers and steaks for an authentic medium-rare experience.