You are in : All News > Automated harvesting: “Vegebot” designed to streamline farming and cut labor costs

15 Jul 2019 --- A vegetable-picking robot equipped with machine learning to identify and harvest a “commonplace, but challenging” agricultural crop has been developed by engineers at the University of Cambridge, UK. Dubbed the “Vegebot,” the automated harvester was initially programmed to recognize and harvest iceberg lettuce in a lab setting. The technology has now been successfully applied in a variety of field conditions in cooperation with G’s Growers, a local fruit and vegetable co-operative.

The researchers stress a growing need for crops that are planted, weeded and harvested with decreased direct human involvement, which in turn can reduce labor costs and improve yield. Increasingly, fully and partially automated systems are proving their worth in agriculture, particularly in the context of labor shortages such as those spurred by the UK leaving the EU. 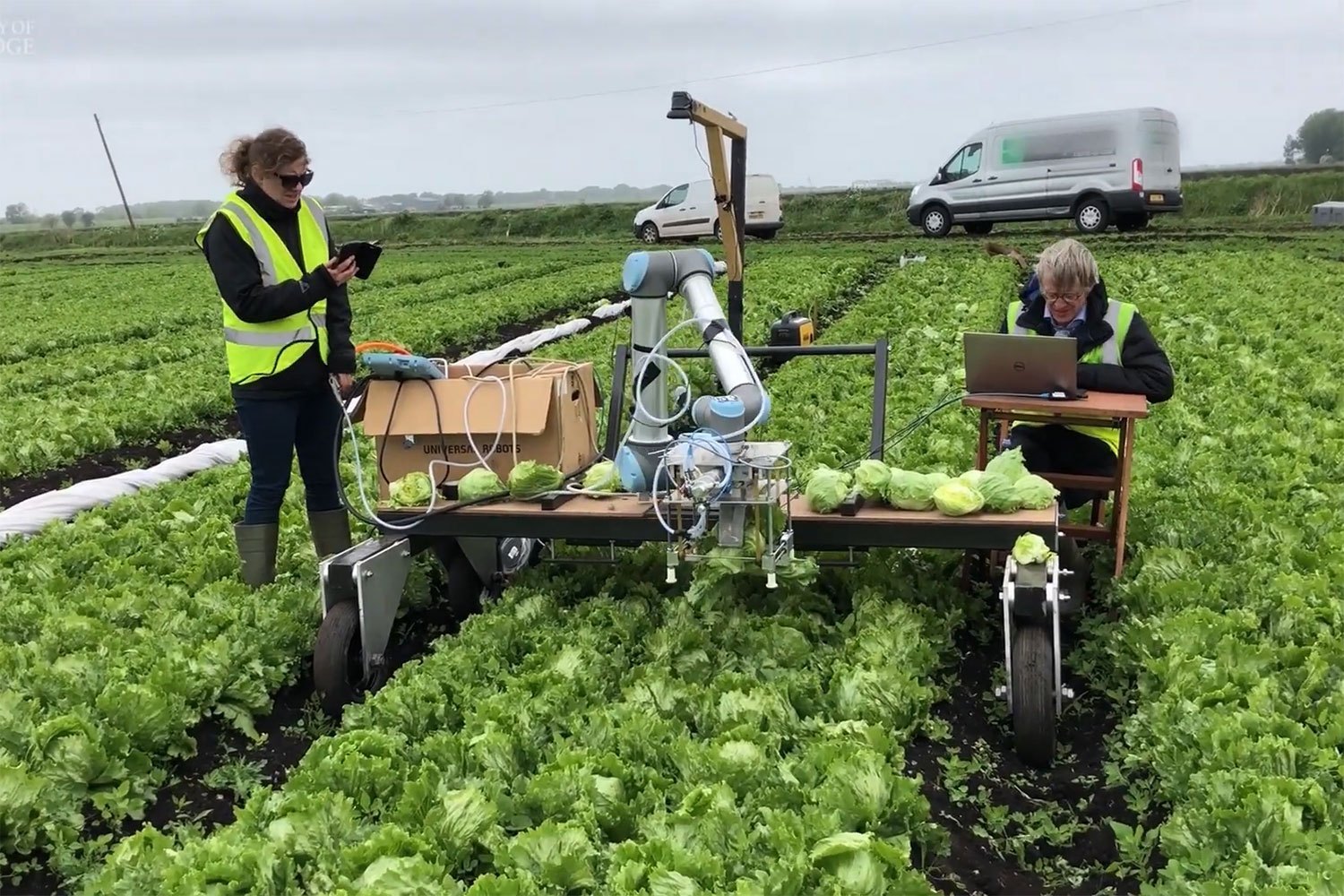 Vegebot can be tailored to harvest different crop varieties.“Every field is different, every lettuce is different,” explains co-author Simon Birrell from Cambridge’s Department of Engineering. “But if we can make a robotic harvester work with iceberg lettuce, we could also make it work with many other crops.”

Crops such as potatoes and wheat have been harvested mechanically at scale for decades, but many other crops have to date resisted automation, the researchers outline. Iceberg lettuce is one such crop. Although it is the most common type of lettuce grown in the UK, iceberg is easily damaged and grows relatively flat to the ground, presenting a challenge for robotic harvesters.

“At the moment, harvesting is the only part of the lettuce life cycle that is done manually, and it’s very physically demanding,” says co-author Julia Cai, who worked on the computer vision components of the Vegebot as an undergraduate student.

In addition to addressing labor shortages in agriculture, robotic harvesters can potentially help deal with food waste, the researchers assert. At the moment, each field is typically harvested once, and any unripe vegetables or fruits are discarded. However, while harvesting around the clock, a robotic harvester trained to pick only ripe vegetables can perform multiple passes on the same field, returning at a later date to harvest the vegetables that were unripe during previous passes.

Putting Vegebot to work
The Vegebot has two main components that work towards efficiency: a computer vision system and a cutting system. Initially, the overhead camera on the Vegebot captures an image of the lettuce field and identifies all the lettuces in the image. The 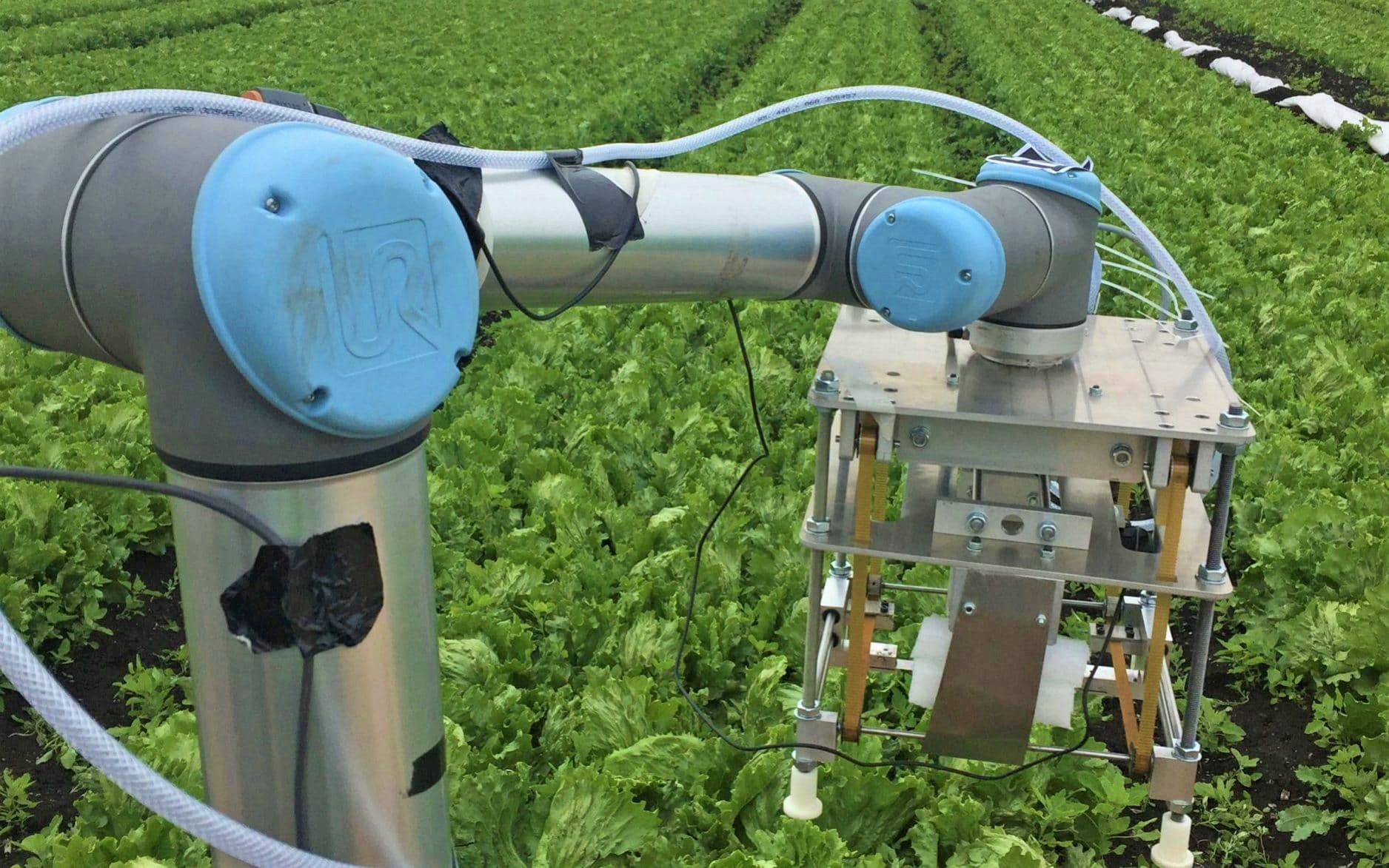 The researchers developed and programmed a machine learning algorithm on images of lettuce.software then classifies for each lettuce, whether it should be harvested or not. A lettuce might be rejected because it is not yet mature, or because it has a disease that could spread to other lettuces in the harvest.

When the Vegebot first identifies a “targeted” crop within its field of vision, it then determines whether a particular lettuce is healthy and ready to be harvested, and finally cuts the lettuce head from the rest of the plant without crushing it, so that it is “supermarket ready.” “For a human, the entire process takes a couple of seconds, but it's a really challenging problem for a robot,” says co-author Josie Hughes.

The researchers developed and programmed a machine learning algorithm on images of lettuce. Once the Vegebot was able to accurately recognize healthy lettuces in the lab, researchers then tested the technology in a field setting, in a variety of weather conditions, on thousands of real lettuces.

A second camera on the Vegebot is positioned near the cutting blade, which helps ensure a smooth cut. The researchers were able to adjust the pressure in the robot’s gripping arm so that it held the lettuce firmly enough not to drop it, but not so firm as to crush it. The force of the grip can be adjusted for other varieties of crop.

“We wanted to develop approaches that weren’t necessarily specific to iceberg lettuce, so that they can be used for other types of above-ground crops,” says Lida, who leads the team behind the research.

“We’re also collecting lots of data about lettuce, which could be used to improve efficiency, such as which fields have the highest yields,” says Hughes. “We've still got to speed our Vegebot up to the point where it could compete with a human, but we think robots have lots of potential in agri-tech.”

Although the prototype is nowhere near as fast or efficient as a human worker, it demonstrates how the use of robotics in agriculture might be expanded, even for crops like iceberg lettuce which are particularly challenging to harvest mechanically, the researchers note. Results of the study have been published in The Journal of Field Robotics.

The way forward is paved with innovation
From robotic harvesting practices to AI-powered smart supply chain digitization, the farming industry has seen a boom in technological advancements that are propelling agricultural efficiencies. The movement is enjoying a boost from small and established players working hand in hand through innovative collaborations. Earlier this month, in a bid to improve the efficiency and sustainability of the European food industry, thirteen partners, including the Danish Food Cluster, joined forces in the S3FOOD project. The initiative will supply €3.9 million to help small and medium enterprises (SMEs) in the industry make better use of digital technology for smarter food production.

Also this month, dairy cooperative Arla UK introduced, under its “360” scheme, the use of Herdvision’s 3D imagery systems to identify changes in physical wellbeing, mobility and weight in cows. An integrated use of visual monitoring, data recording and artificial intelligence (AI) is expected to remove human subjectivity in screening of cow health. The automation of monitoring body conditioning, mobility and herd health could become a key element to Arla’s “Happy Cow” standard if the trial is successful, as envisioned by the company.

And last February, Russian modular automated farms start-up iFarm Project received a US$1m investment, which will be partly used to expand its reach and fund a pilot project in Europe. iFarm Project has created technology allows for the year-round production of vegetables, salads and berries via automated vertical farming greenhouses. The company says it seeks to promote urban crop production through its “easy-to-use plug-and-play modules” and is mainly aimed at small and medium enterprises.