You are in : All News > Asian and US consumers are prepared to ride the next wave of alternative seafood, GFI highlights 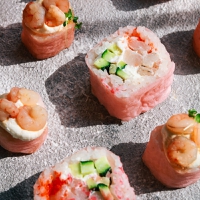 30 Aug 2022 --- There is new evidence that consumers across Japan, Thailand, Singapore, South Korea and further in the US are growing accustomed to the novel food types of plant-based and cultivated seafood from cells. Alternative seafood – a small but growing industry – has the potential to play a major role in satisfying global seafood demand if products can appeal to consumers’ palates and wallets.

The second and most recent study, conducted this year, focused on Japan, Singapore, South Korea and Thailand – four countries that are both high consumers of conventional seafood and regional hubs for food-tech innovation.

Bluu Seafood is preparing to launch cell-based sashimi in Singapore (Credit: Bluu Seafood).“Even as the world’s appetite for protein continues to soar, worldwide per capita fish consumption is now projected to slow by 2030 as demand outpaces supply in many key markets,” she warns.

While concern about taste was a leading barrier in all countries, lack of availability and concerns around the naturalness and freshness of products were also leading barriers.

In the four Asian countries, guaranteed lack of mercury and other heavy metal contamination were the second leading drivers of alternative seafood consumption, after good flavor.

CellMEAT is bringing the first cell-based shrimp product to South Korea (Credit: CellMEAT).Consumers are receptive, but more education is needed
Respondents were divided into two groups—plant-based and cultivated—and were provided with a brief explanation of the technology. Participants in Thailand consistently found alternative seafood the most appealing and indicated strong future purchase intent.

This is notable, since, many Thai consumers have historically preferred to purchase fish at a wet market rather than supermarket, so that they can find the “freshest” fish by looking at various characteristics – such as eye color and smell ⁠ – a traditional practice that is challenging to replicate with alternative seafood.

Singaporeans were found to value fresh seafood over processed or value-added seafood. Not wanting to try something new was the least significant barrier to respondents in Singapore, who are well-known for their eagerness to explore new foods and flavors.

The “Garden City” has been leading the charge in opening regulatory pathways for cell-based products, such as cultivated shrimp and sashimi.

In South Korea – a market that is preparing for its first iterations of cell-based shrimp – regulation could play a role in mitigating local consumers’ lack of trust in cultivated seafood. Earlier this month, South Korea announced that its national plan will outline a path to evaluate the safety and manufacturing processes of cultivated meat and seafood.

Meanwhile, the US has a much shorter history with meat alternatives than many Asian countries. Additionally, large portions of the country have limited access to fresh seafood. These factors may explain why US consumers place more importance on taste and texture parity, the GFI researchers explain.

Singapore is leading the charge in opening up regulatory pathways for cell-based seafood, such as cultivated shrimp by Shiok Meats (Credit: Shiok Meats).Tackling the Japanese market
Respondents in Japan were found to have the largest difference between the appeal and future purchase intent of plant-based versus cultivated seafood. Japanese respondents’ leading barrier to consuming cultivated seafood was both a lack of trust and that they had the lowest level of familiarity with all of the plant-based products.

Japanese consumers are known to be health conscious and place importance on products produced in Japan.

“Consumer acceptance research conducted by Japan Finance Corporation in 2021 found that 58% of consumers in their 20s have a clear preference for Japanese-made products, with that percentage progressively increasing with age, reaching 87% of consumers in their 70s,” highlights Yoshitomi Megumi Avigail, PR manager of Japan Association for Cellular Agriculture.

Among older generations, perceptions about healthy food also drive many shopping decisions, which can cut both ways for alternative proteins, he notes. “Some research shows that Japanese consumers are attracted to alternative meat because it’s lower in cholesterol than conventional meat.”

“However, conventional fish is also widely perceived to be a healthy product, thus making alternative fish less attractive than alternative meat. To overcome that obstacle, alternative seafood products need to deliver greater health benefits than older generations are already getting from the fish they know.”

Last June, Japan’s Health, Labor and Welfare Ministry selected a group of researchers to investigate the safety of cultivated meat and seafood, signifying that the country is making progress toward developing a regulatory framework for cultivated proteins, which could help reassure skeptical local consumers.

For a fuller and more accurate picture, these responses must be combined with other findings – such as consumer familiarity and product availability – GFI researchers note. For example, based on the table, launching a cultivated seafood company in Japan “looks relatively unappealing,” according to GFI.