You are in : All News > World Food Prize for Sweet Potato Biofortification Scientists 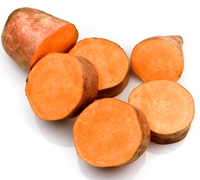 17 Oct 2016 --- The 2016 World Food Prize has been awarded to a team of scientists for their long-term work breeding vitamin-A enriched sweet potatoes in Uganda and Mozambique which will have an impact on the nutrition of millions of people.

The work on the orange-fleshed sweet potato is being hailed as the single most successful example of biofortification and the four scientists have been awarded the 2016 World Food Prize, an award body that has recognizing efforts to increase the quality and quantity of food since the mid-eighties.

Vitamin A deficiency (VAD) limits growth, can cause blindness, weakens immunity, increases the chance of death and is one of the most harmful forms of malnutrition in the developing world affecting more than 140 millions children across 118 nations and is extremely dangerous for pregnant women.

The researchers Drs Maria Andrade, Jan Low and Robert Mwanga, from the CGIAR International Potato Center and Howarth Bouis who founded HarvestPlus at the International Food Policy Research Institute, were awarded the 2016 World Food Prize, during a ceremony recently.

The efforts of the Food Prize Laureates has positively impacted over 10 million people through biofortified crops and will continue to enhance the nutrition and health of several hundred million more in the coming decades.

In 1971, The International Potato Center, CIP, was founded as a root and tuber research-for-development institution that delivers sustainable solutions to the world issues of hunger, poverty and the degradation of natural resources. While working for CIP, Drs. Maria Andrade, Jan Low, and Robert Mwanga undertook a project to develop disease-resistant, drought-tolerant, high yielding varieties of orange-fleshed sweet potato that can flourish in the variable soils and climatic conditions found in Sub-Saharan Africa in an effort counter the effects of Vitamin A deficiency.

Over a 25-year period Bouis pioneered the implementation of a multi-institutional approach to biofortification as a global plant breeding strategy. As a result of his leadership, crops such as iron and zinc fortified beans, rice, wheat and pearl millet, along with Vitamin A-enriched cassava, maize and orange-fleshed sweet potato are being tested or released in over 40 countries.

Bouis created the organization HarvestPlus in 2003 as a global multi-sector, multidisciplinary effort to improve nutrition and public health through biofortification. Under his leadership, a large partnership of plant breeders, agronomists, nutritionists, and economists have worked together to form one of the most successful initiatives to improve nutrition through changes in the food systems.

“At a time when malnutrition, stunting and early childhood death remain a scourge for millions on our planet, the four 2016 World Food Prize Laureates have uplifted the health and well-being of more than 10 million persons through the biofortification of staple crops, particularly the vitamin fortified orange fleshed sweet potato,” Ambassador Kenneth Quinn, president of the World Food Prize said. “They have truly fulfilled the dictum attributed to Hippocrates from almost 2,400 years ago - to “Let Food Be Thy Medicine”.”

The global food import bill is projected to rise by US$51 billion from 2021, of which US$49 billion reflects higher prices, according to a new report released by... Read More

In light of World Hunger Day, DSM has pledged to reach 800 million people with improved nutrition, including fortified staples such as rice, edible oil, flour and public... Read More