26 Aug 2022 --- This week in industry news, Morinaga Milk obtained the US Food and Drug Administration GRAS notification for its probiotic ingredient and Nektium launched an organic version of its elderberry extract. Meanwhile, Nestlé launched its Nestlé Youth Entrepreneurship Platform (YEP) for young innovators. Fonterra is continuing to reduce its carbon footprint with an innovative methane technology targeting net zero by 2050.

In brief: Launches
Morinaga Milk, a Japanese dairy product company, announced its proprietary probiotic Bifidobacterium longum subsp. infantis M-63 has received FDA GRAS (Generally Recognized as Safe) status relating to its use in term infant formula and general foods. In April, the FDA issued the company with a GRAS Notice known as a “no objection letter,” stating it has no questions regarding the safety of the probiotic strain B. infantis M-63 when used in infant formula and general foods. The probiotic strain meets the highest safety and regulatory compliance standards and can be used as an ingredient in powdered infant formula for term infants and certain general foods. 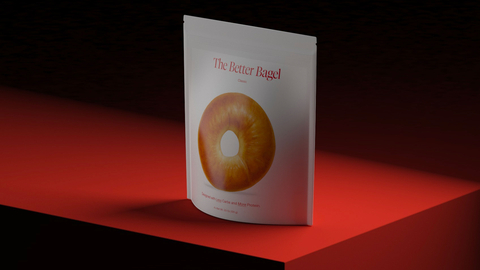 BetterBrand’s ‘The Better Bagel’ transforms the traditional bagel into the net carb equivalent of two banana slices.version of the product. The global market for organic food and drink products is expected to expand at a CAGR of 11% per year, reaching a value of US$220 billion by 2024, while the popularity of organic supplements is also on the rise. Alongside this, demand for elderberry has been growing since the start of the COVID-19 pandemic, with consumers increasingly seeking natural ingredients that have a positive immune effect.

Food tech start-up BetterBrand revealed a global partnership with Whole Foods Market, hitting the frozen shelves of over 500 Whole Foods Market stores one year after its online debut. The company’s first product, “The Better Bagel,” transforms the carb-heavy bagel into the net carb equivalent of two slices of banana while boasting over 25 g of plant-based protein, no added sugar, and a non-GMO Certified, clean label ingredient deck.

In brief: Business moves
As part of its Global Youth Initiative, Nestlé’s YEP was launched; a new digital platform for young innovators and entrepreneurs who want to learn new knowledge and skills, test an idea or grow their businesses in areas ranging from food science and technology to the development of products and services – including regenerative agriculture and sustainable packaging. The platform gives young innovators access to The Nestlé Entrepreneurship Academy plus dedicated programs to grow knowledge, learn new skills and gain experience.

In brief: Sustainability efforts
Fonterra is working on two science-based innovations being touted as “game-changing” for methane, the company’s long-term sustainability goals, and the agricultural sector as a whole New Zealand has one of the lowest greenhouse gas footprints per liter of milk produced worldwide. Fonterra’s New Zealand on-farm carbon footprint is approximately one-third of the global average. While carbon dioxide is the primary driver of climate change, methane contributes significantly to the earth’s temperature rise, the company underscores. Methane reduction is just one of the environmentally sustainable solutions that Fonterra continues to work toward as part of its commitment to sustainable dairying.

A new research study led by the Hebrew University of Jerusalem and Israel’s Agricultural Research Organization (Volcani Institute) detailed the success of a biological sensor for the early detection of hidden disease in potato tubers, one of Israel’s chief export industries at 700,000 metric tons a year. However, some of them carry diseases within – either visibly or invisibly – that cause rot and significantly reduce the potato’s quality. The Hebrew University-Volcani alliance has developed a sensor that detects conditions and can be used to inhibit the rot from growing and spreading. The sensor relies on smart bioengineering and optics.

In brief: Other highlights
Bakkavor Group has won praise from the non-profit Lever Foundation for its latest commitment to source only cage-free eggs and egg ingredients globally. Headquartered in London, the company operates 23 factories in the UK, five in the US and nine in China, with annual sales exceeding US$2.2 billion. Bakkavor specializes in freshly prepared foods such as ready meals, salads, desserts, pizzas and sandwiches, which are sold white label to UK and US retailers and retail and foodservice chains in China. Bakkavor joins a growing number of food businesses that have made commitments to source only cage-free eggs across their global supply chains, including packaged food manufacturers such as Unilever, Danone, Nestle, Kraft and Mondelez, retailers such as Tesco, Costco and Aldi.

Nektium is an innovative botanical ingredients company that discovers, develops and commercializes science-based, branded botanical ingredients. Through the close integration of the departments of R&D, production and QA, Nektium provides seamless research-based solutions to the nutraceutical industry since 1997.

The in-house new product development and innovation team investigates the chemistry, pharmacology and toxicology of traditionally used medicinal plants and carries out discovery and preclinical studies. Randomized controlled clinical trials are carried out in collaboration with CRO´s and renowned University partners to pave the way for innovative botanicals in Nektium´s portfolio:

Zynamite is an award-winning, patented and clinically studied botanical extract for mental and physical energy

Rhodiolife is Nektium´s standardized and clinically studied extract of the adaptogen Rhodiola rosea, wild harvested from the Siberian Altai mountains

Located in Spain, in the heart of the Canary Islands, our state-of-the art technologies combine the best traditional extraction processes, using only pure water and food grade ethanol. Gentle extraction methods, evaporation and separation technologies to concentrate and purify our products, and low temperature spray drying allow us to produce botanical extracts with the best natural phytochemical profiles. We are able to offer the swift, personalized service we pride ourselves on because all departments and manufacturing facilities are under one roof including production, quality assurance, analytical laboratories, and R&D.

With carefully selected raw materials, our internal quality control laboratory performs numerous protocols, procedures and analyses in the production of a single batch to guarantee you the highest quality, natural ingredients.

This week in industry news, Liberation Labs closed a US$20 million seed round of funding to develop alternative proteins at scale. Meanwhile, Olam Group completed a... Read More

Consumer desire to raise and uplift sensory experiences through food and drink will propel impactful innovations in the year ahead, according to Flavorchem, a global... Read More