You are in : All News > UK’s Wicked Foods eyes stateside rollout of plant-based meals, snacks and ingredients next summer 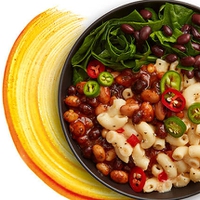 19 Nov 2020 --- Wicked Foods, a UK-based plant-based meals brand, has announced the upcoming launch of its product line in the US, next summer.

The brand was created by chefs Derek and Chad Sarno, who are recognized globally for their forward-thinking approach to chef-driven, plant-based cuisine.

“We’ve created the tools, recipes and products to make it simple, flavorful and fun for people to eat more plant-based foods in the UK, and we’re excited to bring these to the US, Canada and other European countries,” says Derek Sarno.

The expansion to North America joins the unprecedented growth of the global “Plant-Based Revolution.” Innova Market Insights recently pegged “Plant-Forward” as its Top Trend for the coming year.

Wicked offerings
Wicked’s vegan ready-meals and fresh offerings launched with 20 products under the Wicked Kitchen brand in January 2018 at UK supermarket Tesco. Since then Tesco has extended the line to more than 80 products across its stores.

Additionally, the retailer recently announced a five-year commitment to offer even more plant-based foods and to increase sales of meat alternatives by 300 percent.

Innovating with mushroom-based proteins
The Sarno brothers have pioneered techniques utilizing mushrooms as a meat alternative to animal protein.

Click to EnlargeWicked’s vegan ready-meals and fresh offerings launched with 20 products under the Wicked Kitchen brand in January 2018 at Tesco.These techniques, alongside their culinary abilities in plant-based cuisines, are also showcased on their YouTube channel, which has generated more than 2.5 million views.

Wicked Foods’ expansion is being led by its new CEO, Pete Speranza, a Unovis partner, who will oversee the company’s day-to-day operations.

Wicked Foods joins other brands in the portfolio of Unovis, a global investment firm targeting the disruption of conventional animal agriculture.

“Beyond that, it’s not only vegans that are creating demand but also mainstream consumers who want in on alternative protein options that put flavor first,” comments Speranza.

As part of the brand launch, Wicked Foods is asking its followers and anyone wanting to help guide product availability in the US and globally to “plant your flag” and share locations where they would like to find the plant-based products.

28 Jul 2021 --- Nobell Foods, a US-based company cultivating dairy compounds from plants, has netted US$75 million in series B funding. The investment round includes backing from... Read More