You are in : All News > Aleph Farms reveals cell-cultured beef prototype as it edges closer to commercialization

19 Nov 2020 --- Commercialization of Aleph Farm’s cultured steak, grown directly from non-GMO cells of a living cow, is one step closer with the first phase of construction of its BioFarm getting underway. The Israeli start-up is heading toward transferring its thin-cut beef steaks into a proprietary platform suitable for mass cultivation. The food-tech firm will reveal its prototype beef tomorrow during a gastronomical experience to showcase its cooking behavior, texture, taste and slaughter-free steaks’ nutritional qualities.

The cultured steak boasts nutritional, culinary and sensory attributes of meat in terms of texture, flavor and aroma. Didier Toubia, co-founder and CEO, tells FoodIngredientsFirst in an in-depth interview.

The food-tech firm will reveal its prototype beef tomorrow during a gastronomical experience to showcase its cooking behavior, texture, taste and nutritional qualities.

He also explains the company’s proprietary modules for its mass production platform, set to bring the product to cost parity with conventional meat at scale.

“Aleph Farms is not in the race to be first to launch any product but rather focused on getting the product right and on achieving cost-parity for large scale production as we believe those two goals will drive long-term acceptance and impact,” he says.

“We are working hand-in-hand with the existing meat and food industry through an inclusive business model with local partners: offering a new way of producing meat as an extension line to their core business, supporting a smooth integration of slaughter-free meat into the market,” he continues.

“This will not only bring production closer to the consumer and cut food miles, representing the vision for local food systems and resilient communities, but will leverage local supply chains and improve resilience, promote food security and sustainability of operations.”

“People always come to the table with a pinch of skepticism, and this is always followed by amazement and delight. We believe that it is not enough to make a one-size-fits all culinary experience,” he notes.

“This is why our steaks are versatile and reflect the diversity of different food cultures around the world. This includes the Asian culinary cuisine in particular- which will be our inspiration for this Friday.”

The showcase is another milestone for Aleph Farms, which has been making waves in the cultured meat space since it was co-founded in 2017 with the Israeli food-tech incubator “The Kitchen” of Strauss Group, and the Technion – Israel Institute of Technology.

“One of the big challenges of cultivated meat is the ability to produce large quantities efficiently at a cost that can compete with conventional meat industry pricing, without compromising on quality.”

Aleph Farms has developed five technological building blocks that are put into a proprietary large-scale production process, all patented by the company.

“In addition, it validates the feasibility of cultured meat as a quality product: with natural cells and reproducing the experience of a whole piece of meat,” he explains.

“The company has diligently perfected the structural composition of its product so that it embodies the familiar texture, taste, cooking behavior, as well as the nutritional qualities of beef steaks that are derived from animal slaughter.”

In 2018, Aleph Farms reported that one serving of steak cost US$50 to produce. In April, the company completed the design of its first pilot BioFarms. It has now achieved key milestones, including a clear path for decreasing the growth medium cost 500 times at scale.

“As Aleph scales its BioFarms, it will leverage economies of scale, and the cost per steak will reach parity with slaughter-based meat within a few years from full launch- probably quicker than the plant-based meat alternatives,” Toubia goes on.

“Demand for meat is to grow 50 percent by 2040 globally, so the pie’s expanding. We envision that in five to 10 years, we’ll have two categories of real meat: slaughter-based and slaughter-free meats, sharing the same basic attributes but with a slightly different value proposition. The same as white and red wines are two categories of wines with a slightly different value proposition.” 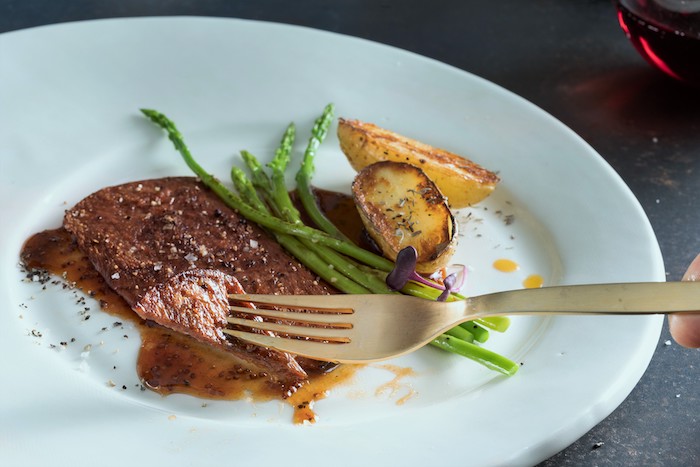 The cultured steak boasts nutritional, culinary and sensory attributes of meat in terms of texture, flavor and aroma.The meat industry is actively looking at cultivated meat as an additional supply of meat and is attracted by its potential advantages.

"In addition, our sustainability goals touch on models for integrating cultivated meat into the farming industry, making sure that we preserve farmhouse prosperity. In the farming industry globally, there is a big issue with aging farmers. We have fewer and fewer farmers and more and more food to produce,” says Toubia.

“Solutions like cultivated meat can, on the one hand, help improve the condition of the farmers if they integrate those higher-value technologies, and on the other hand, can address some demographic challenges relative to the reducing number of farmers in the developed world.”

Making cultured meat widely available
The company beefed-up its proof-of-concept released in 2018, increased the size of its slaughter-free product, and adapted it to fit controlled, automated bioprocesses to ensure economic viability in large-scale production.

The move marks a major leap in Aleph Farms’ goal of making cultivated meat widely available in the global community.

Aleph Farms’ unique platform for cultivating steaks effectively mirrors the natural process of tissue regeneration processes that occur in the animal’s body but outside of it and under controlled conditions.

The process is designed to use a fraction of the resources required for raising an entire animal for meat, and without antibiotics.

To successfully grow whole pieces of meat, compared to minced meat products, the company mimics the extracellular matrix found in animals with a plant-based matrix that enables the cells to grow and form structured tissues of meat.

Its “cell-banks” yield an unlimited source of pluripotent, non-GMO cow cells’ for growing large quantities of meat without the dependency on living animals.

“Aleph Farms is establishing a new category of meat, imbued with its own culture and a new world of meaty experiences,” enthuses Amir Ilan, the company’s resident chef.

“It’s not enough to just make a protein that will fill the nutritional gap; we need to capture the fullness of the meat-eating experience,” adds Toubia.

As a French native with roots in food culture and studying food engineering in Dijon, Toubia brings his appreciation of gastronomic tradition to his unique cultivation technology.

“Meat can be cultivated from cells isolated from different animal breeds, have different cuts, and it elicits different emotions. We see Aleph Farms as crafters of experiences,” Toubia concludes.

This week, consumers are having a taste of the world’s first cultured cuts at a Singaporean butchery’s revamped bistro menu. With its grassroots in Southeast... Read More