You are in : All News > Branson and Gates back lab-grown “clean meat” innovators 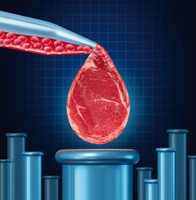 24 Aug 2017 --- Clean meat innovators Memphis Meat has received groundbreaking support from investors, including billionaire entrepreneurs Sir Richard Branson and Bill Gates, as well as one of the world’s largest global agricultural companies, Cargill. Based in the San Francisco Bay Area, Memphis Meats is developing methods to produce meat directly from animal cells, without the need to breed or slaughter animals.

It released the world’s first clean meatball last February and the first-ever clean poultry earlier this year in March and plans to bring real meat to the market that is marketed as significantly better for the environment, animals and public health.

The US startup has raised US$17 million from the high profile investors from a fundraising round which was led by venture capital firm DFJ.

This comes at a time when there is increasing consumer demand for protein that impacts less on the environment and is less reliant on feed, land and water.

Memphis Meats says that it plans to use the funds to continue developing “delicious products” as well as to accelerate its work in scaling up clean meat production, and to reduce production costs to levels comparable to – and ultimately below – conventional meat costs.

The company says it expects to quadruple its headcount and has already begun growing its team of chefs, scientists, creative people and business people.

“We’re going to bring meat to the plate in a more sustainable, affordable and delicious way,” explains Uma Valeti, M.D., co-founder and CEO of Memphis Meats. “The world loves to eat meat, and it is core to many of our cultures and traditions. Meat demand is growing rapidly around the world.”

“We want the world to keep eating what it loves. However, the way conventional meat is produced today creates challenges for the environment, animal welfare and human health. These are problems that everyone wants to solve, and we can solve them by bringing this incredible group of partners under one tent. This group will help us accelerate our progress significantly.”

“Clean meat is an enormous technological shift for humanity and an opportunity to invest in something so important does not come along often,” says Steve Jurvetson, DFJ Partner. “This is a moment where the investment potential and the potential to do good for the world are both off the charts. Investors have been watching this space for years, and Memphis Meats has emerged as the clear leader. It is thrilling to watch the teamwork and to try the products, which the entire DFJ team agreed are the real
thing. I am so excited for the future that Memphis Meats will create.”

Jurvetson will join the company’s board of directors.

“We are committed to growing our traditional protein business and investing in innovative new proteins to ultimately provide a complete basket of goods to our customers,” says Sonya McCullum Roberts, president of growth ventures, Cargill Protein.

“Our investment in Memphis Meats is an exciting way for Cargill to explore the potential in this growing segment of the protein market. Memphis Meats has the potential to provide our customers and consumers with expanded protein choices and is aligned with our mission to nourish the world in a safe, responsible and sustainable way.”

The rise of cultured meat has been a key discussion area for several years, with pioneering research from the University of Maastricht leading to the creation of the spin-off company MosaMeat in 2015, but commercial launches still appear to be some way away.