You are in : All News > “Small but mighty”: US researchers examine consumer appetite for microgreens

01 Jun 2020 --- The small leafy green vegetable microgreens that are relatively new to the dining room are being hailed as the next big thing in sustainable fresh produce because they can be quickly grown indoors and with very little water. A study by a Colorado State University (CSU) team indicates there could be a growing appetite for the tiny but tasty microgreens.

“You’ve probably heard of sprouts and baby greens,” says lead researcher and Registered Dietitian Nutritionist Sarah Ardanuy Johnson, an Assistant Professor and Director of the Functional Foods & Human Health Laboratory in CSU's Department of Food Science and Human Nutrition. “These are somewhere in the middle.”

Microgreens are young and tender leafy greens of most vegetables, grains, herbs and flowers that are harvested when their first leaves appear. Their rapid maturity of a few weeks and affinity for controlled-environment agriculture (also known as indoor farming) means they use very little water and can be harvested quickly. 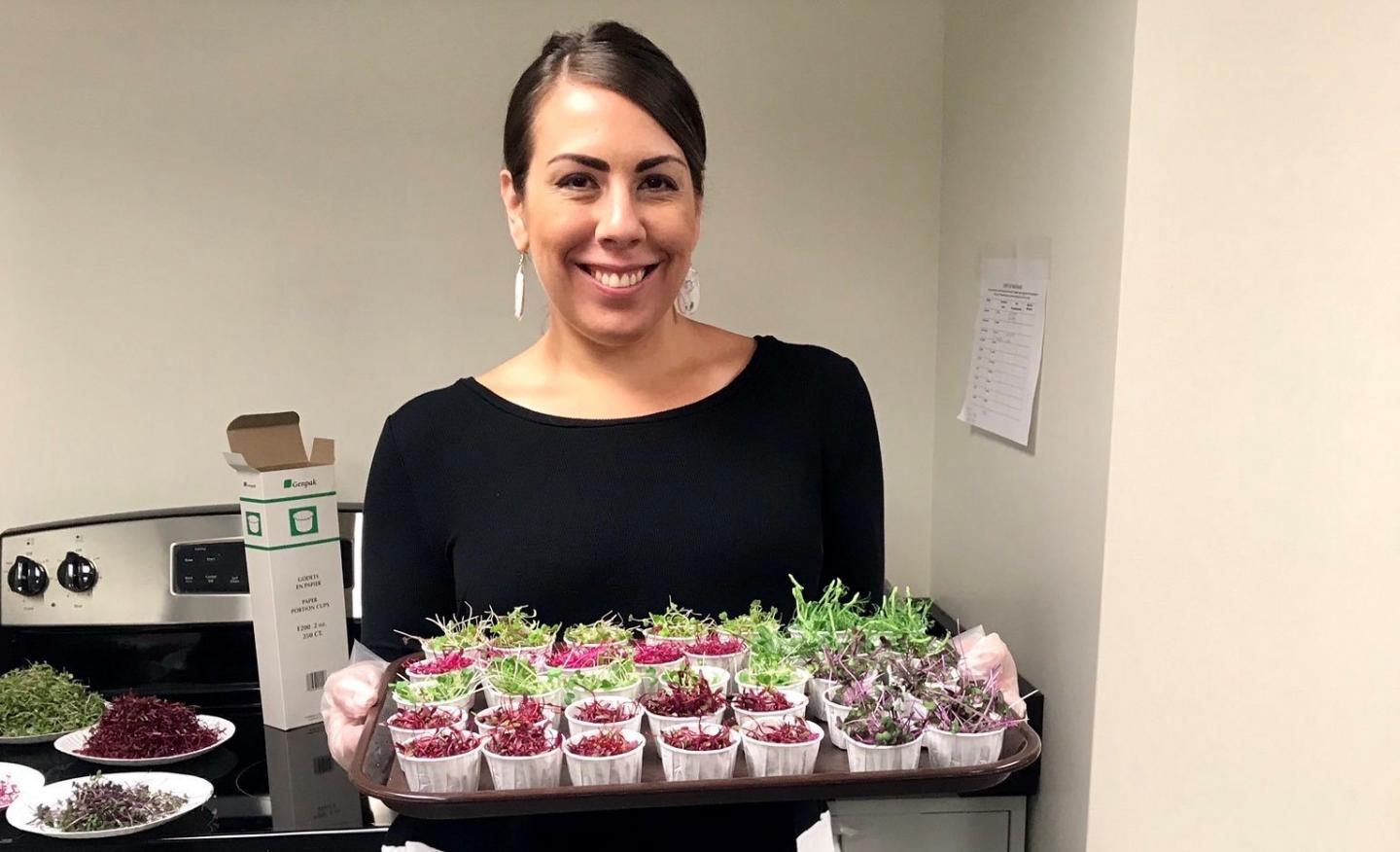 Click to EnlargeSarah Ardanuy Johnson, an Assistant Professor and Director of the Functional Foods & Human Health Laboratory in CSU's Department of Food Science and Human Nutrition with microgreens.It makes them a model of sustainability: they can be grown indoors, year-round, in cities and rural communities, in greenhouses, warehouses, vertical farms and even homes.

Johnson and her researchers wanted to find out if microgreens are acceptable to consumers, and possible factors in how much consumers like or dislike them. They sought to understand if microgreens’ appearance, taste and other considerations make them an appealing addition to people's plates. The findings point to more people exhibiting a microgreen palate.

“I came across microgreens and had never heard of them before,” continues Johnson. “The need for our food to be more sustainable is greater than ever. They can be grown in an urban environment, indoors in big cities and smaller towns. We can't just grow everything in the soil outside anymore, and we need to conserve what natural resources we still have.”

The results of the study were recently published in the Journal of Food Science. Johnson's team surveyed 99 people about their reactions to six different types of microgreens: arugula, broccoli, bull's blood beet, red cabbage, red garnet amaranth and tendril pea. The microgreens were grown in the CSU Horticulture Center. The participants, who didn't know in advance what they would be trying, answered a variety of questions about things like flavor, aroma, texture and appearance.

“Vegetable confetti”
“Some people call them ‘vegetable confetti’ or ‘funfetti’ because they’re small, colorful and flavorful,” Johnson details, adding that they have historically been used as a garnish or topping in restaurants.

The red-colored ones – beet, cabbage and amaranth – received top marks for appearance, but broccoli, red cabbage, and tendril pea got the highest grades overall. Arugula was ranked lowest, on average, likely due to its somewhat spicy and bitter flavor, although many people did like the taste.

Overall, microgreens that rated highly for appearance, flavor and texture also scored lower on factors like astringency, bitterness, heat and sourness. Food neophobia, or the fear of trying new foods, was found to also be an important factor driving consumer acceptability.

“But they were all liked well enough that people said they would consume them and purchase them,” notes Johnson. “I feel like they should be used more as a vegetable and not just a garnish. That's part of the reason why I wanted to do this study.”

Microgreens carry fewer food safety concerns than sprouts because they are grown in an environment with less moisture and, unlike sprouts, the roots of microgreens are removed during harvest. Nutritionally, they have been shown to have higher concentrations of phytochemicals and nutrients like beta-carotene (which can be converted to Vitamin A) than mature plants.

“Vitamin A deficiency is the leading cause of blindness worldwide,” Johnson adds, noting that microgreens may become a key food source for preventing nutrient deficiencies and promoting global health and environmental sustainability.

By 2050, there will be more than 10 billion people in the world to feed, making it more important than ever to think about ways to produce and grow nutritious food, as well as diversify the food supply in a sustainable way.

02 Jan 2020 --- Farmers could soon be growing tomatoes bunched like grapes in a storage unit, on the roof of a skyscraper, or even in space. That is if a clutch of new gene-edited... Read More

30 May 2017 --- In line with Nestlé’s commitment to enable healthier and happier lives and an ever-growing trend towards health-focused cooking the company are aiming... Read More

20 Oct 2016 --- Archer Daniels Midland Company have introduced a new line of unique extracts that can deliver a concentrated dose of the powerful antioxidant compounds... Read More

17 Oct 2016 --- The 2016 World Food Prize has been awarded to a team of scientists for their long-term work breeding vitamin-A enriched sweet potatoes in Uganda and Mozambique... Read More