You are in : All News > Scientists develop “artificial tongue” that screens for counterfeit alcohol 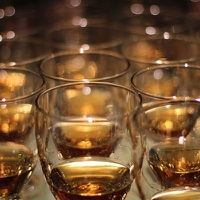 07 Aug 2019 --- An artificial “tongue” that can “taste” subtle differences between drams of whiskey could help cut down on the trade in counterfeit alcohol, scientists say. In a new paper published today in the Royal Society of Chemistry’s journal Nanoscale, Scottish engineers describe how they built the tiny taster, which exploits the optical properties of gold and aluminium to test samples of whiskey. The invention was able to pick up the differences between drinks with greater than 99 percent accuracy, presenting a novel method of testing and quality control across food and beverage applications, according to the researchers.

Sub-microscopic slices of the two metals, arranged in a checkerboard pattern, act as the “tastebuds” in the team’s artificial tongue. The researchers poured samples of whiskey over the tastebuds – which are about 500 times smaller than their human equivalents – and measured how they absorb light while submerged.

Statistical analysis of the very subtle differences in how the metals in the artificial tongue absorb light –  what scientists call their plasmonic resonance – allowed the team to identify different types of whiskeys. The team used the tongue to sample a selection of whiskeys from brands Glenfiddich, Glen Marnoch and Laphroaig.

“We call this an artificial tongue because it acts similarly to a human tongue – like us, it can’t identify the individual chemicals which make coffee taste different to apple juice but it can easily tell the difference between these complex chemical mixtures,” says Dr. Alasdair Clark of the University of Glasgow’s School of Engineering, the paper’s lead author. “We’re not the first researchers to make an artificial tongue, but we’re the first to make a single artificial tongue that uses two different types of nanoscale metal ‘tastebuds’, which provides more information about the ‘taste’ of each sample and allows a faster and more accurate response.”

“While we’ve focused on whiskey in this experiment, the artificial tongue could easily be used to ‘taste’ virtually any liquid, which means it could be used for a wide variety of applications. In addition to its obvious potential for use in identifying counterfeit alcohols, it could be used in food safety testing, quality control, security – really any area where a portable, reusable method of tasting would be useful.”

Boozy innovations
Tech is invigorating the alcoholic beverages space with novel inventions creating new value for beloved drinks. Earlier this week, Californian wine brand Böen, part of Copper Cane Wines & Provisions by Joseph Wagner, became the first wine brand in the US to deploy full-scale, Near-Field Communication (NFC) technology. This new technology, developed by technological visionaries SharpEnd – The Agency of Things and Guala Closures, provides consumers with instant access to information about the wine they are purchasing simply by tapping the bottle’s cap with their smartphone.

In May, the world’s first artificial intelligence-developed whiskey was created by Swedish distillery Mackmyra, in collaboration with Fourkind, a Finnish technology consultancy specializing in AI spearhead projects, and Microsoft. The companies headline this breakthrough as the first time a complex consumer product recipe has been created with machine learning, which may further benefit food and beverage producers in a broader range of applications. Through a dataset analysis, the AI can generate more than 70 million recipes that it predicts will be most popular and of the highest quality.

Last year, UK cocktail mixer company Funkin Cocktails launched the first-ever range of RTD nitro canned cocktails. The slim aluminum can features a fixed nitrogen-infused widget that mixes the cocktail instantly, ensuring maximum product quality and consistency. The Nitro Can technology was devised by Ardagh in 2016 to capitalize on the trend for nitro coffee, and with Funkin’s new range it now enters the fast-growing RTD alcoholic beverage market.