You are in : All News > Booze tech: Microsoft and Mackmyra brew the world’s first AI-generated whiskey

Through a dataset analysis, AI can generate more than 70 million recipes based on predictions of quality and popularity among consumers

13 May 2019 --- The world’s first AI-developed whiskey has been created by Swedish distillery Mackmyra, in collaboration with Fourkind, a Finnish technology consultancy specializing in AI spearhead projects, and Microsoft. The companies headline this breakthrough as the first time a complex consumer product recipe has been created with machine learning, which may further benefit food and beverage producers in a broader range of applications. Through a dataset analysis, the AI can generate more than 70 million recipes that it predicts will be most popular and of the highest quality.

Mackmyra’s AI whiskey, which is expected to hit markets in August 2019, premiered at last week’s The Next Web Conference 2019 in Amsterdam. The beverage’s flavor profile is described as “vanilla with fine oak notes, fruits with citrus & pear, herbal spices with slight tobacco leaves and a very small hint of smoke.” To create this new blend, the distillery’s machine learning models – powered by Microsoft’s Azure cloud platform and AI cognitive services – were “fed” with Mackmyra’s existing recipes (including those for award-winning blends), sales data and customer preferences.

“The main challenge was that the input data for the machine learning was sparse. We knew the ratings and the awards of whiskey blends had received, but some of that data was, in a sense, contradictory. For instance, one recipe could have been really well received by the general public, but not as much in prominent whiskey competitions,” Jarno Kartela, Principal Machine Learning Partner at Fourkind, tells FoodIngredientsFirst.

To remedy the contradictions in data inputs, Mackymyra conducted an internal survey among its flavor experts, to determine precise taste preferences. A discriminant scoring – based on variables such as subjective ratings and awards given to each whiskey blend – was then assigned to each recipe. Once the findings were tallied, the distillery chose the best recipe from its list of top thrity blends. “The whiskey to be launched next August is completely computer generated – we have not altered the recipe in any way,” says Kartela.

Nothing to fear from the AI takeover 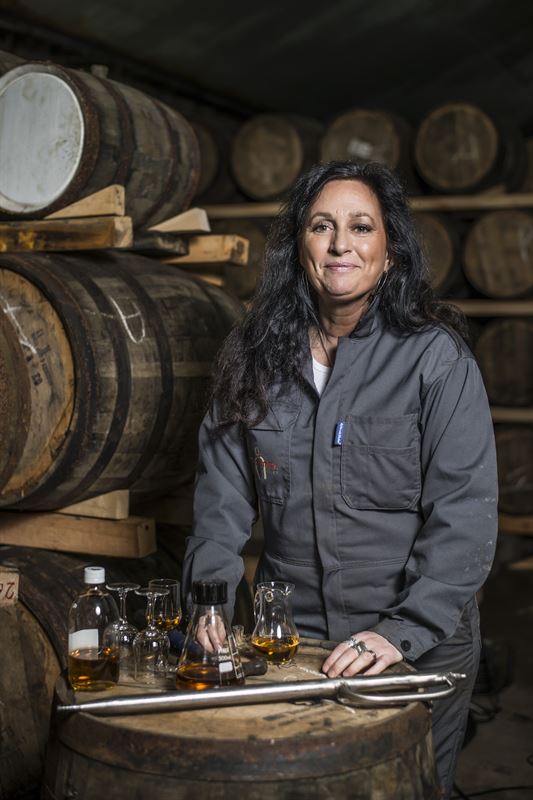 Angela DÓrazio, Master Blender at Mackmyra, says it's important to "strive to challenge the traditions in the very traditional whiskey trade."
AI served to expedite the time-consuming process of whiskey flavor and recipe development. This process is traditionally under the responsibilities of a Master Blender, who can dedicate an entire lifetime to tasting and experimenting with extensive whiskey flavors and combinations. A similar concept was exhibited in November 2017, through Carlsberg’s multi-million-dollar investment in a research study called “The Beer Fingerprinting Project,” aimed at streamlining complex flavor development. Like Mackmyra’s AI whiskey, Carlsberg’s technology harnessed the capacities of Microsoft’s cloud technology to sift through and calculate a vast amount of data.

However, the AI solution is not designed to replace a Master Blender. AI-generated whiskey formulations will still be produced by human hands and subjected to final tastings. “Algorithms don’t have senses, so we need another take on how to understand something so complex as . Although lacking human expertise, we can teach machines to understand what elements previous recipes and products are made of and how they are perceived and ranked by customers and experts,” says Kartela.

Beyond whiskey, AI has already made its way into a diverse range of food and beverage applications – from enhancing the sustainability of agricultural supply chains, to reshaping the processes of flavor development – and is expected to flourish through further technological advancements.

“This AI-generation can have an impact in different industries globally,” a Microsoft spokesperson says. “I envision AI systems generating recipes for sweets, perfumes, beverages, and maybe even sneaker designs. Many of these have already been attempted, but large-scale adoption is still lagging behind. We are showing the way forward, and these new AI solutions can be used to generate products that retain the spirit, look and feel of the brands behind them, while at the same time being new and unique.”

“We always strive to challenge the traditions in the very traditional whiskey trade and that’s something we really do now when we develop a whiskey with the help of AI. We see AI as a part of our digital development, it is really exciting to let AI be a complement to the craft of producing a high-quality whiskey. For me as a Master Blender it is a great achievement to be able to say that I'm now also a mentor for the first ever created AI whiskey in the world,” says Angela D’Orazio, Master Blender at Mackmyra.

While the global market grapples with inflation, one silver lining has been the UK’s nascent trade agreement with the US, which rolls back Trump-era tariffs on... Read More

The use of artificial intelligence (AI) in agriculture poses substantial risks to food security, warns a risk analysis from the University of Cambridge’s Centre... Read More

AI-powered FoodDocs has raised £1.8 million (US$2.4 million) to solve food safety compliance issues in a fraction of the time. The technology is poised to help... Read More