You are in : All News > Scaling back? Price tops US consumer priorities over provenance for fish and seafood, survey finds

Scaling back? Price tops US consumer priorities over provenance for fish and seafood, survey finds 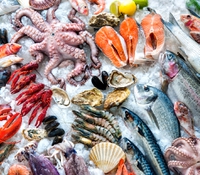 07 Oct 2019 --- A new survey by sustainable seafood brand Blue Circle Foods has revealed that although shoppers are concerned about the provenance and safety of fish products, prices still influence their purchasing decisions. Data from the survey, conducted in the US this September, showed overwhelming concern about contaminants, ocean pollution and overfishing. Shoppers indicated a strong preference for fish and seafood that is certified sustainable; however, cost still topped consumers’ priorities.

The findings from the Blue Circle Foods survey come shortly after the Global Tuna Alliance pledged to end illegal fishing, after it was estimated that the total volume of tuna currently involved in illegal, unreported and unregulated (IUU) activity in the Pacific is 306,440 metric tons, with a market value of over US$616 million.

Marking National Seafood Month, Blue Circle Foods sought the opinions of over 300 consumers in the US. Seventy-eight percent of the respondents had purchased fish or seafood at least once in the previous month, with most believing that fish and other seafood are more sustainable than land-based meats such as poultry, beef and pork. The survey showed that most shoppers think fish and shellfish are healthier than pork, beef and grains, and just as healthy as vegetables, with 84 percent believing fish and other seafood to be an important part of a balanced diet.

“Our survey confirms consumers’ chief concerns and provides us with a great opportunity to help them make choices they can feel good about when buying fish,” explains Nina Damato, Supply Chain Manager at Blue Circle Foods.

“Our ‘Feel Good Fish’ motto is to make sustainable seafood more accessible to all by ensuring 100 percent traceability, third party certification and peace of mind. We raise salmon using innovative practices that eschew antibiotics, growth hormones, GMOs and synthetic pigments while protecting wild fish stocks. The result is certified sustainable salmon that is exceptionally high in omega 3s and free from contaminants,” she notes.

The survey revealed that;

Price dominated the list of ranked attributes that affect purchasing decisions, but shoppers clearly indicated that where the seafood is sourced from, and whether it contains contaminants such as mercury and polychlorinated biphenyls (PCBs), are critical concerns.

Interestingly, the survey mirrored concerns identified by the American Academy of Pediatrics (AAP), which suggest that fears over methylmercury pollution have led to a decline in US families feeding fish to children. The results further reveal positive attitudes generally towards seafood, with 47 percent of shoppers saying that had offered their children seafood by the age of 5. Eighty-two percent of children had eaten fish or shellfish by age ten or earlier and 83 percent of shoppers agreed that their children enjoyed eating fish and other seafood.

Furthermore, the AAP recommends that children, pregnant and breastfeeding women eat 1-2 servings of fish per week, with sustainably caught or raised fish and shellfish offering the best choices.

Aquaculture accounts for more than 50 percent of global seafood consumption, highlighting the need to produce fish more responsibly and efficiently while preserving oceans and wild fish populations. Blue Circle Foods and its partner Kvarøy hope to inspire other producers to use responsible practices, which will, in turn, help to reduce the number of wild fish being caught for aquaculture feed.

Frozen food company Nomad Foods is urging F&B regulators across Europe to develop a comprehensive end-to-end approach to the life cycle of products. This should... Read More