You are in : All News > UN blockchain chocolate experiment gives consumers choice to “give back” to farmers

07 Oct 2019 --- The UN Development Programme (UNDP) is launching a chocolate bar as part of a social experiment. The Other Bar uses blockchain technology to give consumers the choice to donate directly back to cocoa farmers or to get a discount on their next purchase. The FairChain Foundation – who conceived the idea and developed the technology behind the bar – highlights that global brands spend over £500 billion (US$615 billion) a year on marketing, while only £140 billion (US$171.8 billion) is needed to end global poverty.

“Governments and companies have not yet risen to the challenge. They are not making a real, quantifiable change. Hopefully, this experiment will show them that they can do more, from introducing transparency to using marketing dollars more effectively by handing them over to consumers. This is in the form of tokens to redress the imbalance,” Guido van Staveren, Founder of the FairChain Foundation, tells FoodIngredientsFirst.

A limited-edition 20,000 first run of The Other Bar will be available from October 14, with each pack containing a QR-code token with a value equivalent to a quarter of a cocoa-producing tree. However, instead of returning the value to the farmers, consumers also can opt to get 25p (US$0.31) off their next purchase. UNDP and the FairChain society are urging consumers to “Be Radical, Choose, Equality.”

The project originated when Carlo Ruiz, Head of UNDP Inclusive Economic Development Unit in Ecuador, heard a podcast about how Fairchain Foundation and Moyee Coffee were using blockchain technology on projects with farmers in Ethiopia. He then decided to see how something similar could work for cocoa farmers in Ecuador.

“Ultimately, we want consumers to understand that they can take control. It’s not enough for them to buy The Other Bar. We want them to activate the token in every pack that has real value, either to them personally, or to the cocoa-producing farmers. We also hope that they spread the word and seek out products and companies that are making a real change,” says van Staveren.

The results of the experiment will eventually be made public. “We believe that radical transparency can change the imbalance in society, so a cornerstone of the experiment is to explore what works and what doesn’t. We will then share those findings with businesses and consumers so they can make positive changes to eradicate poverty,” he adds.

The Other Bar is made from organic Ecuadorian cocoa and will be available in milk or dark chocolate. Each pack contains two 50g bars and is priced at £2.99 (US$3.67). 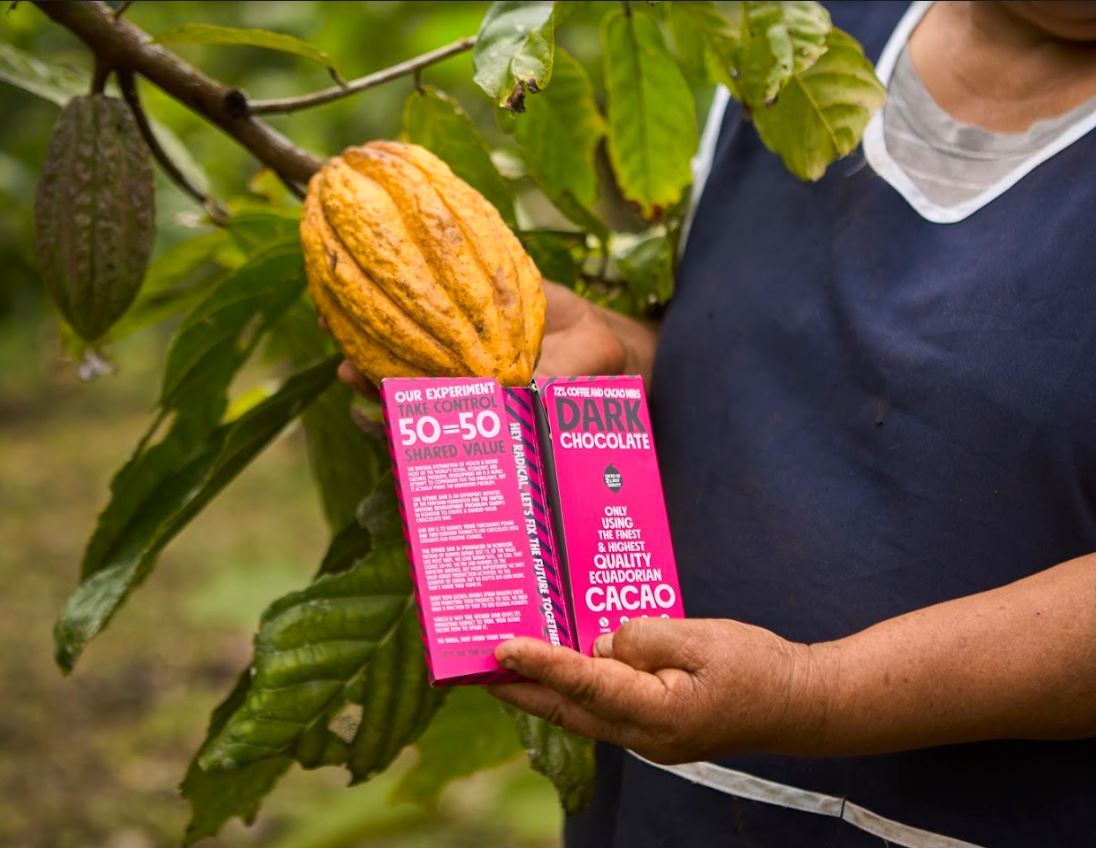 Although paying farmers a fair price for their cocoa is an aspect of the experiment, it also aims to reinforce local manufacturing to improve economic impact, he adds. “The chocolate is produced and packaged in Ecuador, which means more value can be retained in the country of origin. Additionally, this experiment will plant more trees to sustain a future income. New cocoa trees, bought by the in-pack tokens, will increase their future crop yields. This holistic approach goes further than paying a fair price for the crop,” van Staveren explains.

Consumers understand that there is a problem and are recognizing that they can be part of the solution, he continues. “That’s both empowering and rewarding.”

While the current market price from intermediaries for wet cacao is just US$0.25 per kg, Fairchain and The Other Bar pay farmers US$0.43 per kg. There is also a potential from the first run of 20,000 bars to supply an additional 5,000 cocoa trees, which will provide additional income every year for 15 years.

Pleasing the senses: Doehler to present multi-sensory experiences in confectionery at ProSweets 2020

28 Jan 2020 --- More consumers today are looking for healthy added value in their food and beverages – a trend that is also seen in confectionery concepts. At ProSweets,... Read More

24 Jan 2020 --- This week, ice cream and chocolate innovation has been in the spotlight, with Häagen-Dazs launching a limited edition Ruby Cacao collection for its US... Read More