You are in : All News > Meatless Farm targets “lockdown meat-reducers” with provocative ad campaign 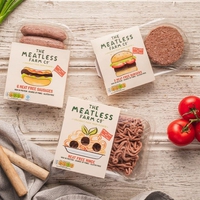 04 Aug 2020 --- Meatless Farm has invested £1.5 million (US$1.96 million) in its most extensive-ever advertising campaign. The M*** F*** campaign is a step-change for the UK-based vegan brand which has built a loyal following on social media but is now aiming to grow its market share by targeting meat-eaters who made the swap during the COVID-19 crisis.

“Throughout lockdown, we’ve seen a surge in sales, with more and more British consumers trying or considering swapping to plant-based, even if it is just once a week,” says Michael Hunter, Chief Growth Officer at Meatless Farm. “We felt the nation needed a bit of a lift as it’s been a tough time for everyone, so more than ever, we wanted to create something light-hearted and fun that consumers would remember when they are looking for alternatives to meat.”

The M*** F*** campaign is a step-change for the UK-based brand. It is now aiming to grow its market share by targeting meat-eaters who made the swap during lockdown.The advert will be the second the company has produced in the last six months after seeing consumer demand for plant-based meat-alternatives increase. The on-pack branding will also get a revamp with the new messaging to further support the “playful” M*** F*** strapline.

In June, FoodIngredientsFirst reported on Meatless Farm research that revealed 65 percent of British consumers feel anxious about the prospect of visiting a restaurant, pub or bar when they were due to reopen. Alongside this, the company launched an online campaign designed to boost consumer confidence and has added a free flow mince and a pasta range to its line of plant-based products.

In the same month, Meatless Farm expanded its range for UK consumers. From June 17, its plant-based mince, two-pack fresh burger patties and a six-pack of sausages became available in 117 of Tesco’s largest stores. The announcement came at a time of enormous consumer change and demonstrated a crucial moment for Meatless Farm.

“Tesco’s reach means that more consumers will have the chance to try plant-based alternatives and start to make small changes to the way they eat. With more and more people swapping to meat-free, added to our constant focus on innovation, health and sustainability, Meatless Farm is well-positioned to continue growing at a phenomenal pace,” said Morten Toft Bech, Founder of Meatless Farm.

Innova Market Insights pegs the “The Plant-Based Revolution” as the second most significant trend expected to influence NPD this year, fueled by growing consumer awareness of the impact of meat consumption on both personal and planetary health. Launches with vegan claims have seen a substantial rise and are becoming mainstream. Innova Market Insights notes a 23 percent annual growth of food and beverage launches tracked with vegan claims (Global, 2015 to 2019).

Moreover, the demand for vegan food is becoming more significant, with more than one in four global consumers saying vegan alternative food launches are most sustainable, according to the market researcher’s Survey Global, 2019.