You are in : All News > Kellogg delays Incogmeato launch amid COVID-19

04 May 2020 --- Kellogg has revealed that it is delaying its Incogmeato brand launch in light of the coronavirus outbreak. CEO Steven Cahillane flags that given the current situation, the company remains focused on supplying the market with food. However, delaying the launch of the Incogmeato brand could hinder plant-based growth, with meat-free launches having been in the spotlight since the pandemic. Kellogg was planning to launch the first wave of products before the summer grilling season began.

“Obviously, it has been nothing close to business as usual over the past few weeks and is not likely to be business as usual for some time. That said, we’re pleased with the direction our business was going prior to the crisis and we’re proud of the work we’ve done to manage the business during the crisis. While managing through this crisis we are also taking prudent steps to ensure stable and dependable performance now and in the future,” said Cahillane in an earnings call last week.

Plant-based sales have been booming since the outbreak, with many consumers trying out new products and prioritizing availability over brand loyalty. Last month, FoodIngredientsFirst reported that Cargill partnered with fast food conglomerate Yum China to launch plant-based KFC fried chicken across China. Meanwhile, Beyond Meat, through a partnership with Starbucks, is set to roll out its plant-based meat analogs in China. The company will begin by introducing its plant-based ground “beef,” branded Beyond Beef, to the new market amid a shift in consumer preferences for plant-based products spurred by the coronavirus outbreak. 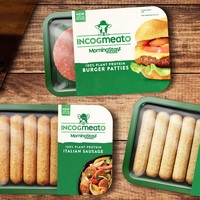 FoodIngredientsFirst reported that the move was a bid to get ahead of the grilling season in the US retail sector. The company has since not given a new timeline yet, so it may still try to look to launch during the later summer months.

The products that “look, cook and taste just like meat” pegged to launch includes the non-GMO soy-based Burger Patties, Original Bratwurst and Italian Sausage that “trick your taste buds.”

The meat analogs made for grilling are marketed for their cooking performance and nutritional value. Patties sizzle and sear just like meat and include 21 g of 100 percent plant-based protein, according to the company. Moreover, the line is 100 percent vegan and contains only flavors that are derived from natural sources. The burgers also are a good source of iron and vitamin B12.

“The category for plant-based meat is still in its infancy,” a spokesperson at Kellogg Company previously told FoodIngredientsFirst. Nevertheless, it is rapidly expanding. The launch is in line with the number two trend from Innova Market Insights for this year, “Plant-Based Revolution.” The market researcher highlights a 59 percent average annual growth in food and beverage launches with a “plant-based” claim (Global, CAGR 2014 to 2019).

“We know that about three-fourths of Americans are open to plant-based eating, yet only one in four actually purchase a plant-based alternative, says Sara Young, General Manager at MorningStar Farms, Plant-Based Proteins.

Meanwhile, sales for many of Kellogg's products have surged in grocery stores as consumers stockpile during the pandemic. Its Eggo brand saw US consumption accelerate by more than 45 percent in March. Also, its MorningStar Farms frozen vegetable ranges saw consumption grow more than 66 percent, stated.

“As our retail partners work to keep shelves filled, many have delayed resets. So we have delayed the first wave of our launch of Incogmeato the MorningStar Farms sub-line of refrigerated meat alternatives. Instead of launching the burger products at the end of Q1, we now plan to launch them along with the previously planned sausage products sometime later this year,” he revealed.

“North America had an unusual month, to say the least, and this unusual environment continues. We’ve shifted investment out of the first half given the current situation and into the second half. And for now we remain focused on supplying the market with food and keeping our people safe. It will be some time before conditions stabilize. Nonetheless, we feel good about the underlying direction of this business and the year’s delivery just got much more front-weighted to the first half,” added Cahillane.

Along with the rise in demand for some products, Cahillane flagged that he has seen “extra costs that come with keeping up production during this tumultuous time.”

The coronavirus outbreak has pushed calls for reductions in meat and dairy consumption, a theme which was already in the spotlight, fueled by growing consumer awareness of the impact of meat consumption on both personal and planetary health.

New research by the Friedman School of Nutrition Science and Policy at Tufts University and Cleveland Clinic Lerner Research Institute has quantified the risk of... Read More