You are in : All News > Hemp and Health: The French art of nutritious bakery shines at SIRHA Europain

Hemp and Health: The French art of nutritious bakery shines at SIRHA Europain

29 Mar 2022 --- French mills are diversifying from their staple white and rustic breads to incorporate more health-oriented flour blends. Higher protein and fiber content with chickpeas and lentils are among the most sought-after ingredients. Meanwhile, supplemental nutrients such as vitamins, omega fatty acids, biotics and functional ingredients like caffeine are entering the space.

NutritionInsight speaks with industry experts on the show floor of SIRHA Europain, taking place March 26 to 29 in Paris, France.

“But developing specific ingredients that allow bread to be more than just a staple food, it a great added value for the industry.”

The increased focus on health is also evident in new classes offered by Paris-headquartered Le Cordon Bleu. The international culinary school founded in 1895 will offer a nutrition course for the first time in its history this summer, with a “pastry and wellness” course to come out later this year.

Moulins Dumée’s Chanvrine bread bears a slight green color and hemp seed inclusions.Powered by hemp
Health-boosting ingredients were the center of innovation in the new product lines introduced at SIRHA Europain. The star ingredient that ticked all the boxes was hemp seed.

In this area, Moulins Dumée launched its Chanvrine flour mix for bakery derived from the French word “chanvre,” meaning “hemp.” The company notes that the added ingredient imparts plant-based protein, insoluble fibers that aid satiety and digestion, as well as the antioxidant vitamin E and omega 3s and 6s.

“Nowadays, the bakery industry is innovating to make healthier products,” says Nicolas Legrand, sector director at the company. “You have to keep up with the competition.”

Maxime Debat, bakery advisor at the Bourgeois School, supported by Moulins Bourgeois, explains that the bread is not 100% hemp and flaxseed flour.

“There is also wheat flour to balance out the texture and taste. Hemp seed comprises 20% of the final mix.”

Hemp seed is also being leveraged as a bread inclusion, often mixed with other seeds to balance it out. Jérôme Roussel, director of Panemex, which creates inclusion mixtures for bakeries, stresses that hemp seed must be toasted for a good flavor. 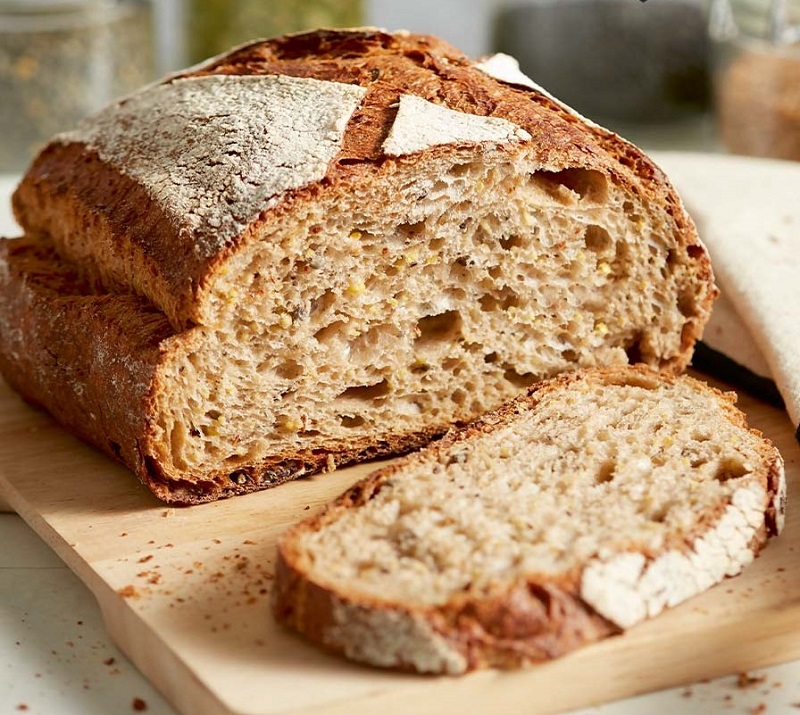 Berrouga bread has 21% protein compared to a standard baguette of 11% and is positioned toward vegan consumers (Credit: Grands Moulins de Paris).He also says that in its whole form, hemp seed doesn’t confer real nutritional benefits. “We don’t speak about the health benefits of hemp seed inclusions because the ingredient must be ground up to deliver these.”

Creative origins for plant-protein
Lesaffre describes how consumers in developed economies look for so much more in bread than just to satiate their hunger. Consumers are looking for health benefits, but also traditional products and breads with emotion or stories.

The newly launched Berrouga flour by Grands Moulins de Paris taps into both health and provenance trends, boosting nearly double the amount of protein compared to normal French bread with a name that speaks to its origins.

Berrouga has 21% protein compared to a standard baguette of 11%. The innovation received SIRHA Europain’s product innovation award for its health and provenance focus.

The name Berrouga comes from a combination of ‘Beluga’ from the protected name Beluga lentils and ‘Berry,’ the French region where the bread’s einkorn wheat variety and green lentils hail from.

“The origin is very important to us. Everything is 100% French, so we use local products to reduce our carbon footprint,” says Johan Couavoux, international sales director at Grands Moulins de Paris.

“The Berrouga mix can make bread, of course, but the flour mix is also very versatile. For example, we did a demo using the flour in a vegan burger bun to help supplement protein to consumers who want to eat less meat.”

“We studied which ingredients could make certain claims in France and used them in our breads,” explains Vincent Wattez, founder of Maison Wacols.

The Le Tonique variety, for example, is a turmeric-colored yellow bread promoting protein and energy content. It contains pumpkin, tomatoes, flaxseed, rice protein and guarana for an energizing effect.

Other blends include Le Soutien, which provides hemp, chia seeds, mint, spinach and lentils. The presence of lentils allows the bread to list immunity as a benefit via its naturally occurring prebiotics, while the mint supports digestion claims.

Meanwhile, Le Banacao allows for magnesium claims via the natural presence of magnesium in bananas.

For example, in developed Western markets, vitamins K2, D and B9 (folic acid) have been flagged as important vitamins missing from modern diets.

In collaboration with its nutrition unit, Lesaffre has already tested the addition of various nutrients, such as K2, in bread which can help support bone health and healthy aging.

“Tests so far have shown that K2 survives the baking process and this is also true for B9, also known as folic acid, which is important for pregnant women.”

Last September, the UK announced that folic acid fortification in bread would become mandatory to prevent some 200 birth defects per year.

Researchers have also proposed bread as a medium to correct D deficiency, which is linked to higher healthcare costs in cancer patients.