You are in : All News > Fonterra reports losses, unveils simpler business strategy amid divestments

26 Sep 2019 --- Fonterra’s FY19 annual results reveal a net loss after tax of NZ$605 million (US$381 million). The world’s biggest dairy exporter is now introducing a new customer-led operating model that aims to deliver a target of 50 NZ-cents per share in five years. The company also recognizes the growing market for new foods as a challenge, and will now supplement with non-dairy “where it makes sense.” Additionally, the co-operative will sell its 50 percent share of DFE Pharma for NZ$633 million, which combined with other asset sales, will provide NZ$1 billion for debt reduction.

Normalized earnings before interest and tax (EBIT) were NZ$819 million, down 9 percent; free cashflow was NZ$1,095 million, up 83 percent; and the return on capital was 5.8 percent, down from 6.3 percent.

However, there were some successes. The gross margin from Fonterra’s largest business, New Zealand Ingredients, was NZ$1,332 million, up 3 percent on last year due to increased sales and price performance. Additionally, Fonterra’s normalized earnings per share for the year was 17 cents, which was above the last forecast for the year of 10-15 cents. 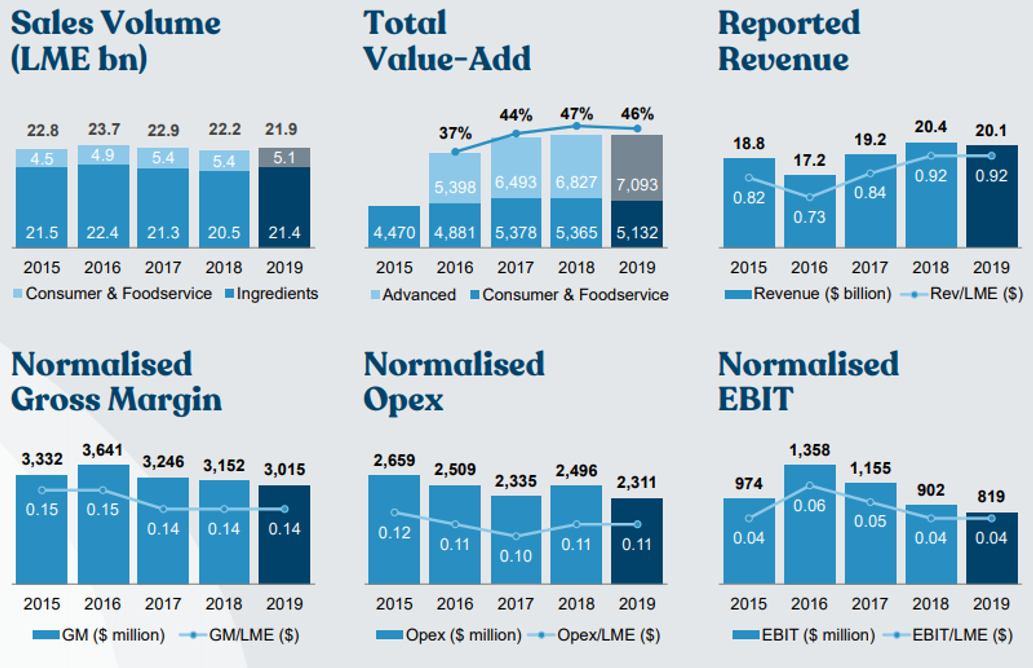 Fonterra saw disappointing results for FY19. (Source: Fonterra)“As we do every year, we took a hard look at our asset valuations and future earnings potential. When it came to DPA Brazil, Fonterra Brands New Zealand and China Farms, we saw there were either some changes in their local economies, increased competition or business challenges impacting their forecast earnings. This meant we needed to reduce their carrying value,” says Fonterra CEO Miles Hurrell.

A new strategy
The company also revealed a new strategy centered around the goals of healthy people, healthy environment and healthy business. A shift from volume to value is part of this. “Eighteen months ago, we may have said we’re a global dairy giant here to make a difference in the lives of people through a volume ambition. Today, we stand for value,” says Monaghan.

“While we will complement our farmer owners’ milk with milk components sourced offshore when required, we will start rationalizing our offshore milk pools over time. Our strategy will see us focus on world-class dairy ingredients for our customers around the world, and innovative ingredients that meet nutrition needs right across people’s life stages. The ingredient categories we will focus on include pediatrics, medical and ageing, sports and active, and core dairy,” Hurrell explains.

The company also plans to build on its foodservice success in China and developing new markets, particularly in Asia Pacific. The majority of the products sold in these markets are made from New Zealand milk and are similar to those sold in Fonterra’s Ingredients business.

Additionally, Fonterra will now prioritize New Zealand milk and complementary components instead of focusing on global milk pools. There will also be an increased emphasis on improving its environmental footprint to help mitigate risks associated with climate change.

Continuing divestments
Another element of Fonterra’s strategy involves divesting non-core businesses instead of investing widely based on aggressive growth plans. The NZ$633 million sale of its DFE Pharma share and significant contribution from Tip Top will give the company NZ$1 billion available for debt reduction.

“We have sold our share of DFE Pharma to CVC Strategic Opportunities II, a fund managed by CVC Capital Partners. The private equity and investment advisory firm manages approximately US$83 billion of assets in 73 companies worldwide,” Hurrell says.

The sale to CVC Strategic Opportunities II is made up of a cash payment of NZ$537 million, payable on completion of the sale, plus an interest-accruing vendor loan of NZ$96 million, for a term of up to 15 years. Built into the deal is a potential additional payment of up to NZ$44 million based on DFE’s performance over two years.

“As part of the three-point plan (take stock of the business, get basics right and ensure more accurate forecasts), we also set a goal in FY19 to reduce our debt by NZ$800 million. Tip Top made a significant contribution and, along with the sale of DFE Pharma, we expect to exceed this target in FY20,” says Hurrell.

The company will also close its Te Roto, New Zealand, specialty cheese-making facility in a “very tough but necessary” consolidation move. “The specialty cheese business has been losing money in having to run the two sites. This change will consolidate costs and make it sustainable to continue in the category,” says Brett Henshaw, Managing Director at Fonterra Brands New Zealand.